The Beatles shindig at the Saville 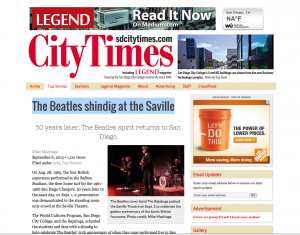 On Aug. 28, 1965, the four British superstars performed at the Balboa Stadium, the then home turf for the 1961-1966 San Diego Chargers. 50 years later to the exact day, on Sept. 1, a presentation was demonstrated to the standing room only crowd at the Saville Theatre.

The World Cultures Program, San Diego City College, and the Bajabugs, schooled the students and fans with a shindig to help celebrate The Beatles‘ 50th anniversary of when they once performed live in San Diego.

Chuck Gunderson, a Beatles historian and author of the book “Some Fun Tonight,” delivered a trifecta of information from the days leading up to that epic “Yesterday.” Rare archived videos and photos depicted on the movie screen, combined with Gunderson’s narrations, not only educated many of the third to fourth generation offsprings from that era, but also rekindled the rock and roll inception once witnessed by the baby-boomers in the crowd and performers up on stage.

“I was five-years old in 1965,” recalled Hector Penalosa, the founder of the Beatles cover-band performing this special day. “… The Beatles cartoons were on Saturday morning on NBC … and I had a babysitter who bribed me (by buying a toy) to go see the movies because she wanted to go see ‘Help!’” It was here where the Sir Paul McCartney inspired, bass guitar player and vocalist for The Bajabugs, started understanding Beatlemania, the new “long haired” movement of the post JFK times.”

Gunderson played a couple of number one hits from artists prior to the 1964 British Invasion, such as Bobby Vinton and the song “Dominique” by singer-songwriter Jeanne Deckers, better known as The Singing Nun. He then played “I Want to Hold Your Hand,” to demonstrate how much of a drastic change the Fab Four brought to the radio status quo of that era. 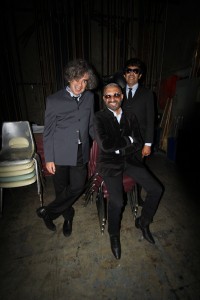 Oodles of Beatles’ historical images were presented from a half century ago, but not your typical “Tiger Beat” magazine clip-art. Photographs and microfiche screenshots of contracts; tickets; itemized expense reports; behind the scene fan-club meet and greets; production itineraries were some of the visuals that Gunderson unveiled. Political beef between two radio stations of the time were also divulged.
This golden anniversary lecture was enlightening, yet entertaining.

Nick ‘NICO’ Peters, the Bajabug who looks and plays like Ringo Starr, reminisced about being four-years-old and “… going to a now defunct department store (called) Whitefornt in La Mesa, and knowing the Beatles because my sister had all (of) the albums. I knew (that) B-E-A-T-L-E-S- spelled Beatles, (and also) saw the apple label of the ‘Hey Jude’ single.” 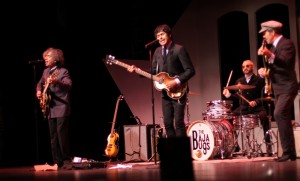 This time brought about Peter’s early admiration for the group, which unknowingly set up his destiny in 1999 to sing with his three buddies to form the San Diego based Beatles cover-band, not to be mistaken with the term “tribute band.”

“… And then you got the tribute aspect of it which is (then) suddenly you’re in the theatrical arena of not just being a musician, but where you got to be an actor with props, costumes, wigs, you’ve got mannerisms, and possibly the accents”, explained Penalosa, “… we the Bajabugs are not actors, we are musicians.”

The distinction of the two styles mentioned by Penalosa was obvious. The energy and performance from his band were solely derived from the good rock and roll music they were performing, as The Beatles did on the same stadium shared by the SDCC Knights.

The Bajabugs’ performance opened with “Twist and Shout,” then followed by ten more hits. “I’m Down” was the closer of the thirty to forty minute set which brought some new and old fans to their feet.

As George Harrison once said, “The Beatles will exist without us.”