“I was sick, I had bad kidneys, I didn’t have medication, (and) I was dying of blood poisoning in the hospital parking lot … then my car, ‘a teeny Datsun hatchback’, got stolen,” four-time Grammy nominated folk and country singer Jewel recalled. “But (at least) I wasn’t in it.”
The crowd ironically laughed, considering this experience once happened a few miles away from the venue, and that she also had lived out of that same car. This was the vibe for the night; gritty details with humorous optimism, but this wasn’t always the outlook that Jewel shared. 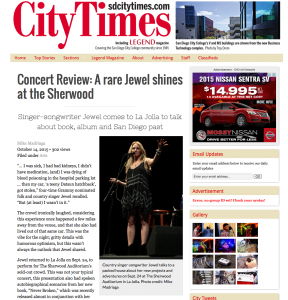 The original editorial ran on the print and digital edition of the City Times newspaper on Oct. 13, 2015.

Jewel returned to La Jolla on Sept. 24, to perform for The Sherwood Auditorium’s sold-out crowd. This was not your typical concert, this presentation also had spoken autobiographical scenarios from her new book, “Never Broken,” which was recently released almost in conjunction with her new album release, “Picking Up the Pieces.”

The night began with personal attributions and inspirations to each song performed during the one and a half hour set of four songs. The rest of the night was dedicated to signing autographs, taking photos, and greeting her fans.

Jewel started the night with her 1995 debut song, “Who Will Save Your Soul.” Prior to the performance, she explained how she had written this during the trek from her fine-arts high school in Michigan, called the Interlochenin Center for the Arts, all the way down to San Diego.

She states on her website: “At spring break all kids had to leave the campus. But I couldn’t afford to get to Alaska, so I decided to learn 4 chords on the guitar (my dad had always played guitar, not me) and got on a train in Detroit to busk my way across the country. I made up lyrics about what I saw traveling. It took several days to sing my way across the country – earning my ticket money one street corner at a time when the train stopped. I made it to San Diego and crossed the border into Tijuana, and hitch-hiked to Cabo San Lucas.” 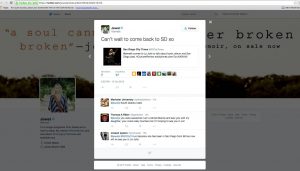 No fancy lights, jumbotrons, teleprompters and smokescreens were present at this venue; simply Jewel’s six string acoustic guitar, a mic and her well articulated, yet witty-comedic storytelling.

Jewel’s live music that she performed this night was as authentic as the memoirs that she shared with the enthusiastic crowd, to which while on stage, she entertained 15 minutes of non-scripted question and answers. One inquiry came from a five-year-old boy and his mother, whom reminded her of her own four-year-old son, Kase.

“Hands” was the next song that she performed, in which prior to singing, she spoke of the 9/11 tragedies that happened while she was vacationing with her then boyfriend and now ex-husband, professional cowboy Ty Murray. This is where she witnessed half-massed flags while descending the mountains they were hiking. Jewel dedicated the song to the victims, less than a week later after the deadly attacks, on the “Late Show with David Letterman.”

A brief history of her and her father’s difficult relationship was revealed. “My Father’s Daughter,” a country song in which she sang a duet with Dolly Parton (not present this night), followed. Her father, Atz Kilcher, was one of her bigger inspirations (and teacher), aside from her fans and grandparents, as stated on her website: “You have all helped make my dream come true. And the dreams of Ruth and Yule Kilcher.”

During her discussion about her father, she reminisced hitting the Alaskan roads with him and her brothers at eight-years-old to perform at bars. This is where she said she “learned to read the crowd.” Her “Valley-Girl meets Clueless” comedic undertones brought light to some of the darker recollections narrated to the all-age audience. 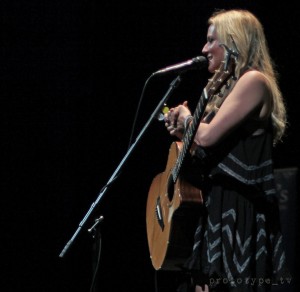 “I like this idea where ‘nothing can be broken if it’s really open’ and also ‘the gratitude you give is something that always soothes your own problems and your own anxiety’,” Jewel said as she closed with her final song “Mercy” from her latest album.

Jewel’s unique guitar fingerpicking and strumming techniques are sometimes overlooked, while most are focused on her personal experiences sang via her earthy lyrics and tremendously wide vocal range. Twenty years after her first hit was played on the 91X radio station, Jewel has since metamorphosed as an artist, which now takes a back-seat to her own growth as a self-healing humanitarian, and mother.

Can’t wait to come back to SD xo https://t.co/wVbKpfKSNE 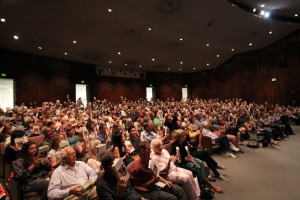 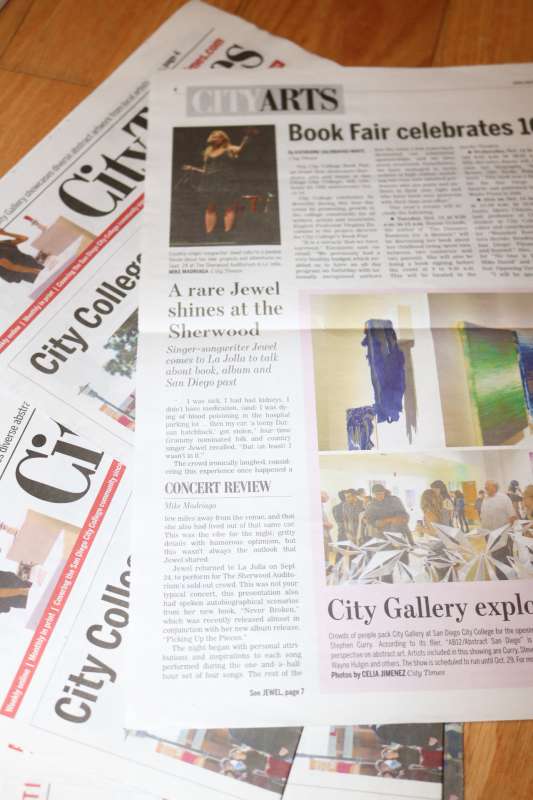