Rosario Dawson on the Four Corners

“Four Corners of Death” popped up when a City College alumna posted a photograph on Instagram hamming it up with Rosario Dawson.

On May 27, at 4:30 p.m., approximately 60 to 70 people converged on the corner of the Imperial and Euclid avenues in support of Sen. Bernie Sanders. Many of his supporters were holding up large posters, sporting “Bernie” t-shirts, passing out flyers and stickers to the cars, blowing whistles – and eating ice-cream.

Zulema Diaz, a City College graduate, was waiting in line for her complimentary scoop. 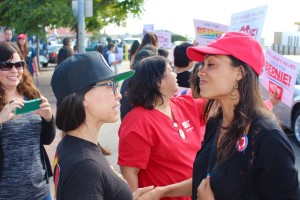 “I think that this corner is important because it represents the ‘working class’ community,” Diaz said. “These communities are equally important and deserving of equal representation in politics.”

The corner is one of the busier intersections in San Diego with two-three lanes on each side of the road that lead to and from the Interstate 805 and 94 highways.

The intersection has been notorious for gang-related homicides in the last few decades, but word on the streets is that “things are changing here.”

Bruce Carter was walking on the west side of Imperial Avenue passing out fliers to cars, trying to persuade the drivers of cars stopped at a red light to honk their horns as they waited.

“I just wanted to go to the hood man, and sometimes you gotta get in the thick of it,” said Carter, a business coach who founded Black Men for Bernie, “a ‘call to action’ movement to unite black men.”

“There’s life, children and excitement, you are showing people that everything can be rejuvenated, restored if you invest in it,” Carter said, “and that’s why I like Bernie – it’s about opportunity.”

On the sidewalk, many mothers and children took selfies with Dawson, a film actress from New York. 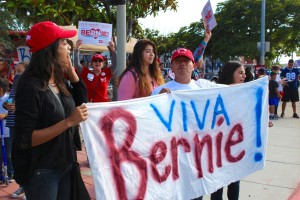 “I hope that you are out there and organizing and making sure that there are as many people as you know that are registering to vote,” Dawson said to City Times. “You can vote early. I’ve already voted.”

Diaz said that she too was voting for Sanders.“As a Latina (as well), I am very aware that one way to achieve upward mobility is via education,” Diaz said, “and I like what I hear about what (Sanders) has to say about education.” After Diaz received her Associates degree in Liberal Arts in 2004, she said, she obtained her bachelor’s in Literature at UCSD.

“I’m positive that Bernie is going to help with the tuition fees and I really like his politics on immigration,” Diaz said. “We have a lot of students (at City College) who are transfronterizo students, students coming from Tijuana, AB540 students; somebody like Bernie is acknowledging that people like this exist.”

The National Nurses United was providing the free scoops of Ben & Jerry’s Ice Cream. One of the nurses dressed in red said that the flavor was “cookie dough.”
Erin McLeod was one of the nurses helping out at the rally. “He’s the one that shares our (nurses’) values: caring, compassion and community,” she said.

After Diaz ate her ice cream, she hammed it up with Dawson for a couple of photos, spoke briefly about their mutual support for Sanders, and then parted ways.

Published in City Times in June 2016 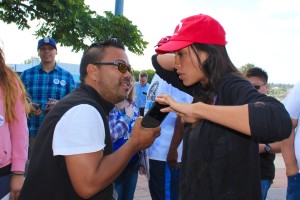