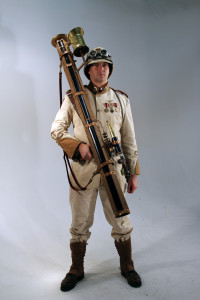 A fictional steampunk character from 1890 roams our campus; his name is Col. Malcolm Weatherby.

The steampunk term was coined in 1987 when author K.W. Jeter combined the two words — “steam” and “punk” —  to describe his “Morlock Night” and “Infernal Devices” books that were set in the 19th century. The manner that the future was envisioned at that time period; combined with the victorian era attire — is what steampunk embodies.

In the world of costuming or cosplaying, there are styles such as superheroes, monsters, anime and steampunk …. “and cosplay is broken down into a few categories,” Ferrell said, “makers, actors and models.”

People from all over the U.S. converged at the Town and Country Hotel and Resort to attend the sixth annual Gaslight Gathering — to “focus on the steampunk and victorian aesthetic, art, costume, gadgets, and history.”

“People make costumes to express their creative talents and bring characters from pop culture alive through costume,” Ferrell said. “The number one thing to understand is that people do it for different reasons, but all bring life into fiction.”

Ferrell has been cosplaying since 2002 and back then he was asked to play Jack Sparrow for a community haunted house. Here is where he learned to make the costume and play the part.

“Some are excellent actors that make any costume come alive with the mannerisms of the character,” Farrell said, “and some just simply wear a costume either purchased commercially or made by professionals.”

“Col. Weatherby” is Ferrell’s latest creation. He displayed the ensemble at the San Diego Comic Con a few months ago and since then has changed it for the gathering. “I changed the color scheme from red, black and white to mostly brown and tan,” Ferrell said.

He conceived the character when he initially purchased a pith helmet at a previous steampunk gathering and then he researched how they were used back in the 1800s.

“I learned about British soldiers and uniforms of the time period,” Ferrell said. “I fashioned the costume after an 1890 British officer from the Boer War.”

Ferrell said that he invested about $500 into the fabric and materials to create his costume; the shoes and his hat were purchased commercially.

Some steampunk costumes with prosthetics and makeup are said to take hours to piece together but Ferrell’s only takes about 15 minutes.

“I have been the winner of some small Halloween party contests but I stay away from big competitions,” Ferrell said. “I use my steampunk characters as a way to promote my artwork [business]: ‘Colonel Malcolm Weatherby’s Steampunk Arsenal.’” 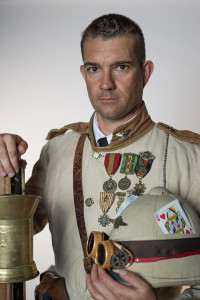 When Ferrell isn’t working on his creative endeavors or protecting our campuses (he covers both City and Mesa colleges), he might be instructing college staff how to protect and defend themselves in a real life crisis. Last year Ferrell graced the cover of our City Times paper. The story was regarding an ALICE (alert, lockdown, inform, counter and evacuate) program that he and others from the EMRT (Emergency Management Resource Team) taught to City College staff — on how to prepare for an active shooter on campus.

Ferrell has been working with the SDCCD Police Department since 2000 and is a City College alumnus. He took media communications and Russian classes back then.

When I asked if the two worlds of law enforcement and cosplay ever crossed over, his response was: “Once, I was asked to put together a scenario similar to the Beslan (Russia) school attack. I was dressed as a Chechen rebel.” 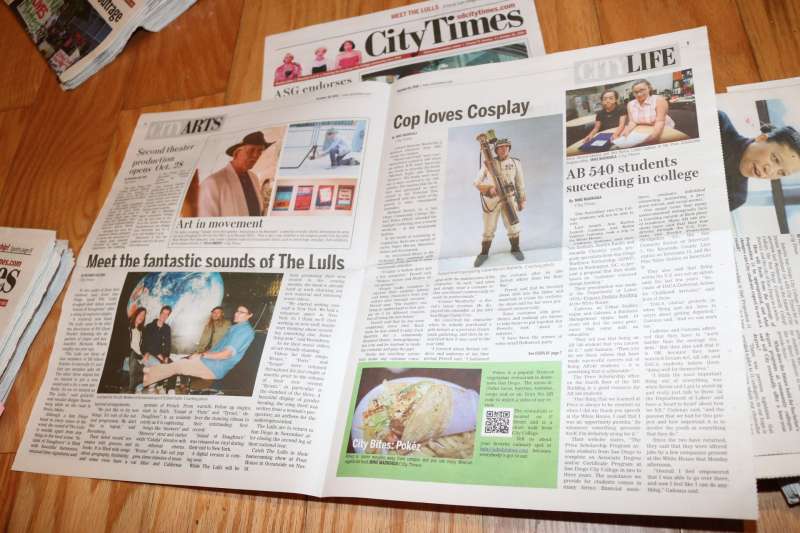