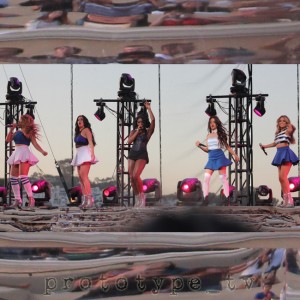 On June 23, Fifth Harmony performed at the San Diego Fair.

The majority of the crowd screaming this warm night were children ranging from elementary school all the way to high school. Many parents chaperoned their kids in because of the “free entrance” promo for the 12-and-under fans.

The energy was loud prior to the band’s dramatic walk-out, because of the group’s highlight videos playing on the jumbotron screens.  One clip playing caused an uproar. It was when President Barack Obama introduced the group in front of Sasha and Malia, his and Michelle’s daughters.

“Reflection” which doubled as their album title song released on Feb. 2015, was the first song performed on the chrome platform. The crowd then lost their composure when Camila Cabello sang her solo, because her vocal range is wide and edgy.

The kids can relate to the pop group because some of the girl’s personal experiences were written and reflected into their music.

“Going Nowhere,” which was a bonus track on their album, followed. Then “Worth It” was next, which brought up the energy one more notch, because it’s their hottest to date selling over one million copies in the U.S. The song’s gritty beat, Kid Ink’s raps, and mature-feminist approach, make some forget that #5H are still predominantly in their teens.