Last October, the Concourse Center in San Diego was the 4th stop of the Body Art Expo tour. It’s an ongoing “About the Artist, for the Artist” exposition that travels to various cities to unite world-famous tattoo artists and up-and-comers and piercers with collectors looking to get new ink or piercings on the spot. A variety of tattoo styles were available from the artists at the show including tribal, traditional, comic, black and gray, portraits, new-school, and custom. Dozens of body piercing and modification professionals were working side by side with lifestyle clothing, jewelry, and collectibles vendors. Whether you were in the market or just curious, this assemblage of avant-garde skin intensification was one not to miss. 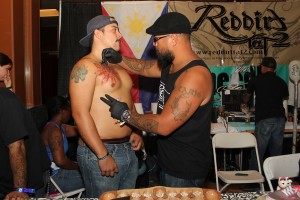 Upon entering the expo, tattoo fans were welcomed by the Sideshow guys from Scream’n Ink—The Deacon, a 12-foot-tall gentleman (on stilts) with green hair, and his two sidekicks, Mick Taylor and Jason Rigstad. The trio entertained the crowd with stunts and painful excursions throughout the show including their excruciating cinder-block routine.

Whether one was seeking traditional or fusion islander ink, the Expo had the best of both worlds. One of the artists from Kokopelli Ink sketched a Venom versus Spidey piece to commemorate the San Diego Comic Convention, which took place in the same Concourse Hall almost 40 years ago.

CeeZ from Reddirt was laying the groundwork for a Philippine flag on his client; J. DeMartino from Solid Gallery One, re-created a beautiful Alex Gray rendition on his client’s shoulder; and Morgan Deeble, from Original Tattoos, wrapped up a Beauty and the Beast collage on Michelle, who drove two hours from Long Beach to get there.

During the tattoo contests, we met Andrew, a boy who, when he was just five years old, tattooed his father Joe. To the right of them stood Brad-G, one of the contestants. He showed-off his portrait collection done by Mike Rios. It included Miss Piggy, Edgar Allen Poe, Chevy Chase, Sade, and the late Robin Williams. Now that’s a great after-party in itself. 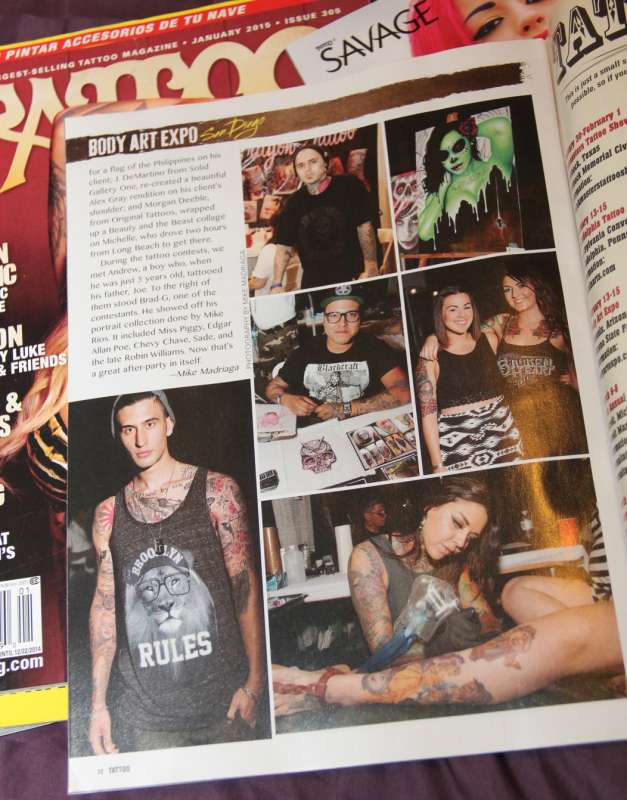