In July of 2006, Bergenholtz brothers contracted Mike Madriaga and his friends from Prototype TV to shadow their race crew and their Mazda 3 race car at the Las Vegas Speedway.

“Man we remember hearing about these guys at the illegal drag races back in the 1990s, they would clean house until the five-o [police] rolled up, then it was off to the next clandestine spot,” reminisced Mike Madriaga.  “These brothers were always ahead of the game.”

Many that raced back in the 1990s also remember when the brothers busted out their CRX with wheelie bars at the Battle of the Imports races in Palmdale.  “I think it was like 1997 or something like that,” Madriaga said.  “That was epic because no one could understand the logic behind placing a set of real-wheel-drive wheelie bars on a front-wheel-drive car.”

That day, the brothers created import car race history by breaking the quarter mile record of the time.

“Ron and Ed were always a few car-lengths ahead of us,” Madriaga said, “even off of the track.” 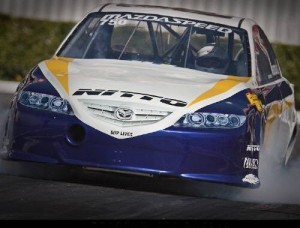 Fast-forward to 2006.  Carlos Soria was Madriaga’s assistant this day.  He was filming with the old-school Canon XL-1 on the track. “It was 135 degrees out there,” he said, “about 25 more degrees than the rest of Las Vegas.  I tried my best to keep the camera still despite the commotion and heat.”

The Bergenholtz crew stuffed ice down in the intercooler of their Mazda and kept the turbo cool enough to help propel them to win their race at the end of the video.