The American flag barely moved on August 2. The sound of thunder wasn’t from the gloomy skies above but from a caravan of motorcycles here in town for national Bikers for Christ weekend.

“Close to 400 bikes showed up to our gathering this day,” said Pastor Z, the organizer of the meeting atop Mount Soledad. Bikers trekked from as far as New Mexico, Texas, and Nevada; Bikers for Christ membership spans all 50 states and to 23 countries. “My brothers from Bikers for Christ helped make this happen, and let’s not forget the support of our Jesus Christ!”

Pastor Z and Machete star Danny Trejo were greeted by American war veterans at the top of the stairs. Pastor Z pulled out his megaphone and whispered, “We are going to start this off the right way, with a word of prayer.”

A big dude down on the grassy section yelled, “I can’t hear #@it,” which caused a few indistinct shouts from others in the crowd. 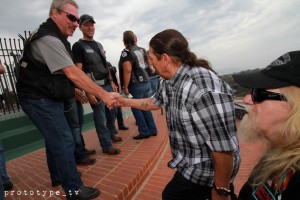 Many of the bikers present were angered about the prospect of the cross being removed. One of the Vietnam vet bikers stepped up and yelled, “When they take this [cross] down, I’m going to be the first to lay down. When they take me and my bike away, who amongst you will replace me?” Many of his brethren stepped forward.

I found one guy who opposed the cross. Paul M., an atheist and a 20-year military veteran dressed in civilian clothes. Paul’s soft-spoken response to why he is opposed to the cross’ presence was, “We need to separate church and state,” but when I asked what bothered him about the cross, he responded, “Because I do not believe in —”

We were then split by a group of bikers walking between us. “Mike,” yelled one of them, “let’s get some grub at the Harley spot on Kearny.” I was happy to oblige. But when I looked for Paul to continue the interview, he had disappeared into the crowd. As I looked to interview more people from the other side of the issue, the rainfall increased. I covered my camera gear and ran to my car. As I loaded up my gear, Paul found me and finished up his take on the cross. 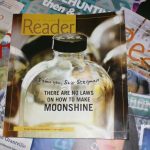 Featured in the San Diego Reader and Military Press magazines in August 2014.

“Back then, this cross did not signify a war memorial,” he said. “It was built to scare away the Jewish community!” After talking to Paul for a few more minutes, the rain subsided and the cul-de-sac was back to normal with mostly tourists roaming about.

I spotted Trejo and Pastor Z putting on their helmets. Before Trejo got on his bike, he turned to the camera and said, “Can’t touch a war memorial — remember that — or Machete will come looking for you!”

Pastor Z had no threat, but a suggestion: “If people get offended by what this country was founded upon, they might want to consider moving.” 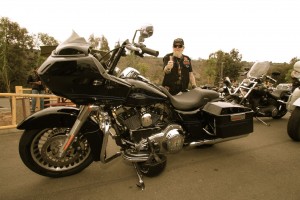 Pastor Z is about ready to hop on his 2009 Harley Davidson Road Glide. 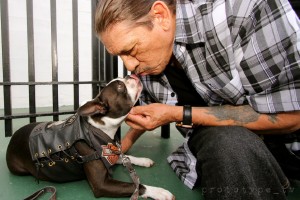 Danny Trejo and his buddy, Chopper the Biker Dog. 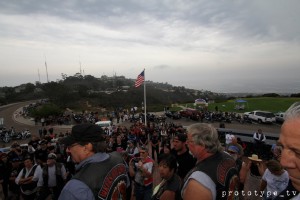 Bikers for Christ looking down at the horizon, as more bikes turn in from Soledad Mountain Rd. 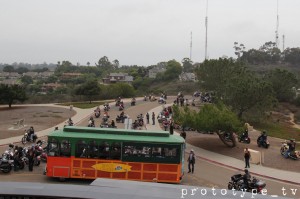 Over 300 motorcycles roll in from all parts of the U.S. and Mexico. 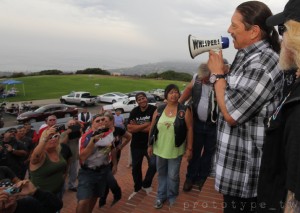 Danny addresses the crowd about his concerns. 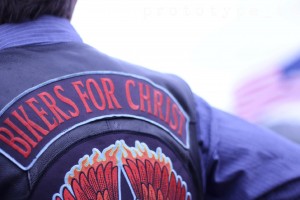 Bikers For Christ has over 3000 members nationwide. 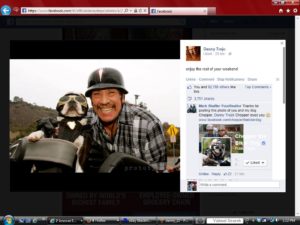 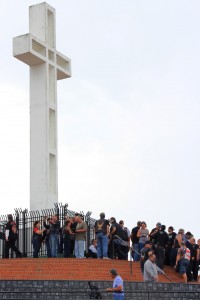 The war veterans await Danny and Pastor Z at the base of the cross. 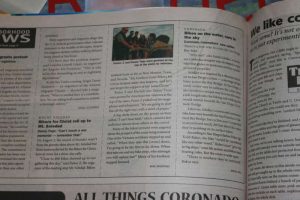