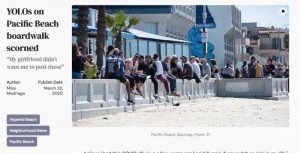 “I believe I had this COVID-19 virus a few weeks ago,” said Sunnie. “I never felt so sick in my life.”

Sunnie, 54, from Pacific Beach and a registered nurse, requested we not publish her last name.

I sent Sunnie a direct message on March 22, hours after Governor Newson called on young people to obey the stay-at-home order he made a couple of days earlier.

I asked Sunnie to look outside of her window and explain what the Pacific Beach section of the boardwalk looked like.

“There are still many people today,” she said, comparing the crowd to the photos by her 28-year-old-neighbor, Max Nodland.

“Mike, the wall photo was taken at 1:12 pm on March 21,” Nodland said to me in a direct message, “that was in front of Woody’s in Pacific Beach.”

On Nodland’s series of photos that went viral over the weekend, the Pacific Beach boardwalk, which is about two blocks away from his home, appeared packed with visitors not following six-foot social-distancing. On his wall photo, San Diegans sit inches from one another; on another photo, over 30 strollers walk on the boardwalk, inches apart.

“My girlfriend didn’t want me to post them because she thought I might get the beach shut down,” said Nodland, an e-commerce specialist and amateur photographer, “and we’ve been using walks on the sand as a way to get out of the house; the people on the sand were doing a great job of distancing.”

Photographers around San Diego County and Tijuana are capturing empty streets and freeways that would normally be bustling with activity and then posting the “surreal and lifeless” photos on social media.

“I was hoping it was dead and brought my camera to take some pictures of what I assumed would be an empty beach,” Nodland continued, “and when I got there — I was somewhat surprised.”

A couple commenters blamed the “YOLO [You Only Live Once] post-millennial spring breakers” for being out and about, in which the commenters were likely swayed by recent mainstream reports of Florida spring breakers congregating and “super-spreading” on their beaches.

“I saw a ton of spring breakers here last weekend,” Nodland said, “there seemed to be fewer this weekend. Today there was a wide age range represented — definitely not skewing young. I think the bulk age range was between 25-45.”

Cristbel Adams from Imperial Beach lives close to their pier about 21 miles south of PB; she direct-messaged me an Instagram video of “yolo spring breakers.”

“People are still hanging out like nothing, and not respecting the social distance,” she explained. “Look, Mike, I’m originally from Venezuela, and I have been in many lockdowns there; the difference is that in my country the military takes actions if you don’t follow the rules.

“And we are supposed to be in quarantine and they say we have to stay home, [yet] there’s a farmer’s market open in Little Italy. I just watched the news and they said it’s OK. as long as the people keep the social distance.”

Nodland and IB residents noticed surfers surfing by both of their piers.

“There’s nothing bad about surfing,” opined Adams, “because they just jump in the ocean alone, [keep their distance] and go back home without social contact.”

Others not heeding our governor’s orders by staying home are still practicing social distancing as they hike and mountain bike out in the boondocks, and many are heading east to off-road in the desert by El Centro and Yuma.

San Diego kids and teens are seen hosting dance parties with live DJs, and forming group chats where they are video conferencing and dancing in their parents’ and guardians’ homes.

For 21 and up San Diegans, they now have the option of picking up alcohol packed hand-mixed drinks, or they can have them delivered to their homes. On March 20, a “Notice of Regulatory Relief” passed by the California Department of Alcoholic Beverage Control, went into effect, and states in part: “bona fide eating places (i.e., restaurants) selling beer, wine, and pre-mixed drinks or cocktails for consumption off the licensed premises may do so when sold in conjunction with meals prepared for pick-up or delivery.”

Over the weekend “young San Diegans” were reportedly congregating at Chula Vista, Ocean Beach and Pacific Beach house parties, with over ten individuals, and playing loud music and consuming alcohol — disobeying the “boomers” in their lives.

“Actually the young are the future so maybe stop acting superior since you aren’t,” posted a female on her social media. “And if you really think we aren’t struggling in this garbage heap of a world that has been passed down to us to fix, then you are very mistaken and arrogant. It’s fine though, it will definitely be a struggle for you when you need us to take care of you in your old age if this kind of mindset continues. And yes it’s harsh but it’s getting really old hearing people bash the younger generations when they are the only ones who will be around long enough to make a significant difference.”

At about 2 pm on March 22, Nodland sent me a photo of the boardwalk and it appeared as packed as the day before when his photos went viral; mainstream news reported of the San Diego Police Department blocking access to city of San Diego beach parking lots.