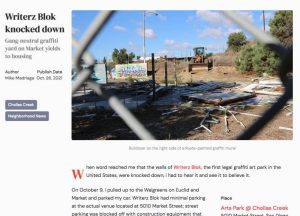 The original story was featured in the print edition of the San Diego Reader on November 3, 2021.

By Mike Madriaga
When word reached me that the walls of Writerz Blok, the first legal graffiti art park in the United States, were knocked down, I had to hear it and see it to believe it.

On October 9, I pulled up to the Walgreens on Euclid and Market and parked my car. Writerz Blok had minimal parking at the actual venue located at 5010 Market Street; street parking was blocked off with construction equipment that day.

I proceeded across the Chollas Creekside Park bridge and noticed birds’ chirps and other fauna noises were distinct, despite road noise coming from nearby traffic rolling in via the 805, a mile to the west, and the 94, about a half-mile to the north.

As I strolled southbound on the trail, Writerz Blok was on my right side. I peered inside the eight-foot fence topped with barbed wire, and I could see inside the 10,000-square-foot, former hip-hop-inspired venue. A bulldozer sat dormant on the right side of a Ruste-painted graffiti mural that remained intact. In the previous years, I photographed and videoed the transformation of the walls here for the Reader; on the recent Saturday, some of those same walls were toppled over and lay in the landscape’s bark and rocks; the bark and rocks were installed when the venue was re-branded in 2018 as Arts Park @ Chollas Creek. I’ll always remember this place as Writerz Blok, where I interviewed artist Brisk One; his abstract mural was still standing and not tagged on. Other walls didn’t fare so well, particularly the walls that stood eight-feet tall and extended to 30-feet wide, half the length of a boxcar. They were decimated and pieces lay atop a wooden platform I once skated.

One audible detail was missing in the Chollas View neighborhood atmosphere as I snapped photos: rattling ball bearings and “pchiiiiiiiit” — both sounds emitted from aerosol-paint cans.

Jose “Krown” Venegas, the venue’s former program coordinator, assured me and the estimated “500 youth, community members, visitors, and artists from around the world” that used to visit the graffiti yard every month, that the Writerz Blok yard will return, one day.

“We’ll be getting another yard,” he said October 9. “That is needed in the community, wherever you are at. It’s in the making, and we’re talking to some real estate friends of my supervisor; it’ll be an art park/school because we will continue teaching and have classes and workshops in the future.”

He said he couldn’t go into too many details about what had happened. “It sold, and it’s going to be used for condos, low-income housing, and whatnot.”

Venegas grew up in Shelltown, and when he was a kid in the 90s, he used to “catch a tag” illegally with half-empty cans left behind by the ‘OG’ graff-painters. Then, in 1999, he grew wiser, and he transitioned to painting full-blown 3D art murals. He hung out with Graff Creek, a graffiti art program founded by Jacobs Center for Neighborhood Innovation. Then, in 2003, an unknown source donated the half-acre facility on Market Street to the Jacobs Center. Included were office space and a large yard, which became Writerz Blok.

Here, Venegas worked beside Sergio Gonzalez to run the “gang-neutral and creative space that encouraged artistic expression and entrepreneurial exploration while providing an alternative to gang membership.” When SDPD caught kids tagging, police officers would bring first-timers to the graffiti yard as a “get-out-of-jail-free card.” So Venegas and Gonzales, for free of charge, taught kids here how to spray-paint artistic murals (legally), work on graphic design programs, and screenprint their own shirts on the facility’s manual press.

Back to October 9, 2021. Venegas was dismantling the shed that once housed parts of the graf-yard’s screen-print machine.

“We put all the equipment in storage, and most of the walls are going to get tossed. I do have a couple of pieces that I have collected over the years from different artists that were painted at Writerz Block, and we’re probably going to put those in the new shop for the heavy equipment.”

“The land for Writerz Blok was always set for redevelopment and buildout,” a Jacobs Center spokesperson said on Oct. 26. “To ensure continuity and provide it a strong home Writerz Blok was transferred to an excellent partner in UPAC (Union of Pan Asian Communities).”