“Ultimately [the police] caught me by my name being on the side of the car, not blurring out my license plate, and I didn’t expect the video to go that viral.”

Blake Wilkey, 27, was the owner and driver of the 1967 VW bug (aka Shark Attack) in the YouTube video titled “Urban Assault,” posted on January 22 (2016). In the video, he is shown driving and jumping the 700-horsepower off-road vehicle through a few towns in San Diego. The video got over one million hits in a short period of time after it was posted (that number was at 1,634,357 on May 26). 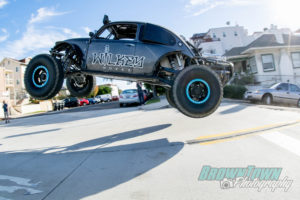 On May 22, Wilkey rolled out to the fourth annual Air Cooled Fiesta VW car show at Southwestern College, one of the only places he could legally visit because it was “work-related.”

“I had to do two weekends at the downtown jail, 45 days of house arrest — unless it is to and from work only,” Wilkey said. “It’s just been a major drag.”

Prosecutors hit Wilkey with a 65-page itemized list of locations, speed assessments, and an infraction, which “snowballed” into 26 charges.

“I went to court, we settled for six misdemeanors — four reckless driving, exhibition of speed, and failure to obtain a permit,” he said.

He was the only one charged and sentenced; the video production team, Perplexed Media, was only questioned. Wilkey said he spent almost $8000 in legal fees and is on probation for the next three years.

At about 1 p.m. on May 22, Wilkey geeked out with Sgt. John “Hoss” McAvenia of the Chula Vista Police Department.

“This is our fourth year and not a single problem [here] ever,” McAvenia said prior to Wilkey approaching his patrol SUV. “This is a pretty mature crowd and everyone gets along well.”

McAvenia wouldn’t comment about the notorious video — but he did say he watched it.

Wilkey and McAvenia talked for about ten minutes and took photographs of and with one another. McAvenia snapped a picture of Wilkey’s inner bicep, where he’s got a tattoo of his old VW bug. 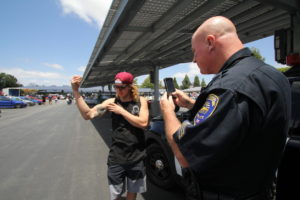 Wilkey eventually approached the stage, where the Baja Bugs were performing Beatles music, and passed out his Wilkey Works stickers to the kids and a few adults.

Luis Corona, an auto painter and VW fanatic from Ensenada received a sticker. He called Wilkey chingón (bad-ass) and invited him to race in the Baja 1000.

“I started the car when I was 17 years old, back in 2005,” said Wilkey about the Shark Attack bug. “I put about 70 percent of my paychecks into that car. It wasn’t something that I saw a profit in at the end — it was something that I built for fun.”

“We had a couple of days to do the ‘Urban Assault’ video before the car was going overseas,” said Wilkey. “It was something that I always wanted to do.” 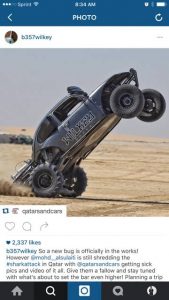 Wilkey posted a photo on his Instagram on January 17 and captioned it: “I miss my girl. Probably the worst decision of my life selling it!!!”

On March 16, Wilkey reposted a video of his Shark Attack VW on Instagram. The video shows the new owner, @mohd_alsulaiti, “driving her hard” in Qatar.

Wilkey is currently working on another VW bug that he says will be faster and jump higher than Shark Attack. 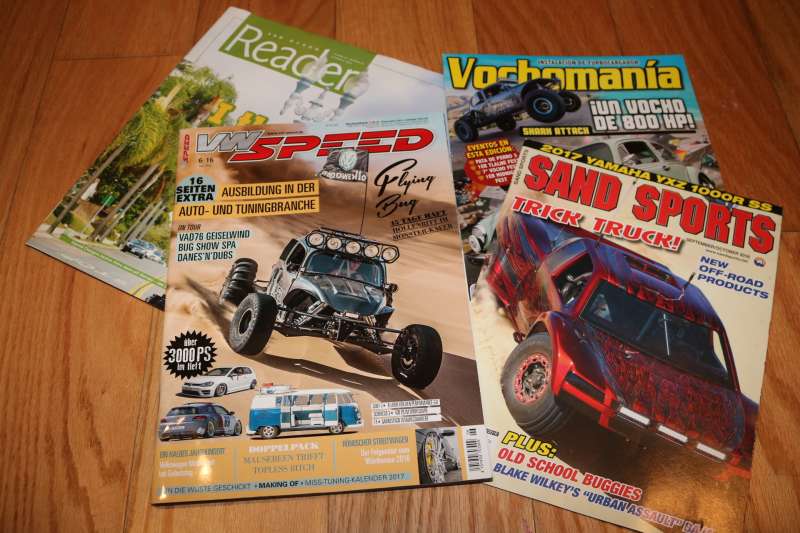 Mike Madriaga freelances for worldwide publications. In 2016, this article was published in the U.S., Mexico, and Germany. 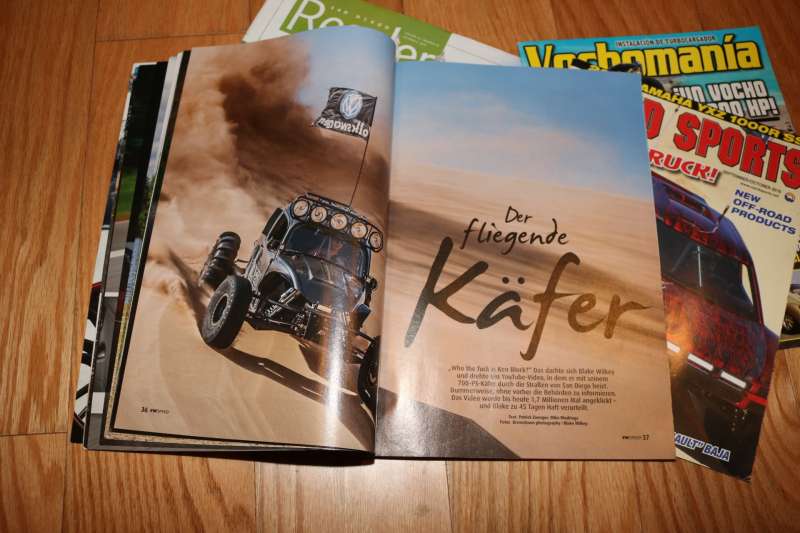 VW Speed is the largest Volkswagen magazine in Germany. 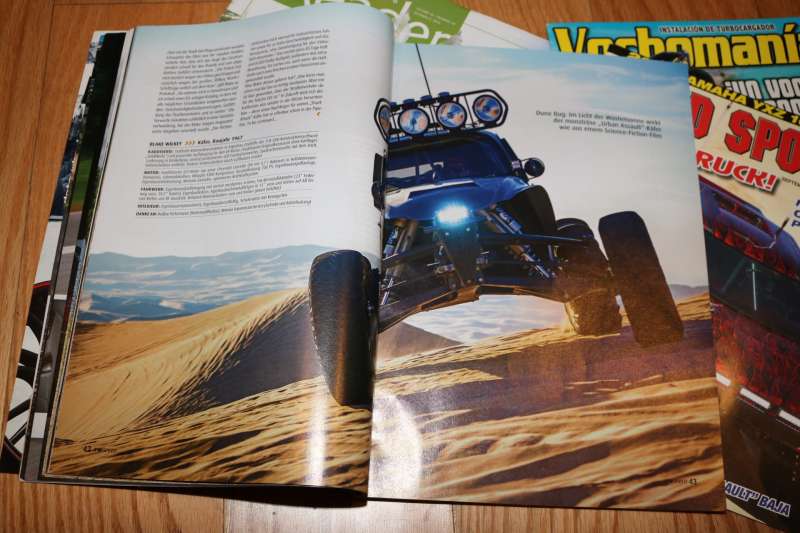 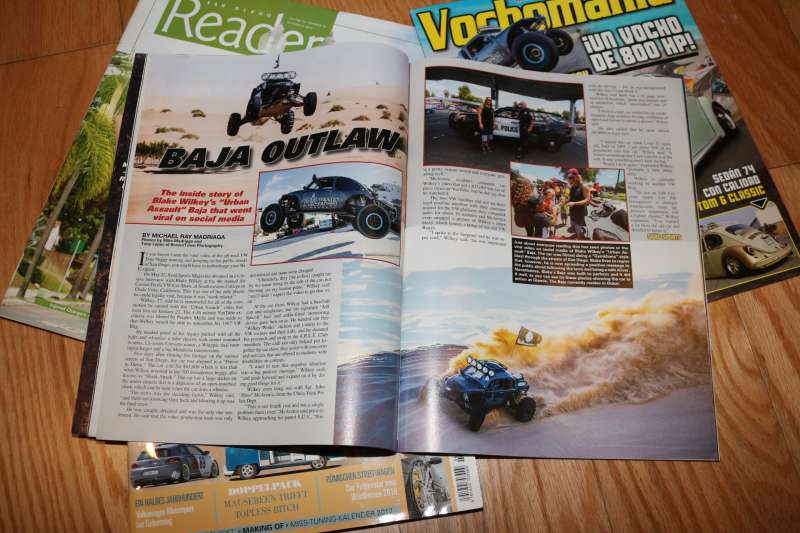 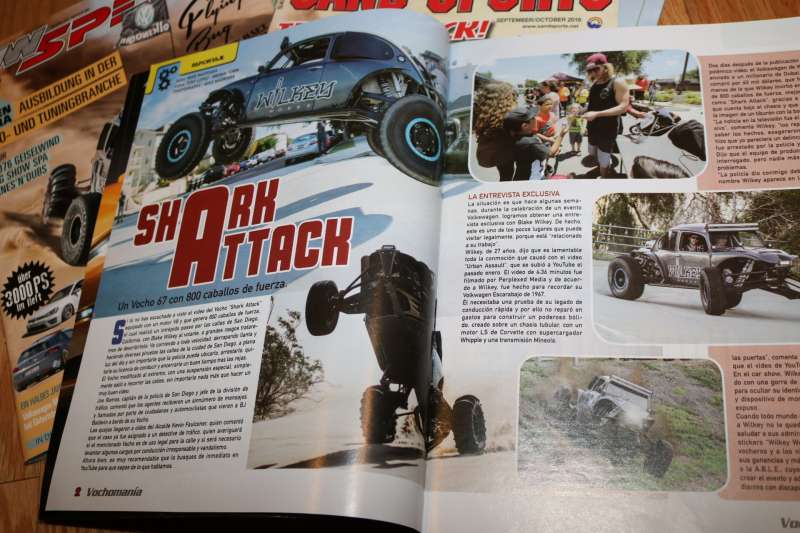 Vochomanía was a Mexican-based publication that was sold on newsstands since 1995. 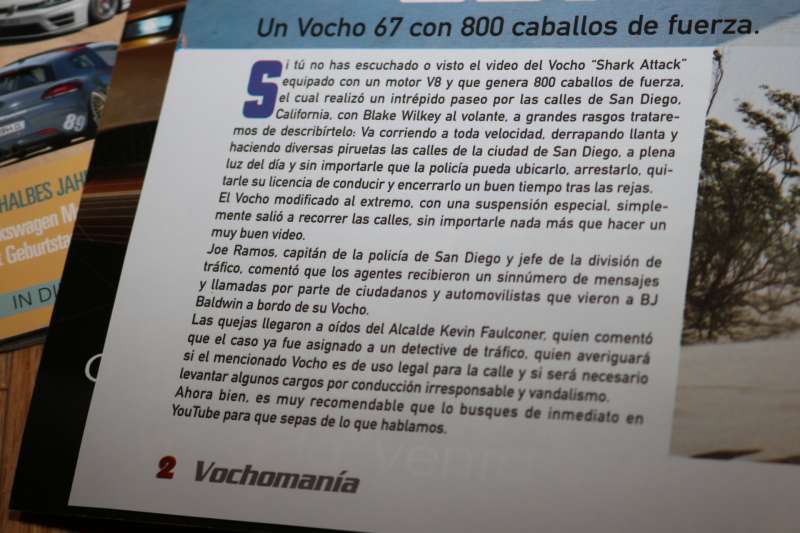 Vochomanía is a Mexican based publication that has been sold on newsstands since 1995.