Where Weed and Wrestling Meet 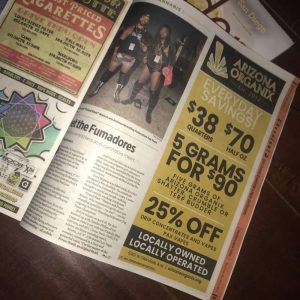 The original story was featured in the print edition of the Phoenix New Times in May of 2022.

By Mike Madriaga
Pro wrestler “Grand Slam” Watson was on a good trip at the recent Cannaval music festival and cannabis expo at the Phoenix Events & Entertainment Complex.

Not because the Phoenix-raised 5-foot-11, 205-pound Arizona Wrestling Federation (AWF) Tag Team champion just smoked a fat blunt. But because reality had just kicked in.

“I’ve never seen anything like this where people are out here smoking weed and wrestling,” he yelled into the Phoenix New Times microphone.

That dramatic changes stem from the fact that since Arizona legalized marijuana, local promoters have been pushing the boundaries of melding the experiences of concertgoers and consumers.

And because this was a novice experience for concertgoers and consumers alike, many who assembled by the wrestling ring grew worrisome as parts of the wrestlers’ demeanors shifted during the interviews.

Even Watson was taken back; his voice dropped a few decibels. “As somebody who lived in Arizona for six years, I never thought I would see people walking around outside smoking marijuana.”

“Grand Slam” Watson and Fresco Mattic, who requested to go by their pro wrestling monikers — “or else” — are the reigning Arizona Wrestling Federation Tag Team champions.

Before sunset on April 30, the duo teamed up with Xander Philips of San Diego to duke it out with Leo Cañedo, Sexy Fabrizio, and SDC (Some Dude Chillin’) in a three-on-three wrestling match. 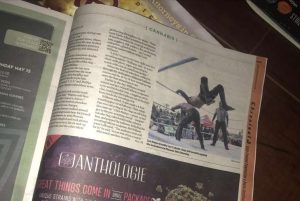 Mattic, a 6-4, 225-pound Las Vegas wrestler, continued in a deep and powerful voice. “I’m the master of the Fresco Bomb, an original finish that destroys all opponents; old boy saw that tonight in the ring.”

That’s Mattic’s signature move, where he grabbed Fabrizio from the rear, hooked his arms underneath Fabrizio’s arms in a full nelson, picked him up, and slammed him to the mat.

Then, the Arizona champions double-teamed Cañedo in the squared circle, tossing him into the middle of the ring — setting him up for Phillips.

Philips climbed onto the top turnbuckle, leaped backward into the west Phoenix airspace, did a backflip, and landed on top of Cañedo to pin him.

The ref counted “1, 2, 3,” and Phillips and the Arizona champs raised their arms in victory.

“We pretty much took out the trash when it came to that,” Watson said facetiously. “They didn’t stand a chance.”

Many of the 6,500 festival attendees cheered for the Arizona champs.

The wrestlers mingled and took photos with the 21-and-up crowd, the 18-and-up patients with cards, and the other talent performing throughout the venue. There were Lucha Libre wrestlers from Mexico, 18 samba dancers, six rotating aerial acrobats, jugglers, stilt walkers, fire performers, unicyclists, glassblowers — and award-winning master balloon artist Cody Williams.

“I didn’t expect to be here right next to a wrestling match,” Williams said. “It was a show-style piece, super interesting to watch with a lot of crowd interaction.” 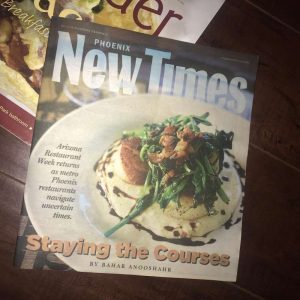 The original story was featured in the print edition of the Phoenix New Times in May of 2022.

When the festival attendees walked in through the main gates, Williams’ balloon station and the 18-by-18 foot wrestling ring were the first attractions to see.

Earlier in the day, Williams created animal and pot-related balloon sculptures so he and his buddy Dan, a juggling unicyclist, could pass the balloons out to the fans from inside the wrestling ring.

Williams added, “I also made a 4-foot wrestling guy out of balloons. Then when Dan was unicycling in the ring, an evil wrestler came up.” Chris Nastyy — a heel, or bad guy in the pro-wrestling circuit — jumped into the ring, talked trash to the Arizona fans, and popped the balloons, including the wrestling balloon sculpture. But Willams wasn’t offended. “The audience went wild for it,” he said, “it was a lot of fun to watch.”

Afterward, another wrestler came in and pounced on Nastyy.

Throughout metro Phoenix, weed and pro-wrestling showcases like this were unheard of — until now.

Watson, the Arizona champ, explained, “Like just before the 2020s, here in Arizona, they were still pushing the books to people getting caught with marijuana; I got hit with the books. Do you know what I mean? So it’s like now, you see cops walking around here — I wouldn’t be surprised if one of them hit a blunt.” 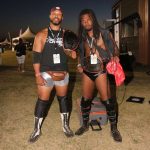 “It’s crazy to see that and how different it is that people are just open about it.”

But it’s not just Arizona weed smokers who grappled with medicating and recreational usage in public. The relationship between pro wrestling and weed consumption was taboo, only spoken about in code in locker rooms.

“I think it’s actually changing nowadays,” Watson said. “The reason why wrestlers weren’t admitting to smoking weed for a while, I think, it’s because in WWE, the main stage, it was against the rules.”

World Wrestling Entertainment, Inc., which is shortened to WWE, is the largest professional wrestling promotion company in the world. The WWE website proclaims that any competitor who tests positive for marijuana shall be fined $2,500 per positive result. 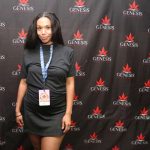 Erika McKendree was at one of the 94 vendor booths at the event; she repped the Genesis Bioceuticals company.

But according to various wrestling fan websites, the pro wrestling company is pretty lax about the rule.

Many pro wrestlers from the 1980s through the 2000s are finally speaking openly about their marijuana use, including Norris “Bones” Jarmon, a San Diego-based pro wrestling trainer who trucked in and assembled the wrestling ring at the west Phoenix venue. He’s also the wrestling promoter who booked the wrestlers and luchadores.

For years, “there were a lot of us that smoked weed in the wrestling industry, on the low,” Jarmon said. “Rob Van Dam (RVD) allegedly had difficulty with pro wrestling management because of weed. But obviously, they got over it because now RVD is in the WWE Hall of Fame.”

Van Dam wrestled with the WWE, Extreme Championship Wrestling (ECW), and Total Nonstop Action Wrestling (TNA)/Impact Wrestling leagues beginning in the early 1990s, and on and off until recently. He is a longtime user and proponent of cannabis products. Now 51, he has transitioned his pro wrestling career into creating RVDCBD, a cannabinoids company. It specializes in CBD and cannabis paraphernalia — which a few Phoenix-based dispensaries at the event stock on their brick-and-mortar shelves. 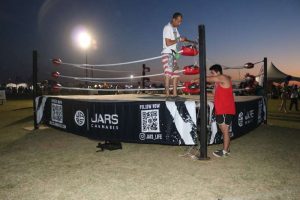 Norris Jarmon (top): “There were a lot of us that smoked weed in the wrestling industry, on the low.”

Then there’s The Godfather — who made a guest appearance at one of Jarmon’s wrestling events. In a recent Table Talk interview, he told the hosts he smoked a “one-hitter” inside fellow wrestler Undertaker’s coffin prior to a WWE show. “I swear that’s true. … I smoked in the coffin,” he said. The 60-year-old Godfather also said he began medicating with cannabis at 27 to get off painkiller pills.

“I watch these wrestlers, these older wrestlers, and they’re all banged up,” Jarmon continued. “There’s not an old wrestler who doesn’t have some ailment or something wrong with their knees. And they take painkillers and other things to block the pain. The Godfather hasn’t taken a narcotic pill since he was introduced to cannabis.”

Erika McKendree was at one of the 94 vendor booths at the event; she repped the Genesis Bioceuticals company.

“The pharmaceutical users are awakening and acknowledging that there is a better way for them,” she said. “And it’s really important for us to bridge that gap and try to help rehab a lot of those people who have become addicted (to pharmaceuticals) and turned into users.” 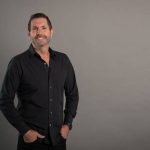 David Fowler, the executive director of Cannaval: “People loved the entertainment and the fact that we had married the wrestling aspect with the cannabis expo.

McKendree and her buddies provided free pre-rolls (pre-rolled joints) to the concertgoers, wrestling fans, and the wrestlers.

“I just laughed,” she continued, “It’s funny to see people wrestling with wigs and cute girls throwing up pre-rolls.”

The Arizona tag team wrestling champs sparked up a pre-rolled joint; then, they checked out one of the designated cannabis consumption lounges to view a couple of the music acts.

“Being an enhanced super-duper athlete, you have to make sure you have something to go off of after long, strenuous matches and bouts,” Mattic said in a softer toned voice. “One thing that helps out is something like this weed, man. It’s just getting you in the right mind. So it’s kind of a trip I’m on.”

When asked if smoking weed affected the Arizona wrestling champions’ performance in the ring, the tag team champions’ eyes lit up.

“You do have to make sure you are continuously active,” Watson responded. “You can’t just sit there and smoke all day.” Mattic continued, “I’m a productive smoker, and smoking before going to the gym will get me more in the zone, keep me focused, and get me locked in but afterward, when I’m done, I can relax.”

David Fowler, the executive director of the Cannaval event, was stoked with the action-packed wrestling matches. “People loved the entertainment and the fact that we had married the wrestling aspect with the cannabis expo,” he said in a recent email. “After a successful event, we are looking to November 12 for Cannaval 2.0. It’ll be bigger and better.”