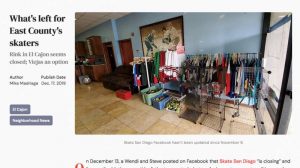 By Mike Madriaga
On December 13, a Wendi and Steve posted on Facebook that Skate San Diego “is closing” and “we are liquidating everything”; the two posted photos of a large stereo system, “thousands of” roller skate and rollerblade wheels, and fixtures. I called the skating rink, which is located at Denny Way west of the I-67 in El Cajon and left a message. As this story goes to print my call was never returned; their Facebook hasn’t been updated since November 9.

“I’ve been there,” said Geraldo Velazquez, “me and my girl went to check it out, and it has a bunch of holes on the floor. I don’t know what the floor is made of: it’s funky and it hasn’t even been there that long.”

On Yelp, most commenters said that the staff here was friendly. Others corroborated with Velazquez’s “holes” in the floor assessment; one posted a photo of what appeared to be a pegboard.

“Some of [us] ladies decided to go skating because we saw the Groupon and it was a good deal,” commented Tea, an Elite 2019 reviewer. “I would never pay full price for this place. Front desk was nice. But the skates are old. The rink is old and not even wood, very uneven. We had a good time.”

Velazquez, 50, has been roller skating since the 1970s, “when my big sister used to take me to Palisades in North Park, and in the 80s I used to hit up Aquarius in La Mesa, where Drew Ford was.

“Skate San Diego is closer to me than SkateWorld in Linda Vista — so I gave it a chance, but I wasn’t impressed because it’s too slow, and plus they don’t have a quad pro shop like at SkateWorld.” 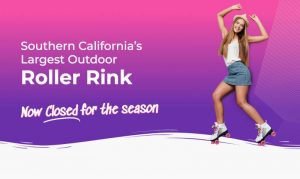 “That last time we spoke, you said they might close SkateWorld in Linda Vista,” I said to Velazquez; “the Linda Vista skating rink ain’t going nowhere,” he responded.

On April 8, City Council voted 6-3 to block the sale of SkateWorld to a developer — and “will restart bidding process,” reported NBC 7 San Diego.

When word was out that SkateWorld was closing, San Diego County roller skaters, or quad skaters (with four wheels in a rectangle layout), considered the El Cajon spot, “until they saw and felt the floor — it’s even hard to dance-skate on that, and these kids now doing ‘Jamskating’ ” — a fusion of dance-skating and breakdancing — “it’s probably even harder,” Velazquez said.

“So what are your options if the Linda Vista rink gets bought out?” I asked Velazquez.

“We still have the Boardwalk,” he responded, “but last time I was there [speed] skating, they were yelling at me to slow down.” 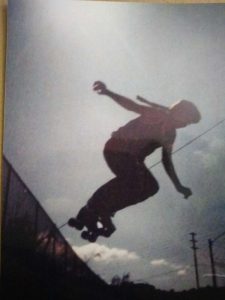 Velazquez: “Me and the homies used to vert in the ditch by my mom’s house on Imperial.”

Velazquez built a custom set of skates where wheels stick out of the sides.

“When I first made them, I put skateboard trucks,” he said, “like Gullwing trucks from my old skateboard, because it was wider, and I thought that it gripped better. The first ones I made, I used with Converse basketball shoes, and I used to skate Mission Beach. I was the only one that had the wheels sticking out that far, and only one that put skateboard trucks on a skate, I’ve never seen anyone else do that.”

“How fast you can you go on those?” I asked him; “You know those electric scooters — I can smoke ’em,” he responded.

“We can also go back to the ditch by my mom’s house on Imperial. Me and the homies used to vert there on roller skates before the trolley came in — Mike, I’ll send you a picture of me in the early 80s catching air there. Tony Hawk used to hit that spot with us.”

“On rollers skates too?” I asked; “Naw, on his skateboard.”

“So the boardwalk and the culvert by your mom’s pad.” I said, “is all you roller skaters have left if …..”

“There’s one more place,” Velazquez cut me off in mid-sentence. “Viejas has an outdoor skating rink where the ice skating rink is now, and for 6-7 months it’s a roller skate rink and I’ve skated it. It’s concrete and real smooth and it’s the fastest rink that I’ve been at, and the wheels just keep rollin’. They have a big projector screen and they play 80s music and videos. I was there during summer.” 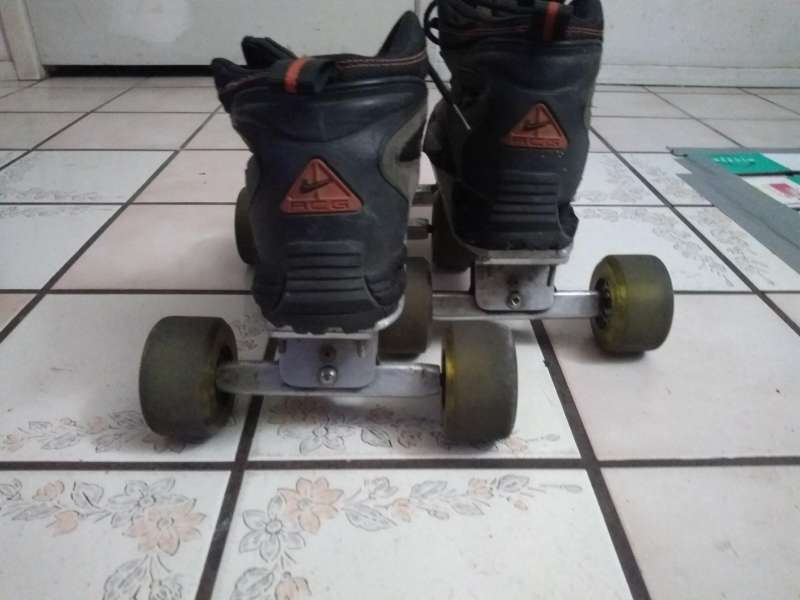 Velazquez’s wide trucks. “You know those electric scooters — I can smoke ’em.”