What to make of the January 1 Old Town Trolley murder 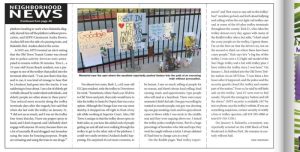 “On New Year’s morning, UFCW Local 135 union member Martin Andara was senselessly killed after being pushed into an oncoming train at the trolley station in Old Town San Diego,” reads the union’s January 7 online post. “Martin worked at Ralphs 207 in Pacific Beach and was a member of our union for six years.” That Friday, local union members rendezvoused with Andara’s family and friends for a vigil, only feet away from where Andara died from his injuries.

“Goodbye, our friend, until we meet again,” read one of the posters hung on a wrought iron fence with a photo depicting Andara and an inflatable snowman. Lit candles and flowers in vases sat on the pavement below.

On January 1 at about 6:15 am, Andara, 68, and the suspect, Ryan Michael Rukstelis, 26, disembarked from a southbound trolley that pulled into the Old Town Transit Center on Taylor Street (southeast of the 5 and 8 freeway interchange). Andara was walking along the platform heading to work when Rukstelis allegedly shoved Andara off the platform without provocation, said Lieutenant Andra Brown from the SDPD. Andara fell into the side of a passing train, and Rukstelis fled. Andara died at the scene.

At 8:05 am, MTS tweeted an alert stating the Old Town Transit Center was closed due to police activity …. Services anticipated to resume in 30 minutes.”

Tina L., a 31-year-old Ocean Beach dweller, was a passenger in one of the trolleys that pulled into the terminal afterward. “I was just there that day, and to me, it was kind of strange to hear that he [Andara] had gone into the tracks; it was saddening to hear about. I see a lot of elderly get verbally abused by malevolent individuals, and elderly people are often alone in these parts.”

Tina noticed more security along the trolley terminals days after the tragedy but said when she last rode the trolley on January 21, “I have not seen as much, and I was on the trolley four times that day. I have my pepper spray in hand, and I don’t respond, and I definitely don’t engage with anyone.”

For almost two years, Barb. L., a 62-year-old El Cajon resident, rode the trolley to downtown for work. “Sometimes, when I had a car, I’d drive to Old Town and park, then only would have to take the trolley to Santa Fe Depot; that was a nice option. Although the orange line was way more sketchy, it dropped me off right in front of my job while working at Superior Court. Also, Old Town is unique in that the trolley doors open on both sides, so you have the added rush of people getting on and off and even walking through to get to the other side of the platform.”

“What was your reaction when you heard about [Andara’s death]?” I asked Barb on January 25.

“That I could very easily envision that happening. I’m surprised it’s not more common, to be honest. I saw so much yelling at people for no reason, and there’s always loud yelling, loud cursing, trash, and opportunistic type people who will steal in a heartbeat.”

On the Reddit pages ‘Bad trolley experiences?’ and ‘Best ways to stay safe in the trolley/bus?’ — members speak about the bullying and yelling within the red-colored and light-rail trolley cars, and some of the 60-plus trolley terminals throughout the county.

Rick D., who rides the trolley almost every day, agrees with many of the Reddit trolley riders, but “I don’t mind the crazy people on the trolley, I ignore them. I’m on the first car that the driver’s on, not on the second or third car where there have been crazy people.” Rick says he’s “a big fan of the trolley. I even own a U2 light rail model of the San Diego trolley and a hat with trolley pins. I have ridden the trolley since I was born.”

On January 1, Rick trekked into the Old Town Trolley station via an MTS bus. “I was there a few hours after it happened, and the police and the security guards closed the trolley and coaster part of the station.”

“Do you feel safe on the trolley?” I asked the interviewees for this article, who requested to leave their last names out of the article.

“Yes,” Rick responded, “and if I were ever to feel unsafe, I’d push the emergency button and tell the driver.”

Tina keyed in. “It’s scary because there are a lot of mentally ill and drugged-out homeless using the train for housing purposes. People are urinating and using the train to use drugs.” 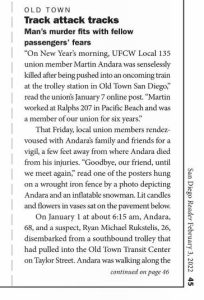 Barb continued: “There were many moments I didn’t feel safe. One guy was yelling he wanted to murder people, one guy was shooting up, one guy smoking crack, and two guys almost came to blows while I was stuck in the middle seat, and they were arguing above me. I texted the trolley police multiple times. But it’s a huge percentage of homeless who ride and hope they won’t be caught without a ticket. I always debated if I had time to change cars at a stop.”

On January 4, Rukstelis, a transient, was reportedly arrested in the 2200 block of Park Boulevard in Balboa Park. He remains in custody without bail.