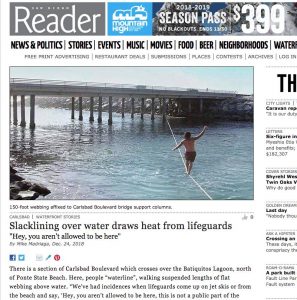 There is a section of Carlsbad Boulevard which crosses over the Batiquitos Lagoon, north of Ponte State Beach. Here, people “waterline”, walking suspended lengths of flat webbing above water. “We’ve had incidences when lifeguards come up on jet skis or from the beach and say, ‘Hey, you aren’t allowed to be here, this is not a public part of the beach,’” comments Nick Fitzpatrick. “Then a couple of months ago we’ve had other lifeguards come back to us and say, ‘Ignore those lifeguards. There isn’t a rule with what you guys are doing.’”

Fitzpatrick then direct messaged me a photo of his buddy Alejandro Sanchez walking a 150 ft. (approximate) webbing that was affixed to one of the Carlsbad Boulevard bridge support columns underneath and another structure to the east.

Because there are no clear rules as to where Fitzpatrick and his buddies can waterline, slackline (above ground) and highline (between cliffs), sometimes they have to find remote areas so they are harder to spot. “We are avoiding [the Carlsbad Boulevard bridge] until we can go back there with confidence and we are not upsetting anyone,” Fitzpatrick continues, “After that experience we found ways of slacklining over water in less public venues throughout San Diego.”

Garrett from Escondido is used to law enforcement “sweating” him for slacklining at Kit Carson Park and waterlining by the coast.

“All the codes cited to me were very much so up to interpretation,” he said, “even though the sport’s been allowed in Yosemite National Park since the 1970s.”

Garrett is a 29-year-old plumber by trade that’s been walking-the-line and then some — for over a year. He sent me a video (in a non-disclosed coastal area of North County) of someone tricklining above water. Tricklining is a variation of the sport where they do flips and poses on the webbing, and remain on the webbing as long as possible.

“When you’re over water you have to learn to scoot out and stand without falling,” he said. “If you do fall you’re best bet is to grab the line and hopefully get back up. The water also offers security enough to try tricks you normally wouldn’t. I tried my first front flips over the water and gladly so because my first attempt put me face first into the water while tucked in a ball which would have yielded a nasty concussion on the ground. A lot of my favorite tricks on the line are yoga poses, standing on my tip toes and juggling.”

Both Fitzpatrick and Garrett added that at times they have former lifeguards that waterline with them.

“It’s such a new sport that the laws have not been created. And what we are looking to do, through city council meetings, is to introduce the sport to the public the right way and create a way for legislation to exist— but in a way to allow slacklining to exist.”

Published in the San Diego Reader on December 27, 2018 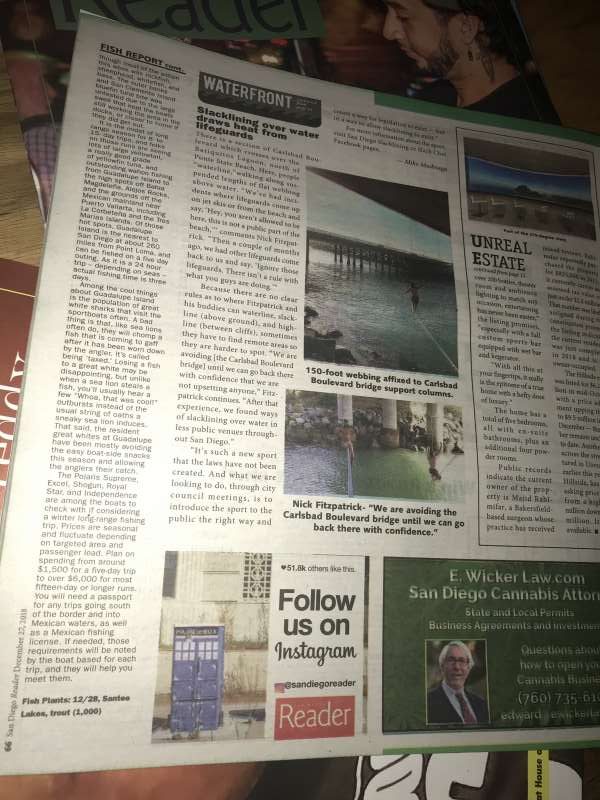 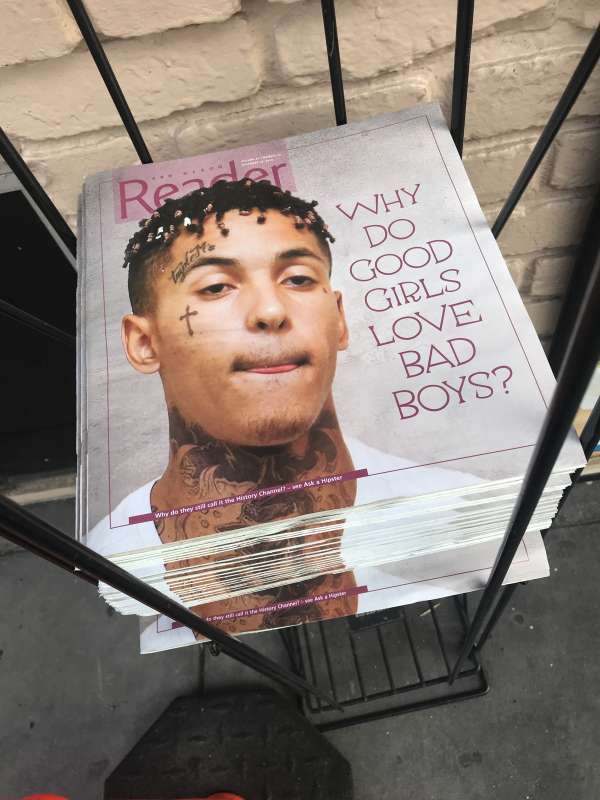