“Last week we posted up right there at the Tapioca Express by the golf course [in Bonita], and there were a couple [of] five-o scopin’ out my whip with flashlights,” explains Warren Manongdo as he wrenches on his 1995 Honda Del Sol. “But after I showed them the Blue Tag it was all good even after they mentioned that they could crush a car for tampering with the VIN [vehicle identification number].”

Manongdo is calm when explaining that he has been pulled over more than ten times in the past year by both the CHP and SDPD. He’s been cited for his car being too low; too loud (the muffler and/or stereo system); front window obstructions (decals); Japanese front license plate (which reads “OMG”); and the latest of his law-breakin’: taking rear-view-mirror selfies with the police car in the background (while the vehicle was still moving).

Then there’s the right-hand-drive conversion that he did to his vehicle in order to give it that true Japanese Domestic Market (JDM) vibe.
Manongdo, a pharmaceutical tech, who treks from Paradise Hills to Torrey Pines every day, claims, “[T]hey can never get me for driving to and from work on the right-hand-side of the vehicle, because I went about this the right way….

“I had to import a whole front-end JDM clip and convert it onto my USDM [United States domestic market] frame [via welding], cut new holes through my firewall to run the wires and cables…. The wiring was hella tricky, though, because it had to be flipped.”

The wires in Manongdo’s Honda were all taped and grommeted to give it the stock OEM (original equipment manufacturer) look…which explains the wall of trophies lined up atop his red tool chest.

“I got the best Honda at the last Autofest in Anaheim [in May 2014],” he says, pointing toward a four-foot-tall trophy, “and you know how hard it is to win in the Honda class!” (The Honda/Acura Class at car shows has the largest playing field because of the variety of models spans almost four decades.)

Manongdo invested about $10,000 in this purple 250-horsepower daily-driver; and then he received $10,000 in sponsorship swag; hence, the montage of company decals plastered in the middle of his windshield. 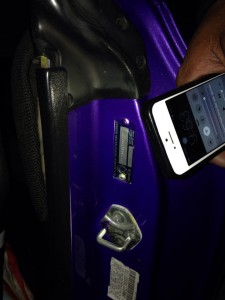 “….. even my glass and lights were checked by the DMV and CHP,” says Manongdo, wiping down his glass with a home-brewed concoction. “Everything has to be DOT [Department of Transportation] coded, and I even had to bring my USDM firewall and dashboard [with the old VIN plaques] to the CHP for them to keep, and they requested to see the receipt for the purchase of the JDM motor in Japan, before they handed me the ‘Blue Tag.’”

A Blue Tag is given out if the VIN number is missing or has been changed. A CHP officer is required to make sure all of the identification numbers on the vehicle match with records.

“It’s one thing to import a [complete vehicle] into America and try to legalize it, but try to legally source parts and a motor in Japan and install them same parts on your American car, and have the DMV, CHP, and SDPD all approve it where you can legally drive it on our [American] streets. And that’s not the hardest part — look at these!”

Manongdo pulls out copies of his fix-it tickets and violations, the cost of which surpasses the $1724 Kelley Blue Book value of his car. 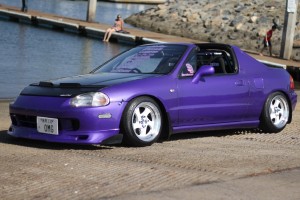