VR will not replace skating; Tony Hawk busts out his 360-degree loop in Vista Sunday 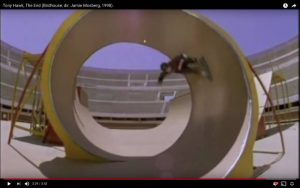 Tony Hawk: “I always got hurt somehow.”
From YouTube of 1998 demo

On August 26, former skateboard champion Tony Hawk busted out his 360-degree loop to give a few young skateboarders a chance to demo it by his headquarters in Vista.

The loop resembles that of a roller coaster, but the difference is that the skateboarders fall straight down if they cannot make it around the 16-foot-tall inverted track. The drop-in is a 14-foot drop that provides the skaters with about 13 mph of momentum, which is the “best speed” to get around this particular loop.

“I always got hurt somehow along the way of learning it,” said 50-year-old Hawk.

The first time Hawk pulled off the 360-degree loop was in 1998, for a Birdhouse video (watch below) that was filmed at the bullring in Tijuana.

On Sunday, Lizzie Armanto from Santa Monica successfully rode her Birdhouse skateboard around the 360-degree loop; she was the first girl to pull it off and on her first attempt. 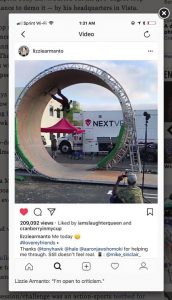 “I’m open to criticism and listening and watching how others [were] trying it,” she said to me.

Armanto pulled off her ride towards the tail-end of the session when the eight virtual reality cameras around the loop had stopped filming.

The skate session/challenge was an action-sports testbed for NextVR, a virtual reality broadcast platform based out of Newport Beach.

In order for the fans to watch the 3D stereoscopic broadcast, they have to download the free NextVR app from the stores associated with Oculus Go, PlayStation VR, HTC VIVE Pro, HTC VIVE, Windows Mixed Reality, Gear VR, and Google Daydream. A virtual reality headset is also required.

“VR will bring the worldwide audience closer to the real experience of being there in Vista,” Rebekka Strand said to me. “They will get to know the athletes better and see how much they go through to achieve their goals.” 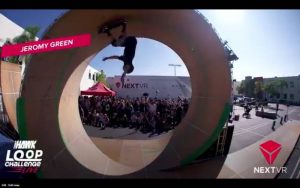 Strand, a 26-year-old skateboarder, was here filming her fiance Jeromy Green from Jamul. “I told him not to hurt himself and to do what felt right, no matter the pressure of the moment.”

Green dropped in, made it around the loop, and exited — without falling; the crowd “went bananas” and confetti was dispersed.

“I was terrified and ecstatic at the same time,” Strand said. 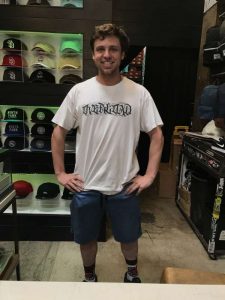 Collin: “The fright factor is unreal.”

Collin, 23, has been skating for 12 years and works at Overload in North Park; he and his buddies saw the virtual reality footage. “VR will not replace skating, but it opens your eyes up more,” he said. “Regarding the loop, the fright factor is unreal. The hard part is rolling up to it and being upside down — it’s a huge mental thing and it’s a natural reaction for you to just want to jump off. I’ve seen pros going for it and completely like fall really bad.”

Freddy Palazuelos from Tijuana has been skating for 30 years. He remembers watching Hawk’s 20-year-old video that was filmed in his neighborhood. “[The production] was handled as a secret …. and doing the [360-degree loop] trick is super difficult because of the precise speed and balance that you must have.” 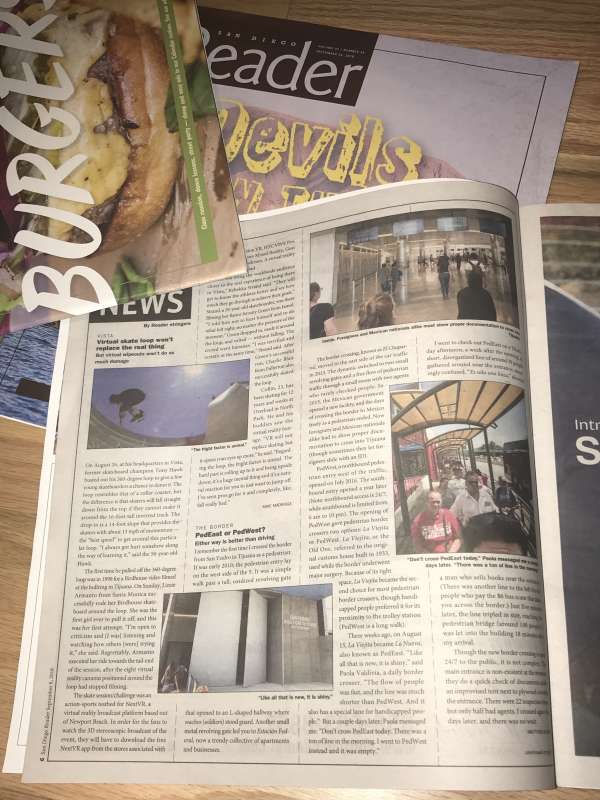 The article was originally featured in the San Diego Reader (September 6, 2018) print magazine.