Volvo tech gives middle finger to the rest of you 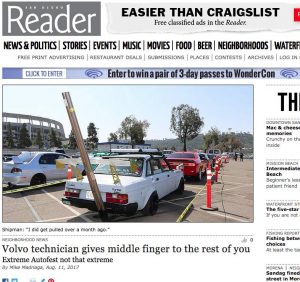 Original story featured in the print edition of the San Diego Reader (August 11, 2017)

“I would never be caught dead in that car,” said Michelle Van Rooyen.

On July 29, Shipman and Van Rooyen were both competing at the Extreme Autofest Lifestyle Festival in the Qualcomm Stadium parking lot.

While most cars that entered the show had kick-ass paint jobs and thousands of dollars in aftermarket accessories, Shipman’s “hoopty” (coined by someone passing by) was something entirely different.

“We build a lot of really janky shit,” said the 23-year-old Volvo technician, “I was made fun of a lot, and people ask ‘what the hell are you doing, this isn’t a Cressida — it’s a Volvo.’”

Van Rooyen is a 27-year-old personal trainer who was modeling for a friend at the show. “Those cars (Shipman’s Volvo) look old and strange,” she said, “that’s just embarrassing and draws attention to the car.” 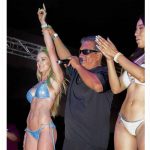 Michelle Van Rooyen (left): “I would never be caught dead in that car”
Photograph: Alan Hickey

Shipman kept his Swedish car in primer-gray color, dumped it on some staggered and stretched tires, and decked-out the exterior with some “Bosozoku” styling cues.

“It’s a Japanese stemmed [modification style] in the early 1980s,” he said. “It was sorta a middle finger to all of the police in the area (Japan). The oil cooler mounted [in plain view] on the front, the headlights which they angle inwards real hard to give it almost that angry look.”

Shipman also mounted a pair of Rolls Royce side mirrors, a gigantic wing (a la the first Fast and the Furious movie), a Sparco race seat, and “the ridiculous exhaust pipe sticking out so high,” Van Rooyen said.

“I did get pulled over a month ago,” Shipman said, “he gave me one [ticket] for no turn signals and he tried to call me on the exhaust there back when they were only six-feet [tall] and the section code he gave me stated that they could be no taller than 11 feet from the ground.” 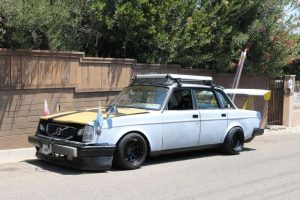 Shipman kept his Swedish car in primer-gray color, dumped it on some staggered and stretched tires, and decked-out the exterior with some “Bosozoku” styling cues.

So when I went in [court] to go fight that, they kinda dismissed that immediately.”

Shipman then mounted some eight-feet-tall exhaust pipes for the Krispy Kreme car meets that were on the news, but he broke them rolling through a low ceiling parking garage. He then put them in his backseat and had them re-welded for the Autofest show on Saturday.

Van Rooyen likes “slimline sexy sports cars” like Ferraris and Porsches, but her favorite of the 800-or-so vehicles at the show; was the 1960s Impala at the K&S Auto booth. She entered the bikini contest later that night and took home the first prize honors, and “it was a nice surprise to win $500 and I got to keep the beautiful ‘Hey Baby’ swimsuit that I competed in.”

Shipman didn’t win with his Volvo and claimed that “the judging was heavily biased” against his “$1200 money pit.”

When Van Rooyen was asked if she would ever date a guy like Shipman in his Volvo, she said “if the guy was really great, I would still date him.”

Shipman didn’t watch the bikini contest because he said that it takes the attention away from his and others’ cars.

The now 18-year-old car show “had over 8000 spectators,” according to one of the security guards and Imagine Media Group staff members that monitored the headcount. 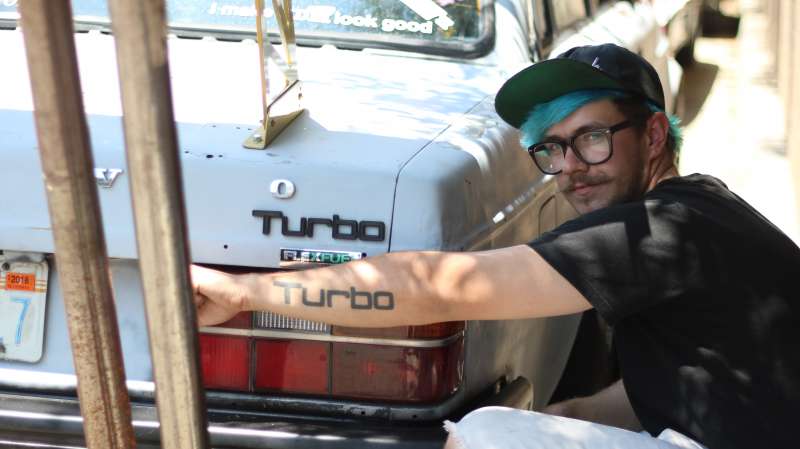 Mason Shipman: “We build a lot of really janky shit.”