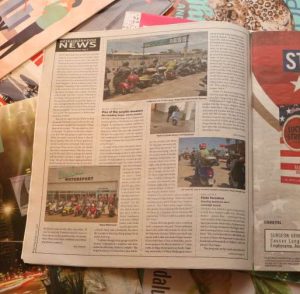 The original story was published in the print edition of the San Diego Reader on July 1, 2021.

On June 2, the San Diego Police Department Facebooked a photo of a stolen red moped. “A community member notified us of a man parking a moped and then running away, which [the man who reported it] thought was suspicious,” SDPD captioned the photo in part. “After tracking down the registered owner, we were happy to return the moped she worked so hard to get.”

A couple of days before the police department’s post, Andrew V., a North Park apartment complex manager, posted a video online of a thief stealing his tenant’s baby blue-colored Vespa scooter. “It was parked in a locked garage and was stolen last night.”

Andrew added on the post that he’d managed the complex — located on Lincoln Avenue, less than a mile northwest of the University Avenue/I-805 exit — for about 24 years. “And we never had any thefts until one month ago when it all started …. this is the fourth time our place has been hit in the past four weeks!”

In the 54-second video, the thief covers his face with a black bandanna and wears a black jacket with white accents by the shoulder hemlines, gray pants, a bluish-colored shirt, and a backpack. He enters the complex’s shared parking garage via its metal doorway. 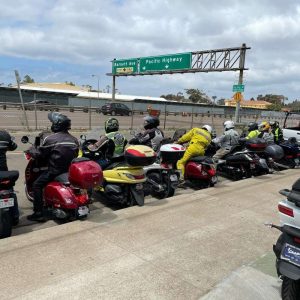 “I always thought that garage would be secure,” commented a neighbor who lives across the alley from Andrew’s complex. “But to get in over [a] 12-foot fence, how did he get the scooter out? Does the big gate automatically open from the inside?”

A University Heights dweller asked Andrew if he had more camera angles of the Vespa jacking. “Mine was stolen and later recovered in Chula Vista.” Andrew replied: “Yes, I have many angles of him. The police just picked up the flash drive.”

On June 18, I reached out to Andrew, and he responded, “[There’s] still no update about the Vespa.” 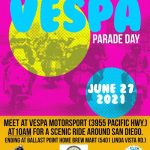 On June 27, over a hundred vespisti and other moped riders will rendezvous at Cohn’s shop to celebrate Vespa Parade Day.

“Vespa theft has gotten more common lately,” Alex Cohn said to me on June 21, “[compared to] the past. There’s not much you can do with it after you steal a Vespa because if you don’t have a key to that bike, you’re never going to be able to hotwire it.”

Cohn works at Vespa Motorsports on Pacific Highway, west of the I-5/West Washington Street exit and north of the San Diego International Airport.

“Vespas have steering locks, and around 2001, Piaggo, the Italian [based scooter manufacturer], added coded keys that have a microchip inside of it.”

Why the uptick in Vespa thefts?

“Could be the economic conditions, it could be [influenced] by all the rideshare bikes and scooters [scenarios] where people would wheel those away. I think it’s a carry-over on that, and I don’t know if they realize it’s a rideshare thing or not. They wheel it away and try to tamper with it.”

“What are other protective measures to safeguard your scooters?” I asked. “Vintage scooters don’t have that special key.”

“For the older ones, we have cable and lock systems and grip locks that go around the handlebars and lock the brake. We have alarm systems and GPS tracking devices.” 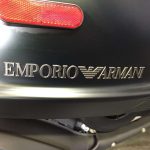 “I have a special edition 946, the Emporio Armani edition.”

On June 27, over a hundred vespisti and other moped riders will rendezvous at Cohn’s shop to celebrate Vespa Parade Day. Cohn added that the moped riders could network with one another and speak with him, other shop reps, or Robot, the shop’s Vespa mechanic/tech and event co-organizer.

“We’re going to meet here at Vespa Motorsport around 9:30 am,” Robot said in a YouTube video. “I’m looking to do a 2-2.5 hour ride …. and Ballast Point’s [Home] Brew Mart is the final destination.”