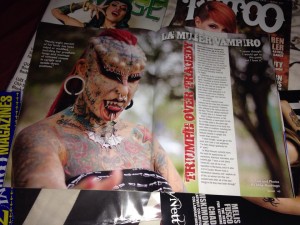 Maria Jose Cristerna received her first tattoo at the age of 14 years old which was a rendition dedicated to her favorite Metal band, Battery. Cristerna’s transformation as one of the world’s largest tattoo and body-modification collectors didn’t really take effect until she was 19, but even then her collection was kept subtle being a college student taught by nuns and ultimately receiving her degree.

“I graduated at the University, and I got my law degree in Penal (System) Rights. I practiced at Puente Grande Prison in Jalisco …. but then I found out that the laws were not working the way they are supposed to, and that’s where I lost dedication to it.”

Around the same time, Christerna started a family, and now has four beautiful children.

“… the most important ones (tattoos) are the ones that represent my children and parents.” Chisterna then referred to the various stars on her face, “the star tattoos which represent my mother who is in heaven now.”

Enter La Mujer Vampiro, or the Vampire Woman, a name given to her by another media outlet a few years ago. 98% of her body has been inked or modified, including her prosthetic fangs and montage of tattooed crosses, in upright and upside-down positions.

“I never thought I would get to this point, but I love it,” she explained as she autographed the fan’s fliers, “I’ve been doing it gradually for 27 years.”

On the weekend of February 21, 2015, La Mujer Vampiro made her debut at the 3er Tattoo Expo in Mexicali, BC, a border town 1.5 hours away from San Diego, CA, on the other side of El Centro.

“I have a rock band (Santos AC) and will be in an exposition in Monterrey, and I’m (also) a DJ in Europe. Women have a tremendous capacity, and I explore all of this so that women see that they can succeed even after all of the bad things in life that they have been through.”

After Christerna suffered years of abuse from her ex-husband, she harnessed the strength to remove herself and their four children from the torment.

“I have a crown on my head that no one notices … it’s a crown that represents triumph because I lived with a violent and abusive family, I dedicate myself to fight for women’s rights … and so I’ve crowned myself through living through horrible and extreme things in my life.”

On an episode of Tabu Latin America, on the National Geographic Channel, Christerna is depicted with her four children and a doggie, cooking breakfast and then bringing them to school. 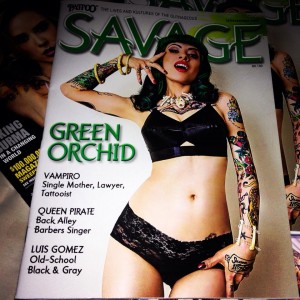 Tattoo Savage Magazine is sold on newsstands worldwide and can be viewed via their website, www.paisanopub.com.

“My kids are super use to it, I think to them its common to see someone’s tattoos, makeup, and art. I educated their little heads to be open minded. They’ve gone through a lot of good things and bad things with me, like the separation (with her ex-husband).”

La Mujer Vampiro is a progressive artist who transformed society’s status quo of religion and education and took it upon herself to utilize over 95 percent of her body, not only as a canvas but as an inspiration to many.

“I respect all religions and everyone, I would expect the same back,” Christerna also closed out by stating,
… having so many tattoos and modifications are simply expressions of liberty, it’s not a refuge of my past, it’s (also for) the love I have for tattoos and (body) modifications.” 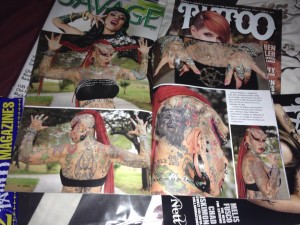 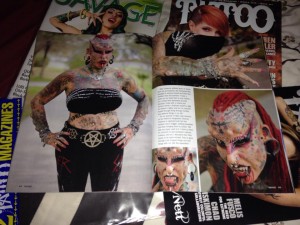 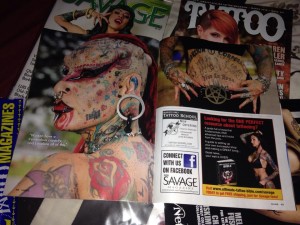 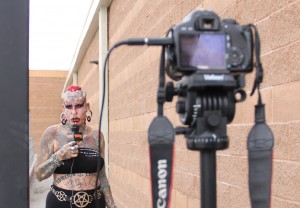 We had the honor to interview La Mujer Vampiro on video. 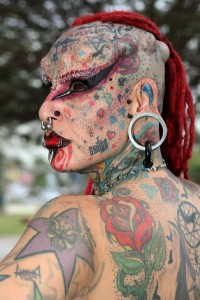 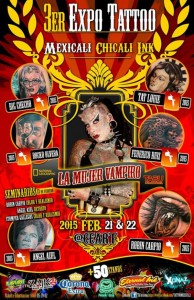 To the guys and gals at Chicali INK: thank you for having us and your hospitality. 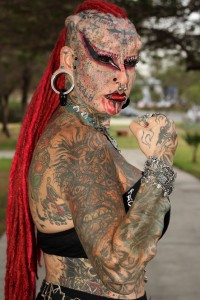 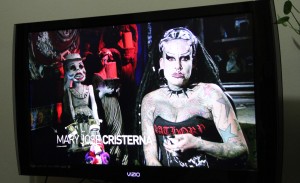 A screenshot of Maria Jose Cristerna on Tabu, a Spanish version of the Taboo television show on the Nat Geo channel.