Dan Mann of Coronado handcrafts high caliber surfboards— some are made from another man’s trash. “I have two ‘trash boards’ on order and I am working to try and refine the process.”

The last trash board he posted on his Instagram account in August sold for “a lot.” He explains, “it’s made from a broken Wavestorm board that I found in the trash cans on Coronado beach… I ran the Wavestorm through a series of cuts to make it fit the dimensions I wanted, and to remove these cheap wooden stringers they have in the middle of them.” 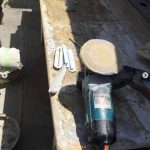 He grinded out the four fin boxes, and molded them into the trash board.

Mann dug up an old board he broke surfing in Imperial Beach, grinded out the four fin boxes, and molded them into the trash board. He added packing foam of “the same chemistry” as the Wavestorm to add length and thickness to the trash board. Then he reinforced it with carbon fiber and fiberglass scraps from previous projects. Towards the tail of the board, he affixed a leash cup that was made from a Dasani water bottle cap that he “pulled from the trash can at Whole Foods.” 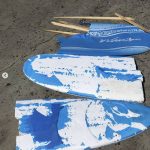 He added packing foam of “the same chemistry” as the Wavestorm.

“I like making things,” Mann said. “I’m cheap, and there is so much trash out there that, with a perspective shift, could be made into treasure… We won’t get out of the trash problem we see around the world by consuming something declared ‘eco’ by its maker. We have to change how we view material and incentivize each other to utilize materials in new ways with new processes.”

Published in the San Diego Reader on December 11, 2018