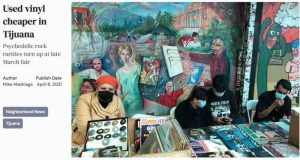 The original story was published in the print edition of the San Diego Reader on April 6, 2021.

On March 26-27, an estimated 20 San Diegans rendezvoused with about 3000 other record collectors and dealers at the Pasaje Rodríguez on Avenida Revolución in Tijuana for the Fifth Tijuana Vinyl Fair.

“[I found] an extremely rare ‘City of the Angels’ single by Los Walker de Tijuana,” said Lucio Soto. “Currently, I exclusively look for Tijuana oldies bands from the 60s and 70s.”

Soto’s been stockpiling records at his Escondido home and storage lockers for the past 35 years.

“I am what you call a severe hard-core vinyl junkie. I am about 50,000 records deep in my collection.”

“How much did you pay for that Los Walker de Tijuana seven-inch record?” I asked Soto.

“$325 USD …. although I’m not too comfortable carrying much cash in Mexico.”

Soto then direct-messaged me a photo of him holding a Feliz Navidad/Centro Musical De Tijuana, S.A. album that he purchased from Luis Enrique Acosta Jimenez for $300 USD.

“Our used vinyl prices on English [sung] rock and Mexican national music is more economical compared to the U.S. prices,” he said to me, “although, on the new vinyl reissues, we are five percent more expensive here in Tijuana.”

“About 20 record vendors sold at our show,” continued Pedro Serrano, the other co-founder of the vinyl fair, “they came from other regions and cities in Mexico. They brought rare records of Mexican psychedelic rock, which ranged from 3,000-4,000 thousand pesos ($147- $196 USD) apiece.”

Armando Nava, guitar player and keyboardist of Dug Dug’s, a 60’s-70’s psychedelic rock band, signed autographs at the record show. His group’s albums — which contain early Mexican rock songs inspired and created in Tijuana, and some sung in English — are fetching hundreds of dollars on U.S. eBay.

“We sell our records to the whole world via eBay and to our customers on the store page,” Serrano continued.

“Tijuana is considered the rock capital of Mexico. Playing at advanced levels, our groups played to mostly American audiences on Avenida Revolución back then. We had Dug Dug’s, El Ritual, Peace and Love, Live Army, El Pájaro Alberto and Javier Batiz.”

None of the record collectors or dealers I spoke with utilize Mercado Libre, a Latin-American version of eBay. On this buying and selling platform, I found Dug Dug’s circa 1974 Cambia Cambia album selling for 1,100 pesos ($54 USD), a bargain, considering nobody on the U.S. eBay platform is selling it.

“If I buy a bunch of records in Tijuana and bring them back to San Diego, how do I stash them in the car, so they don’t warp inside a hot interior or trunk while waiting in line in the summertime,” I asked the record collectors.

“My guess is to keep them upright,” suggested Soto.

“The best way to transport them is with special heat-insulating suitcases that are kept in the shade inside the vehicle,” Serrano said.

Serrano’s a second-generation record dealer who ships records to his clients within the U.S. via USPS’s media mail, which costs about $3 to send a single record and about $5 for a stack of five records.

“Do the U.S. Customs and Border Protection agents or Mexican customs officials trip out on your records?” I asked.

“We always cross vinyl, and taxes are not required since they are cultural materials.”

There are about ten record stores listed in Tijuana on a Google search. Acosta Jimenez said their next vinyl show is on June 26 and 27.