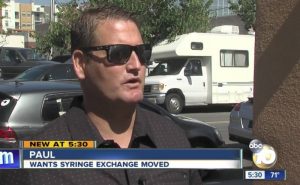 Like many other residents in the area, Paul Tibbets doesn’t want his kids (and himself) to witness the “negative” element that the RV brings to North Park.

Paul Tibbets and his neighbors want the Safe Point San Diego-Syringe Exchange Program recreational vehicle to move somewhere else. For the past 14 years, an RV has been parking across the street from the North Park Library almost every Friday between 10 a.m. and 1 p.m.

Tibbets owns two properties in the neighborhood and he takes his two children to the library, sometimes on Fridays at 10 a.m. for “Babies and Books,” which is the same time that the syringe-program RV opens shop. Like many other residents in the area, he doesn’t want his kids (and himself) to witness the “negative” element that the RV brings to North Park.

“I have reached out to the [RV’s main office] several times and they have been completely incommunicado,” Tibbets said.

The mobile syringe-and-needle-exchange program was partially created and currently run by the Family Health Centers of San Diego (FHCSD). The “1998 Ford” recreational vehicle is one of two units that has been parking at this location since its inception in 2002. The program’s mobile address is listed as 3795 31st Street, which is the same address as the library. The other mobile unit parks downtown at 720 15th Street on Thursday nights between 6 to 9 p.m.

According to the 2-1-1 San Diego website: “The program offers comprehensive services to help injection drug users reduce the risk of HIV and Hepatitis transmission [and] services include individual education, case management, referrals to drug treatment and detoxification, and one-for-one syringe exchange.”

On October 23, I contacted representatives from the Family Health Centers of San Diego. They have been running the syringe program since they were awarded a $367,000 contract with Alliance Healthcare Foundation for a then (2002) one-year pilot Clean Syringe Exchange Program that includes no use of city funds. A contract for program evaluation was awarded to the San Diego Association of Governments (SANDAG) and Johns Hopkins University School of Public Health — according to the City of San Diego website.

“We don’t endorse drug use,” said Fran Butler-Cohen, the CEO of Family Health Centers of San Diego. “Everyone was on the same page that this is not to harbor or protect drug users. It is a non-judgmental place where [the syringe users] can go, be safe, not contribute to the rise of HIV and hep C, and eventually while working with them on a weekly basis, have the opportunity to move them into detox or treatment.”

Tibbets and many of his neighbors agree that the RV is a good program overall, but they are not happy to see what happens after the clients pick up their new syringes and needles. “I saw an actual drug deal go down directly in front of the needle exchange and the camera crews that were filming the day of the interview,” Tibbets said, “right in front of the camera crews.”

On October 13, Tibbets interviewed with Channel 10 News regarding the syringe program and its proximity to the library. What he and many of his neighbors ultimately want is for the program to move away from the library and farther from residential areas. Some neighbors suggested the RV move to the former Qualcomm Stadium or Sports Arena parking lots, but not all were against the syringe exchange being close by.

“I walked by the needle exchange many times without knowing the detail of the program,” said Krista Nadolski. “I am not sure how a young child would have any idea that the program was associated with IV drugs, unless an adult told them [and] as someone who worked as a family therapist and volunteered at Polinsky Children’s Center, if a child asked me about the program, I would simply say that it was health-related.”

Nadolski purchased her place by the library more than two years ago. “In the discussion about the needle-exchange program, I believe folks are mixing up the [increasing] homeless population with the needle exchange,” she said.

Bob Lewis is the “director of special populations” for the Family Health Centers of San Diego. He said that their clients are “not homeless” and “for 2016, of the people that we served in the syringe exchange, 46 percent owned or rented where they were staying at [and] 26 percent were staying with a friend or family who owned or rented.”

Lewis sat on the program-facilitation committee that selected the two locations in the early 2000s. The committee chose the areas because of the the high number of narcotics arrests at the time.

“We meet on a quarterly basis,” Lewis said. The committee consists of Dr. Dunford, SANDAG – the evaluator for the program, public health experts from San Diego State University school of public health, University of California, San Diego researchers, the McAlister Institute treatment facility, and the San Diego Police Department. Each entity reports to their committee members and they each make recommendations on what changes to make and how to be more efficient, and the police department has an update on crime data and its changes at the mobile sites.

Cohen said that at their mobile locations, they “have never had a police report with an activity that had been potentially injurious to a community member or to our staff.”

One neighbor said that police presence during the exchange is low because “the police are [allegedly] advised not to frequent the area during the exchange hours because it might scare away the clients.” Another neighbor complained that even though they may witness a crime, the dealers and users have to be caught in the act to be arrested.

While Nadolski said she hasn’t witnessed anything illegal during the exchange, Tibbets said that he’s witnessed “people shooting up in their cars or the alleyways.”

Lindsey Peña, the 10News correspondent who made the report two weeks ago, said “San Diego Police [told] us in the last few months, they’ve arrested one person for a narcotics related offense in that area, but that wasn’t on Friday.”

The majority of the current North Parkians who are active on social media are in disagreement of the RV location, but Lewis said that back then, their input was gathered and reported differently. “We got together a group of [North Park residents and] they drove around North Park and identified different sites,” he said, “and this [place] is what they recommended, and then the planning committee approved it.”

And then in 2003-2004 Lewis worked with the social science research center at San Diego State “and they did a random digit dial of people that were living in the North Park zip code, and what they found is about 80 percent of the people that they talked to, either supported or had no opinion about syringe exchange.”

Cohen and Lewis agreed that they will not move the North Park RV’s parking location in the near future because it’s a process that has to be voted on by the committee and that the site at North Park is very well patronized.

“The fact that this unit has been responsible for removing more syringes than what we have given out is a testament to their good work,” Cohen said.

Lewis said that since the syringe exchange’s inception, they’ve taken 3.9 million syringes off the street and 3.5 million were given out. He also reported that they had 67,000 visits downtown and 57,000 in North Park.

“… and all this from a unit that quietly comes in for three hours, we do our work, we do our counseling with the participants, and we quietly leave.”