Surfers and others not scared away by Jan. 15 tsunami 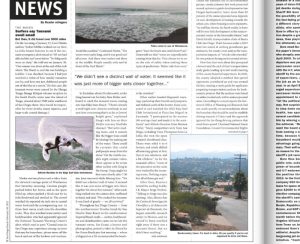 On the morning of January 15, Carol Niotta and her Yorkie, Pebbles, walked out on their La Jolla home’s balcony to check if the tsunami emergency alert at 7:03 am, affected the surf scene below. “No lifeguards were on duty,” she said to me on January 30. “One woman was down at the end of the rock where The Shack is, and she was holding a toddler. I was shocked because I had just watched a video of how sneaky tsunamis can be and how one just clobbered people out of the blue, at a resort.”

(Many San Diegans would find out three days after, that the tsunami waves — derived from the Hunga Tonga-Hunga Ha’apai volcano eruption in the South Pacific water by Tonga, about 5,300 miles southwest of the San Diego coastline — would be responsible for three deaths, many injuries, and large-scale coastal damage, in Tonga.)

Niotta sent me photos and a video from their elevated vantage point of Windansea that Saturday morning. Curious people parked below Niotta’s home, then as the spots filled up, others parked a block east by La Jolla Boulevard and strolled in. Most of the crowd watched the reported six-inch increase in coastal water level and its accompanying one-three-foot tsunami waves crash into the shoreline rocks. At the same time, some surfers and bodyboarders ignored the National Tsunami Warning Center’s alert. The alert read in part: “Coastal areas in San Diego may experience strong currents that may be hazardous …. please move off the beach and out of the harbors and marinas. Avoid the coastline.”

“The waves were really long, and not only was it breaking at [Simmons’ point[3], but it was good surf all across,” Niotta continued. “And there were surfers out there in the middle. People usually only surf in front of the Surf Shack.”

In Encinitas, about 18 miles north, Greg busted out his baby blue Hobie surfboard to surf the tsunami waves coming into San Elijo State Beach. “There’s already a swell right now: chest to overhead, so not sure how concerning that is as far as [wave] height goes,” explained Jess (Greg’s wife) on their ‘Drifter Journey’ YouTube channel. “But we’re reading more, and it sounds like the bigger issue could be [during] the sucking out of the water, there could be currents that could pull people away from the shore….”

On the vanlife couple’s eight-minute video, there appear to be seven other surfers with Greg in the lineup. Greg caught his first tsunami wave shortly after 7:50 am. Jenn narrated while filming: “We didn’t see a distinct wall of water. It seemed like it was just more of bigger sets closer together for about five minutes.” Afterward, Greg walked into the shot with his surfboard in hand and said, “We crushed the tsunami. It was kind of gnarly — we all survived.” 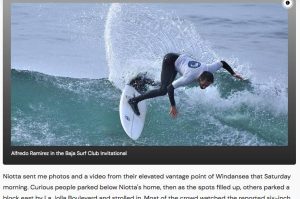 Throughout San Diego County — from the northernmost Trestles’ break by San Onofre State Beach to the southernmost Imperial Beach swells — surfers, bodyboarders and skimboarders came out to ride the tsunami waves. Jim Grant, a known surf photographer, posted a video he filmed by the Ocean Beach pier that morning — where a lifeguard on a PA recommended the beachgoers “leave the beach area until about 9 am.”

“Waves are unpredictable coming from that far,” Grant said to me. “They always try to err on the side of safety when making these types of predictions. Better safe than sorry is the mindset.”

Other surfers heeded lifeguards’ warnings, packed up their boards and passports, and trekked south of the border. Some competed in and watched the 2022 Baja Surf Club Invitational at Playa San Miguel in Ensenada. “I participated in the masters (40-and-up class) and made it to the semifinals,” Alfredo Ramirez from Mission Valley said to me. “Many competitors were from San Diego, including Tiare Thompson, from La Jolla; she won the open women’s shortboard class. There were solid 4-to-6 footers, and winds shifted all morning: glassy at first, then it was sideshore, and a bit offshore.” 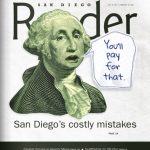 “Was there talk of the tsunami there?” I asked Ramirez.

“Yes, during the competition, at around 8 am on Saturday, some of the spectators on the rocks were washed by the incoming waves. Nothing major, but all of them got wet.”

“Talking to Serge was also calming and [assured] that everything was ok. Also, Mexico has Centro de Investigación Científica y de Educación Superior de Ensenada, the largest scientific research center in Mexico, and we would’ve been notified right away if there was a tsunami threat, but we didn’t hear anything.”