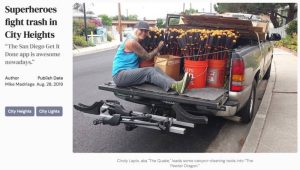 Cindy “The Quake” Lapio and “The Pewter Dragon”

Martial arts instructor Matt Armstrong and his “Trash-Vengers” crew picked up thousands of pounds of trash from their Azalea Park streets and canyons in the last couple of years — free of charge.

On June 5 at about noon, I rolled with Armstrong and his buddy Cindy Lapio — half of the Trash-Vengers that some refer to as a “vigilante” cleanup crew — to help pick up around their City Heights neighborhood located by Fairmount Avenue between University and Home avenues.

Armstrong found a green bag in the bushes. “It’s got toilet paper …. ohhh look at this: diabetic medicine,” he said. “I use this [for my diabetes].”

Armstrong and I examined the box of medicine which appeared new. “Are those needles,” I asked; “Yeah those are needles, and it’s got medicine in all of them [vials],” he responded. “This is expensive too.” As Matt disposed of the box, two kids from Clark Monroe Middle School walked by us on the sidewalk of 43rd Street.

We moved on to pick up trash at the trailhead of Manzanita Canyon which is also known as The Manzanita Gathering Place, and the adjoining dirt lot that extends to the backside of Aiwa Auto Repair Inc. at the intersection of Fairmount Avenue and Thorn Street. “Mike, be careful where you step,” Armstrong said, as my foot grazed a pile of human feces and toilet paper.

“So what I’m going to do is make a hole [with the shovel] and I can bury it,” Lapio said. 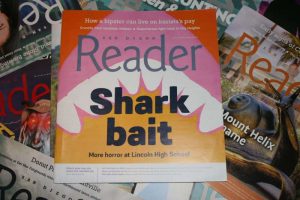 The original story was featured in the print edition of the San Diego Reader on August 19, 2019.

“We save the plastic containers in another bag,” Lapio said, “it’s the only way we get paid.”

Lapio then took one last look of the area to make sure nothing was missed, then nodded her head. “There used to be a lot of [illegal] activity around here,” she said.

In August of 2017, I wrote about then 51-year-old Armstrong and three others that cleaned up the same area. Back then there was a large homeless encampment with shopping carts covered with tarps, makeshift tents, and trash spread throughout the same lot. As the four were picking up trash, two men “ran up on us — and [one of the men] was very aggressive,” Armstrong said at the time. Fourth-degree black belt Armstrong remained calm; one of the aggressors said “I [will] stick you so fast your head will pop” and that’s when Armstrong pulled out his taser. 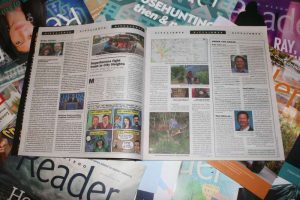 The reason why the four met up here to clean up was because they were “sick and tired” of seeing the amount of trash built up at this location and they weren’t getting the support from the city’s Get It Done program. In my 2017 Reader article titled “Homeless camp cleanup stymied by city,” Armstrong said he called and emailed Get it Done “like 50 times.” He renamed them “San Diego won’t get it done” in our interview.

Things changed for the better, though, thanks to the Trash-Vengers’ relentless communication efforts with the council members and their liaisons, the San Diego Police Department, the homeless outreach teams, the homeowners and renters, and the homeless population dwelling in their nearby canyons, streets and alleys.

In March of 2018, the police department created a subsidiary called Neighborhood Policing Division to help deal with the homeless crisis. The division sets aside time to meet with the Trash-Vengers at the monthly Mid-City Homeless Coalition meeting at the San Diego Police Department Mid-City Division at 4310 Landis Street, a mile north from where we were cleaning.

In July of 2018, the city upgraded and rebooted the Get It Done app/site with $2.3 million in enhancements. Residents can now upload photos of the problems and fill out better-streamlined forms about services requested or problems reported. Examples include HAZMAT-related issues, reporting cars parked longer than 72 hours, ordering of trash and recycle bins, reporting suspected enforcement violations, traffic lights, graffiti removal, and — the Trash-Vengers’ most requested — reporting active homeless encampments and illegal dumping.

“The San Diego Get It Done app is awesome nowadays,” Armstrong said in our 2019 follow-up interview. “I even get calls back on some of the homeless camps that I turn in, and the police give me a progress report.” 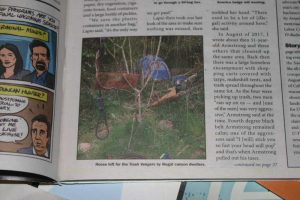 Recently, Armstrong cleaned up an encampment around a tree with a couch sitting high on its branches — by the Home Avenue entrance to the 805 freeway. He then alerted Get It Done about the filled trash bags he left for them and the couch.

The next day, “San Diego Get It Done emailed me back saying this report is closed,” Armstrong said on a social media update for his neighbors, “meaning, they cleaned it — lol — after the Trash-Vengers cleaned it.”

“Trash-Vengers” is a wordplay on words “trash” and “Avengers,” as in the superheroes.

When we met for the recent cleanup, Armstrong wore a Captain America button on his tactical vest, alongside his taser, pocket knife, pen and paper, smartphone, and homeless assistance pamphlets.

“Besides yourself, who is in the Trash-Vengers?” I asked him.

“We have Cindy Lapio, aka The Quake, and she’s captain of our vehicle: “The Pewter Dragon,” a full-size Chevy truck,” Armstrong explained. “Then there’s Burly the Bloodhound, aka Justin Boone, the owner of Burly and the Bean the coffee shop. And our leader, the Queen of Clean: Linda Pennington, she does more than any of us even though she is behind the scenes. Those are our main members on the roster, we have plenty of other people who help out on our weekly hikes.”

Pennington, 70, has been cleaning City Heights since 1981 via her Project CLEAN program. In 2017, I wrote about Pennington and the San Diego Canyonlands organization — of which she’s the City Heights community organizer. In a year’s time, she lead her teams to pull out over 19 metric tons of trash — which consisted of mattresses, furniture, plastic (bags, packaging, wrappers, and single-use food containers), old food and wood and non-native plants — from Manzanita Canyon and its surrounding areas.

“Now I go out with Matt and Cindy when I can,” Pennington said, “but unfortunately I find myself stuck at my computer pushing information out to the community through my email blasts, Nextdoor, and Facebook. I took it on myself to write up notes from the Mid-City Homeless Coalition meeting and keep the 90 people on the distribution list updated.”

This year Pennington applied for a county grant. With the money, she purchased tools and supplies for their cleanups and keeps them in her two-car garage. “The San Diego Canyonlands crew uses the tools every day, and my old 1987 Chevy S10 is available to loan out for hauling if needed,” she said. “…. and all this is a lot of accounting and paperwork.” 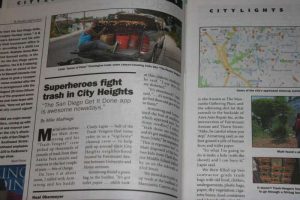 Before the Trash-Vengers and their assistants roll out on their cleanup excursions, they pick up trash bags, buckets, gloves, shovels, blowers, trash cans and tongs from Pennington’s garage; Pennington sterilizes the tools and receptacles in-between cleanups.

After our cleanup by Fairmount Avenue, Armstrong and Lapio took me to the Jamies Way entrance point to the canyon, by the corner of Jamies Way and Manzanita Drive.

Within a couple of minutes, we’d picked up a near-empty can of Mike’s Harder Watermelon juice, a desk lamp, a Hulk figurine, strewn clothes, an empty liquor bottle… “and look at this,” Armstrong said. “It’s another needle.”

Armstrong then placed the needle attached to a syringe into a plastic container shaped like a giant pencil. “This is how we stash them, that way it does not stab anybody,” he said.

There were about five syringes/needles in his container from today’s haul.

In early 2018, Armstrong and his cleanup crew found a booby trap made with fishing line and hypodermic needles hanging by a homeless encampment; it was an attempt to thwart their cleanup efforts; a few months later, someone left a noose for the Trash-Vengers with a note that read “Trespassers will hang by the heads.” In early 2019, “a hater” threw rocks at some of them as they picked up and bagged fire hazards within the canyon.

On this day in June 2019, no smoke was coming from Manzanita Canyon, which is bordered by the 805 freeway on the west; Azalea Community Park on Pepper Drive to the south. But in the past, Armstrong has hauled out burnt wood, remnants of a bbq grill, lighter fluid, and lighters from makeshift fire pits. He points to all the dry brush in the canyon. “We don’t want them having fires down here, because the houses are so close.”

Lapio then proceeded to her truck The Pewter Dragon, to retrieve her shovel and …. “Whoa, what is that, a machete?” I asked her, as she opened up her large retractable pruning saw.

“No, Matt has his machete,” Lapio responded, “they are tools of the trade …. this is for abatement so when we clear out a homeless camp, we’re allowed to take local plants like this cactus right here and we slice it off, and then the shovel helps me take it down there and put it in the flat places …. ”

“…. that they (the homeless) try to sleep in.” Armstrong continued.

Lapio proceeded down the embankment about 30 feet in from the trailhead and walked into vegetation to the left of the trail.

“The [park] ranger put in… posts in the ground that are buried really deep and see all the cactus right here: it’s sprouting up now… so they don’t sleep in here anymore.”

Since the team started regular cleanup efforts and group hikes — lead by Boone — residents along the canyon’s rim report seeing less “sketchy” activity within their streets and in the canyons. Boone does regular tours of Manzanita Canyon that take about “two hours depending on the number of hikers we get,” he said. “The distance for the hike loop is 4.5 miles and we break that up into shorter hikes most of the time. Manzanita Canyon is about 1.1 miles in length.”

Boone also leads the hikes into nearby Hollywood Canyon and Swan Canyon. The hikes start at his coffee shop on Columbine Street a block south of the canyon.

“Justin [Boone] is an information hub,” Pennington said, “plus he will close up shop and join Matt for a quick assist with cleanups. The hikes that he organizes are invaluable: just last week he did a one-man sweep of his hiking route and picked up some litter so it would be nice for the hikers.”