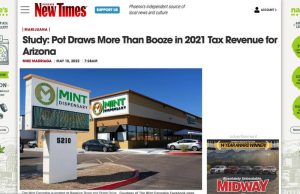 The original story was published in the print edition of the Phoenix New Times in May of 2022.

In 2021, adult-use cannabis excise taxes in Arizona reeled in $105 million, surpassing alcohol excise taxes of $92 million, according to an Institute of Taxation and Economic Policy (ITEP) report. ITEP, a nonpartisan and nonprofit tax policy organization, added that since recreational cannabis legalization in certain states, such as Arizona in November 2020, “revenue has tended to start low but grow quickly as legal businesses ramp up production and sales.”

Only Arizona adult-use cannabis consumers, or recreational users, must pay a 16 percent tax on every purchase of marijuana and related products. Then there’s also the state’s 5.6 percent sales tax and additional municipality taxes that vary per city and county, all bundled into a transaction privilege tax (TPT).

“Being in the town of Guadalupe, we pay an additional 4 percent on top of the 5.6 percent state tax,” said Raul Molina, co-founder and COO of The Mint Cannabis.

The Arizona Department of Revenue explains that TPT is “actually a tax on a vendor for the privilege of doing business in the state. Various business activities are subject to transaction privilege tax and must be licensed.” The TPT tax is then passed on to the recreational cannabis consumer who walks into Molina’s 12,000 square-foot dispensary.

Molina continued, “At our dispensary, you will pay about 26 percent total in taxes as an adult-use cannabis purchaser.”

But medical marijuana users are exempt from the 16 percent “sin tax” and only pay the TPT taxes, “which are state, county and municipality taxes at about 9 to 10 percent,” Molina added. 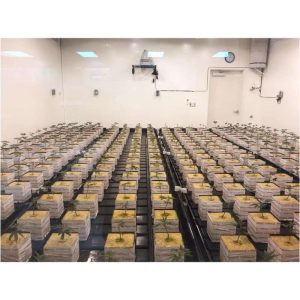 The mint vault Courtesy of The Mint Cannabis Facebook page

For an Arizona resident to get a medical marijuana card, the candidate must fill out a Medical Marijuana Program Qualifying Patient Checklist on the state’s Department of Health Services website. Then with the checklist, the candidate must provide an Arizona DHS medical marijuana certification form signed by a qualified physician stating the applicant has qualifying health conditions. There’s also a $150 patient registry fee, or $75 if the qualifying patient uses SNAP (Supplemental Nutrition Assistance Program).

Demitri Downing, a 10-year cannabis industry veteran, and founder of Arizona’s Cannabis Industry Trade Association, doesn’t exactly agree with the two-tier cannabis user tax system in this state. “I think cannabis is a medicine and because it’s a medicine, it should have a zero percent tax in my mind, because people need it,” he said.

Downing, a former prosecutor based in Phoenix, forewarns that if the taxes are too high, “people will start their own black market and gray market outside of the governments’ control, and they’ll need to be punished.” Which will result in additional taxpayers’ monies to monitor, enforce, and process.

“It shows what cannabis activists have been saying all along,” Molina concluded. “Tax is so everyone benefits — consumers or not.”