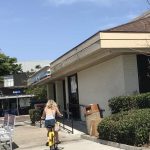 7-11 on University and Iowa

Share bikes and scooters have been stolen and vandalized since day one; lately throughout San Diego it’s gotten worse.

“Please, no pictures because they might attack me,” said Jane, “I’m scared and I just want to be anonymous.”

Jane, who requested her real name changed for the story, works at the 7-Eleven on University Avenue and Iowa Street.

“They steal food and then run out,” she said. “I don’t follow them because it’s dangerous and they usually use the yellow bikes (ofo) and sometimes they switch between the bikes and scooters.”

Melvin works at another 7-Eleven to the east of Jane’s store on University Avenue and 35th Street. “Last week, a guy with a Lime S scooter hit a small girl in front of our shop,” he said, “then she came in and her face was all bruised up. We put ice on it and when we walked outside, the guy was gone.”

Then the week prior, there were motorized scooters parked in front of their store. Melvin’s co-worker made me pay for a couple of hot dogs in advance before I headed to the condiments section. “I have to, unfortunately it’s getting bad here,” he said. 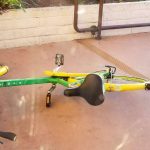 Last month I spoke to a Pacific Beach woman who was a hit-and-run victim of a Bird scooter rider. She owns a BMW that was struck by a Bird and her mirror broke off; she was stuck with an $1600 repair bill.

A couple of weeks ago, an Imperial Beach resident noticed a man riding a “stolen Lime Bike.” The “homeless man” was allegedly casing their homes, so he then posted photos of the alleged sitting on a share bike.

Steven is a 57-year-old cyclist that takes photos of suspicious share bike riders as well. He sees lots of them because he cycles from his home in La Mesa to his job at a commercial printing facility in Hillcrest.

“We see many [share bikes] that have been spray painted all over,” he said, “in white, black and even multicolored — I have pictures of a tan painted Mobike out in front of the Vons in La Mesa.”

He’s even seen one with a shopping cart attached to it like a sidecar.

“Two days ago, by Balboa Park, a homeless person was riding a stolen ofo bike.” Steven said, “and he was also stealing a Bird scooter.”

Steven then sent me a photo of another man on an ofo bike that was hauling a BBQ pit on wheels.

“They either take them unlocked by the last user,” he said, “or they break them [lock-mechanism housing] until the lock opens up.”

“Most thieves break it with a rock or a brick, but in doing so they can damage the rear tire and rim,” said Jay, a cyclist from Skyline. “The more sophisticated thieves use a special hollow point tool that’s shaped like a star. The tool or bit that attaches to a ratchet, removes the screws that hold together the plastic lock housing that you see on the rear wheel. But for us [cyclists] we don’t use any of those parts, so whoever is jacking them are not cyclists; they are homeless building Frankenstein bikes. 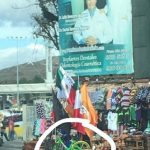 “Then some are being sold in Mexico too.”

On the user agreement sectionof the LimeBike website, it reads in part:

And ofo’s reads in part:

“If the ofo bicycle is not returned and checked in within a period of 24 consecutive hours, then the ofo bicycle is deemed lost or stolen and your account may be charged a lost bike fee of up to $300, and a police report may be filed with local authorities.”