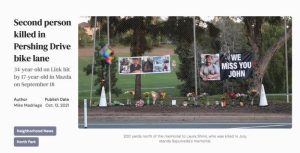 The original story was published in the print edition of the San Diego Reader on October 12, 2021.

On September 28, City of San Diego personnel installed reflective bollards along Pershing Drive by the Balboa Park Golf Course across the street from the Morley Field Golf Disc Course by North Park. “The dividers went up the week [and three days] after the scooter incident,” Mary Garton said to me on October 9. “Too bad it took two lives lost to get the city moving on this.”

Garton, 49, recalls seeing John Sepulveda, his sister, and brother-in-law riding scooters northbound on Pershing Drive. “I work as a flight attendant,” Garton continued, “and as I was driving home from the airport around 10:40-10:45 that night, I saw the three towards the beginning of the incline on Pershing.”

“I do recall that they weren’t doing anything that I would have considered illegal,” Damian Mays from North Park said to me on October 9. Although “I wouldn’t have the balls to ride up Pershing on a scooter, bicycle, or on foot during the day, let alone at night. It’s a fast road with some curves.” 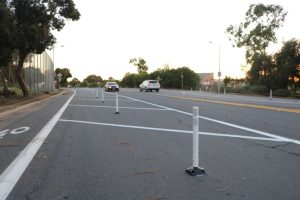 “What I do remember was not noticing them until I came upon them as it was so dark and the street lights are sparse on Pershing,” Garton noted. “When I noticed them, I thought to myself how dangerous what they were doing was and how relieved I was that I saw them. They seemed to be wearing dark clothes.”

“The scooters had lights,” recalled Mays. “My wife said to me, ‘People drive way too fast in this street to be out here at night on a scooter.’ Sadly, the timing indicates that one of the people we saw was likely killed just a few minutes after we saw them.”

Multiple news outlets said that Sepulveda, 34, was killed when a 17-year-old driver of a dark-grey-colored Mazda 3 entered the bike lane and struck him from behind as he rode a Link electric scooter northbound on Pershing Drive before 11 pm on September 18.

Underneath social media posts of the scooter accident, multiple North Park dwellers who ride their bicycles or drive their vehicles on Pershing regularly say that the roadway leading to and from the accident scene is dark at night and windy and bumpy in certain areas. One longtime local who was on the scene shortly after the collision mentioned the “road surface condition and experience[d] the same ‘pulling’ in places” despite his properly adjusted vehicle alignment.

On October 9 at about 6 p.m., I drove the same route on Pershing that Mays and Garton drove that night. As I ascended Pershing, I saw the Laura Shinn bike memorial by the Balboa Park Golf Course fence to my right side. (Shinn, 57, was riding her bike on July 20 when she was struck and killed by a driver allegedly under the influence of methamphetamine.) About 200 yards north of Shinn’s memorial was Sepulveda’s memorial.

Then about a quarter-mile north, at Bird Park, I noticed a handful of parked Bird and Lime scooters. Here, Pershing changes to Upas Street and goes eastbound and westbound, crossing into 30th Street, where I saw about 30 scooters on the sidewalks, including Birds, Spins, Limes — and Link, the brand scooter Sepulveda was riding that Saturday night. The Link scooters that I saw all had rear taillights on the bottom side and neon yellow-green accents.

After snapping the photos for this article, I took off to cover another story, then at about 10 p.m., I returned and drove past the two memorials on Pershing Drive. I noticed how the bollards’ reflectors helped illuminate the area as my headlights reflected off of them; I saw only two streetlamps on opposite sides of Pershing in the vicinity.

“These new dividers (bollards) are already helping,” Garton said. “without dividers and proper lighting, it was pretty hard to distinguish a bike lane from the other driving lane.”

Per the City of San Diego regarding the bollards: “This will be a temporary measure until SANDAG – San Diego Association of Governments – begins construction on permanent protected bikeways on Pershing Drive, where two San Diegans have recently lost their lives after being struck by cars.

“The temporary bikeways will be fully installed by early October. Construction on permanent bikeways by SANDAG is expected to begin in early 2022.” 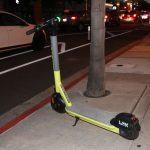 On October 2, Lime hosted a First Ride Academy safety training course in Clairemont, “after launching 500 top-of-the-line Gen4 shared electric scooters in San Diego this week with plans to scale up to 2000 soon.”