The original story ran in the print edition of the San Diego Reader on February 27, 2019.

On February 12, Leslie Monroy went to the north side of Crystal Pier in Pacific Beach with a stick and a rake — to create art.

“The closest name that I can come up with is a ‘sand mandala’, but it’s not really a mandala,” she said. “I’m not sure what it is called, yet.”

Monroy, an artist from Spring Valley, was referring to the 150-foot art piece that she carved into the beach.

“I did this design for myself [because] my birthday is on February 14. The white triangle that my model Jamie Shadowlight is inside, represents Aquarius. I used the white to show a clean slate as I enter my 33rd year.”

Monroy usually creates black and white pen-and-ink art and line drawings that are mounted on easels or displayed in galleries. She’s recently added the massive sand drawings to her portfolio, which is created on the beach when the tide drops, but when the tide rises back up, her “masterpieces” wash out to sea.

“I’m trying to do them once a month,” she said, “and I always do them here, north of the pier.” 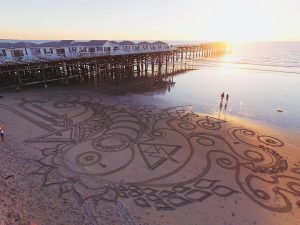 “Regular dry sand is soft and fluffy and you wouldn’t be able to see the details.”

Monroy used to surf PB until she sustained a gnarly knee injury two years ago, then in March of last year, she re-diverted that beach vibe to create her inaugural gigantic sand drawing. Her birthday piece on Tuesday was her seventh one.

In December, she created an Aries-and-Mars-inspired piece. “Aries is a ram,” she explained. “The triangle represents his head with two red eyes and the horns coming off of it; the symbol for Mars is the arrow.” She used about “370 apples” in the piece which was then washed and donated to a downtown homeless shelter.

One admirer saw drone photos of Monroy’s pieces and commented: “Dope AF (as f*ck)”; another said: “These resemble those UFO circles in the fields.”

“I used to draw lots of crop circles,” Monroy explained, “so ‘yes’ they do have an influence. I don’t really have a set plan when I do this and I’m never really sure what it will look like.”

“I’m always down for people to watch,” she said, “but probably not the first hours that I’m there, so I can get most of it done and get a good base down before people start talking to me. I really don’t want to be rude, but I have to fight the tide and only have a certain amount of time (2.5-3 hours).” 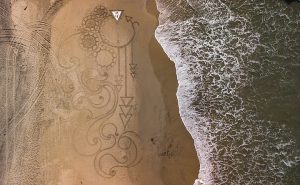 “I’m always down for people to watch, but probably not the first hours that I’m there.”

Monroy can only do this type of art when the tides out with fresh and wet sand. “Regular dry sand is soft and fluffy and you wouldn’t be able to see the details,” she said. “Mother nature rules on her canvas and I gotta do what she likes.”