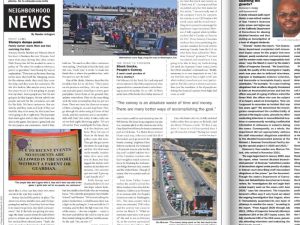 The original story was published in the print edition of the San Diego Reader in March of 2022.

By Mike Madriaga
Lisa H. from Valley Center wishes she could’ve joined her fellow semi-truckers when they left for Altadena, California, on February 23, to caravan with The People’s Convoy en route to Washington DC. “What an awesome experience to be a part of,” she said to me on February 25 as the convoy approached Albuquerque, New Mexico. “I am a company driver, so I cannot take this truck and convoy, as I don’t own it.”

Someone who goes by the BigRigShots’ handle on Facebook is currently driving a rig deep in convoy. He posted to his 200,000 followers: “BigRigShots is just a good ole trucking picture blog, and while I’m on the convoy with my rig – I don’t have answers. Usually, I don’t even know where we [are] stopping for the night till later afternoon. Life is fast on the convoy, and people are way interesting; great company we have here!” On February 25, BigRigShots pulled over on the side of I-40 in New Mexico, then filmed and posted a video depicting over 100 18-wheelers, ‘bobtails,’ which are semi-trucks san trailer in tow, RVs, and support ‘4-wheeler’ trucks and cars driving by. Additional 18-wheelers could be seen on the horizon towards the end of the four-minute clip. The video was shared over 6,500 times.

I reached out to BigRigShots for a quote, and he responded: “You can use [our] pictures with credit; no time to have a story [ready in response].”

Lisa requested that we only publish her first name in this article. “I am not really sure if the company I work for supports the convoy, as our CEO seems a bit Covid crazy and has tried everything in his power to encourage his employees to get vaccinated. However, I fully support what my fellow truckers did in Canada and here in the U.S.”

Since January, Canadian truckers have been protesting the vaccine mandate for truck drivers entering Canada from the U.S. They were called the “Freedom Convoy” protests, which started in Ottawa, the capital of Canada, then moved nearby the U.S.-Canada borders blocking traffic on both sides, further disrupting the already compromised supply chains.

“I am not vaccinated and wasn’t sure I was going to be able to keep my truck driving job until the Supreme Court struck down the OSHA mandate,” continued Lisa. “Bodily autonomy is so very important to me. I do not feel that anyone has a right to tell you what medical procedures you must participate in. This convoy is about much more than just the mandates. A lot of people are feeling the financial squeeze from high fuel costs, as well.”

According to the U.S. Energy Information Administration government website, diesel fuel in California increased from $3.635 per gallon about this time last year to $5.051 per gallon a day before the convoy left California.

On February 25, Chris Roberts at the Truck Net truck stop and service station, in Otay Mesa by the 905, said it’ll cost “about $2,326.81 in diesel fuel, not including maintenance costs” to drive a semi-truck from San Diego to Washington DC. The cross-country trek is about an estimated 2,700-miles, and the convoy is slated to arrive on March 5.

Roberts noted he didn’t hear of any truckers at his truck stop joining the convoy. 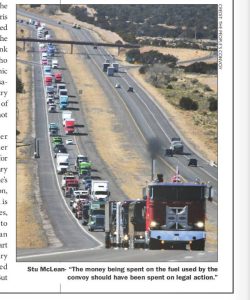 Stu McClean, from Valley Center, didn’t go, either. McClean has been driving a semi-truck for nearly 36 years. “In my opinion, the convoy is an absolute waste of time and money. There are many better ways of accomplishing the goal they have in mind. The only way these mandates will be done away with is with legal action through the system. To me, these truckers could have done more by just parking and slowing the market.”

When McClean and I spoke on February 27, the caravan had just passed Oklahoma City. BigRigShots posted photos and videos taken from within the caravan. Before this article went to print, one of the last photos he posted was captioned: “7000 vehicles & 30 miles long / Recent Oklahoma Highway Patrol report!” Other photos depicted hundreds of spectators lined along the freeways and overpasses waving U.S flags and banners supporting the convoy.

Lisa, who hauls dry van (a fully enclosed trailer rather than an open-air flatbed), said she drives 70 hours a week. “Of that, I can drive 11 hours in a 14 hour period; then I get 10 hours for a break.” During her recent breaks, she’s been following the live feeds from the convoy. “Covid brought so many more issues to us than we already had with shippers and receivers. I am glad that it’s winding down a bit because the lack of the ability to use a restroom was pretty dehumanizing and unsanitary at best. I have found that I really like seeing naked faces again. It just makes you want to smile.”

McClean isn’t smiling. “The mandates are unnecessary at this point, and the money being spent on the fuel used by the convoy should have been spent on legal action to make a legal decision that can be upheld.”

On February 18, Truck Net experienced what appeared to be a caravan of semi-trucks blocking access to their Otay Mesa truck stop. The hours-long congestion was due to a computer glitch on the Mexican side of the Otay Mesa Port of Entry, the busiest commercial port in California. “La Media Road, in front of our truck stop, is the main road that all of the truckers use to go down to the border crossing,” Roberts explained.

“How much revenue did your truck stop lose that day?” I inquired; “about a 30 percent drop in sales,” he replied.

On an ABC 10 News aerial shot of the border that Friday, it depicts dozens of semi-trucks were back up into the 905 freeway.

McClean hasn’t taken his tractor-trailer down to Mexico in a while. “As our side of the customs and border control is ridiculous, so I just stopped messing with it.” And in regards to the aduanas (Mexican customs) computer snafu — “I’m not surprised this could happen, as we have become too reliant on tech.”