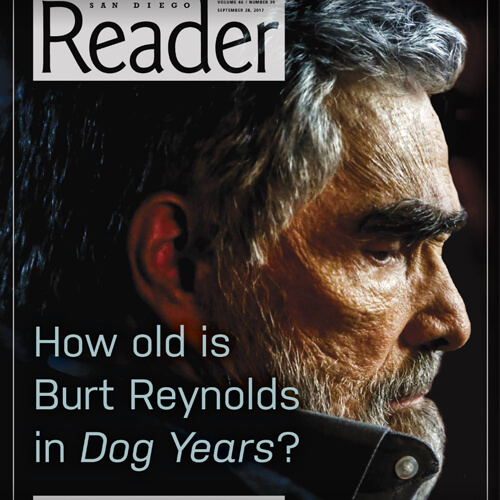 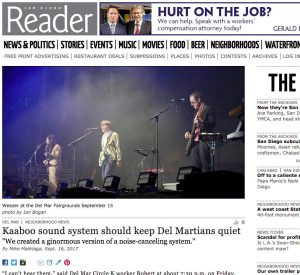 The opening night of the three-day Kaaboo music festival at the Del Mar Fairgrounds featured the Red Hot Chili Peppers, Weezer, Kesha, and DJ Diesel (Shaquille O’Neal), among others.

Robert, an employee at the store for five years, said, “I’ve never heard them from here [about a mile away]. Do you think they can turn it up louder?”

Many of the neighbors likely wouldn’t make that same request. Last year, the Union-Tribune reported that in 2015, “Del Mar officials said the city received dozens of voice mails and emails complaining about noise over the [Kaaboo] event. Organizers said they set up a complaint hotline, which received 91 calls.”

On the Reddit website, one neighbor complained that the music could clearly be heard from two miles away.

“I can hear the music when I stand outside [of the restaurant],” said Madeline, an employee at the Denny’s on the corner 2203 Via de la Valle, “but it’s not that loud or clear.” She works about half a mile away from the stages. During her interview on Friday night, DJ David Guetta was performing.

Click here for the full story. (Page 8 in the print edition)

“Last week I was following my son’s bus home [and] the bus stopped on Valle Vista Road near Vista Camino,” said Miranda Niederle of Lakeside. 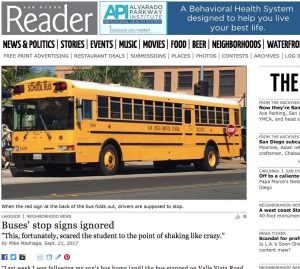 “[Then the driver] turned on the [bus’s stop] lights and three cars on the other side did not stop. I was waving my arms to signal them that they just did something wrong, and they just kept going.”

Niederle is a 32-year-old accountant from Lakeside. She is bothered by the number of drivers that do not stop when a school bus has flashing red lights and its semaphore stop-sign is popped out.

“That same day at the intersection of Posthill Road and Bridle Path Lane, a bus stopped in front of me again,” she said. “[Then] two cars proceeded past [me] without stopping on the opposite side of the road.”

Debbie is also a Lakeside resident and has been a school-bus driver for 22 years. “I’ve seen it all,” she said. “Like the car rear-ending the car that is stopped [and] the car flying past the police officer that is stopped for [my bus’s] red flashing lights.” She blames the law-breaking that she witnesses, “especially in residential areas,” on people being inconsiderate or ignorant of the law. 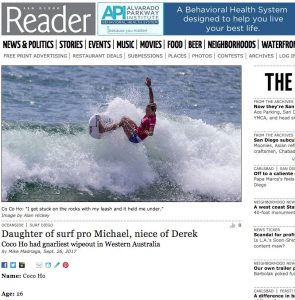 Coco Ho was competing in the SuperGirl Pro in Oceanside on July 29. At about 2:20 p.m., she won the round.

Ho, 26, is a Hawaiian native, the daughter of pro surfer Michael Ho and niece of Derek, also a professional surfer in the ’80s and ’90s.

When Ho finished her heat, young girls approached her to take photos of her and her Matt Biolos 5´6˝.

“My advice to the younger girls and boys coming up in surfing is to get the ocean knowledge down….

“My gnarliest wipeout was at Margaret River at Western Australia. I got stuck on the rocks with my leash and it held me under.”

Her favorite spot to surf in San Diego is about 13 miles south from the competition. “I spent a lot of time in Encinitas.”

Click here for the full story. (Pages 34 and 35 in the print edition)

“The broken glass in the concrete wall has gone too far,” Ted said. He was referring to a three-foot-wall in his neighborhood where people used 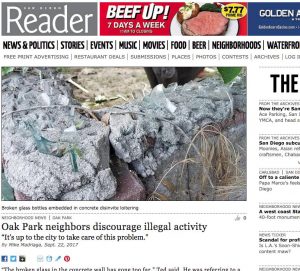 to loiter and sit. It has a layer of uneven cement on top with shards of glass jutting from it. “It creates a personal hazard to anyone that might be walking in the easement, and should be removed.”

Ted’s a 54-year-old Oak Park resident in the retail business. He purchased his home in 2002 and he said he has been noticing more and more low-tech deterrents around his neighborhood — to make it difficult for homeless people to loiter, trespass, or squat.

“I think the sprinkler system by the back gate, or the misting system mounted along a fence line will only work until someone figures out a way to defeat that type of defense,” he said. “In the homeless case it’s installed over where they sleep, so with a twist of a knob up by the hose, they will have [water] on their stuff and [they] will move. If anyone says anything, it’s nothing more than watering the homeowner’s plants.”

When a neighbor saw the various do-it-yourself deterrents that Ted and others were posting on a social media thread called “Suggestion For Discouraging Illegal Activity Next To Your Property,” she responded, “This entire post is so dehumanizing. I feel embarrassed that our communities have people like this in them.”

Car shows are different in Tijuana 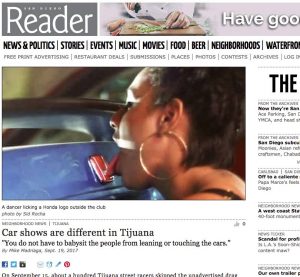 On September 15, about a hundred Tijuana street racers skipped the unadvertised drag races and met up with other crews in front of Déjà Vu’s Tijuana strip club (at Plaza Pueblo Amigo).

“It’s not far at all,” Omar said, as he rolled in from San Ysidro in his white 1990 Honda Civic. “It’s only, like, a five-minute-drive from the line.”

At about 6:30 p.m., the parking lot in front of the 100,000-square-foot strip club was full. There were about 25 lowered import cars and 25 motorcycles competing against one another.

“This is our first NKTRNL Car Meet,” said Oscar Sanchez. “In the U.S., you guys have the Krispy Kreme [car meets] — and here we have this.”

Sanchez, 32, is one-half of Some Ones Syndicate, the promotional company that put together the car-show-competition which is pronounced “nocturnal” by us gringos. For 250 pesos ($15), one could compete to win a trophy and also get some “artistic” shots of their car or crotch-rocket — with one or all of the four strippers present. Sid Rocha, Sanchez’s cousin and partner in this operation, served as the main photographer.

Click here for the full story. (Page 8 in the print edition)