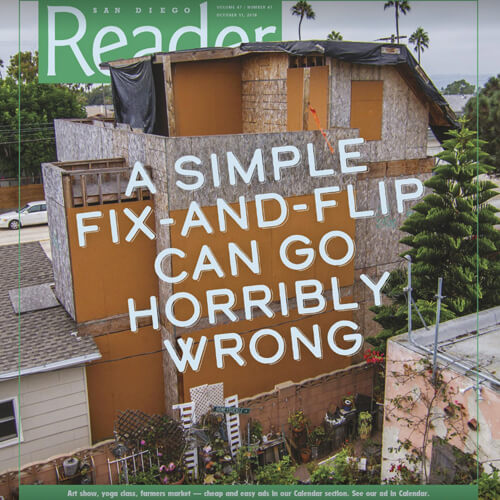 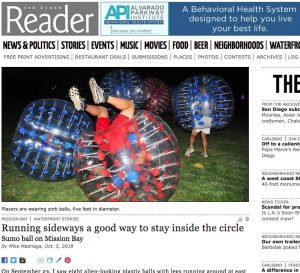 Running sideways a good way to stay inside the circle

On September 23, I saw eight alien-looking plastic balls with legs running around at east Mission Bay.

“Think basketball without the dribbling, and you wear a flag that can be pulled.”

“This game is called Sumo Ball,” said Carlos Rendon. “The object is to knock the opposing team out of the sumo-ring and the last team standing wins.”

Rendon is a 29-year-old physical trainer from Clairemont. He founded A Synergy Affair, which practices team building fitness.

Rendon has a few activities and games on his “recess for adults” agenda, but it seems that Sumo Ball is the most popular. 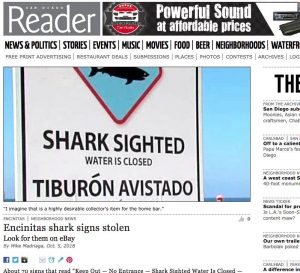 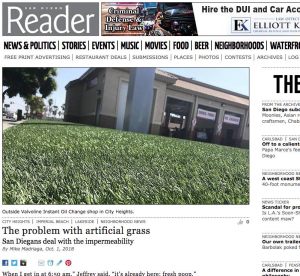 The problem with artificial grass

The business he manages has artificial grass by the sidewalk along University Avenue and 39th Street — and despite the pet waste bags within seven feet, dog-walkers aren’t taking them.

“We have to come out and clean up every morning,” Jeffrey said.

As I took photos of his shop’s artificial grass, it looked clean, but the smell of urine was apparent.

On September 29, about 200 collectors met at The Toy Addicts Trade Show in La Mesa; many were 1990s era toy collectors. 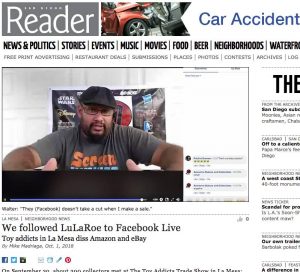 Walter had an E-Z up tent and tables packed with action figures from 1990s TV shows: like Dragon Ball Z, Bob the Builder, and PBS’s The Joy of Painting, which starred Bob Ross in the 1980s and 1990s.

“Pokémon had its moment,” he said, “because Pokémon Go, the mobile app brought it back.

“…. and like the Wolverine I have over there; that was from the Fox Kids Network from back in the day (1992-1997) on Saturday Morning Cartoons — the show was called X-Men: The Animated Series.”

Click here for the full story. (Page 14 and 28 in the print edition)

Now anyone can get to the water in Coronado 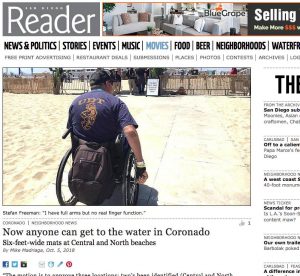 King was referring to the unanimous approval of the beach accessibility mats that will be rolled out over the soft sand terrain which is difficult for residents/visitors with physical challenges and mobility issues — and dogs (at Dog Beach); to pass through and get closer to the shoreline.

“I wasn’t aware that it included the path way to Dog Beach too,” said Barbara. “Everyone, [including dog-owners] need access to the beach.”

“It has been a dream of mine to be able to bring my Black Lab, Marley, to Coronado’s Dog Beach,” said Stefan Freeman.

Click here for the full story. (Page 6 and 14 in the print edition)