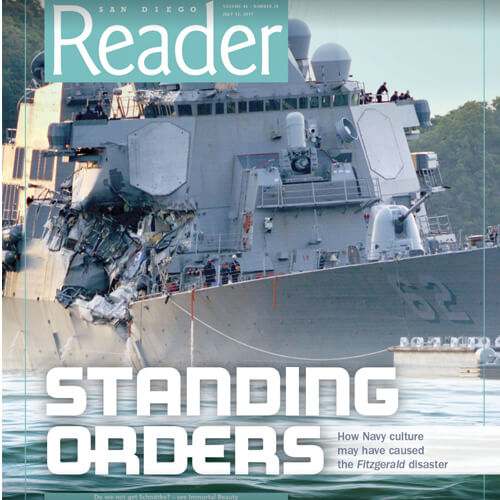 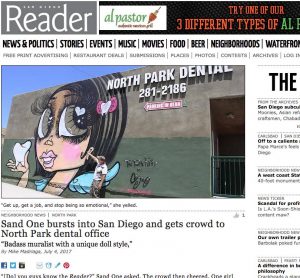 “[Do] you guys know the Reader?” Sand One asked. The crowd then cheered. One girl from her entourage said “that’s the one I was telling you about.”

On July 1, Sand One, an East Los Angeles based graffiti artist, busted out her spraypaint and hit up the side wall (by the alleyway) of the North Park Dental clinic. The mural was of one of her signature dolls with big eyes and eyelashes holding up a tooth.

“[There were] about a hundred people, it was just crazy,” said Edwin Lohr, “I couldn’t even walk through.”

Lohr, 59, is also known as the Mid-City Ambassador. He recently linked some businesses in Cherokee Point (which are a couple of blocks away from the Sand One mural) with other graffiti artists. 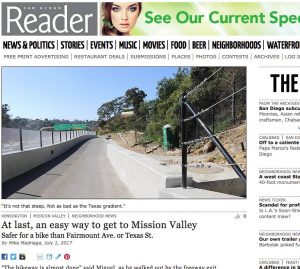 At last, an easy way to get to Mission Valley

“The bikeway is almost done” said Miguel, as he walked out by the freeway exit.

“The pavement, walls and fences look good to go,” he said, “the only things that look unfinished are the landscaping and the lights.”

In his photos, some of the plants look as if they were recently planted and are separated into rows — there is still a lot of dirt. About an 1/8 to a 1/4 of a mile up the hill, there were orange street cones which were neatly stacked, a porta-potty, and a portable faucet with a paper towel dispenser. “It looks like they might be picking this stuff up soon,” he said. 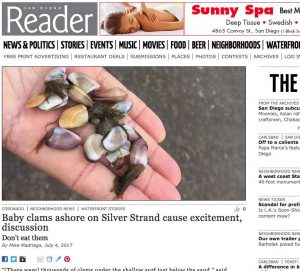 “[There were] thousands of clams under the shallow surf just below the sand,” said Shawn, “never have I seen something like this on our beaches.”

Shawn, from Chula Vista has been fishing for 20 years. Lately, although, he’s been learning to boogie board with his kids, wife, niece, and godson. On July 1, at around 11:30 a.m., their experience bodysurfing at the Silver Strand State Beach was wee bit more painful if they wiped out in a certain area.

“I scraped my belly there,” said his seven-year-old niece. His daughters pointed to what they presumed to be a long (approximately 50 yards across parallel to the shoreline) patch of grass. When they stepped inside the patch, it was hard and “crunchy-like,” said one of the kids. The presumed grass was hair strands coming out of the “thousands of clams” partially buried in the sand.

“I told him not to touch the fence,” said Kimberly Keo, “you will get shocked.” 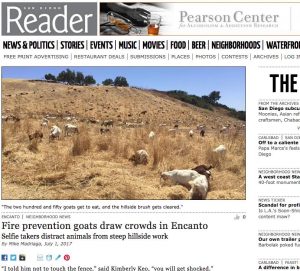 Keo was referring to the electric fence that separated the parents and kids from the many goats grazing on an Encanto property on the corner of Imperial Avenue and 61st Street.

On June 27, Moises the groundskeeper, was adding an additional perimeter fence to the annual neighborhood-spectacle across the street from the trolley stop.

“Are we able to pet them?” asked one kid. “Can we go up the hill, inside?” asked another.

He said he was bombarded with questions the whole day as he trimmed the bush by the sidewalks with a weed whacker and as he installed the new three-foot-tall perimeter fence. He also admitted that his “English was not good.” (Much of the interview had to be translated from Spanish). 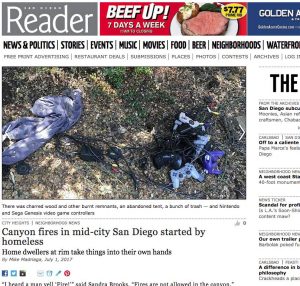 “I heard a man yell ‘Fire!’” said Sandra Brooks. “Fires are not allowed in the canyon.”

Brooks, like many of her surrounding neighbors, is concerned for the safety of their homes that sit above Manzanita Canyon. She’s been living in City Heights for almost 50 years; her parents purchased the house in the 1940s.

“I smell the campers cooking nightly, so I know they are burning fires down there,” she said.

On Sunday (June 25) at about 2 a.m., she was awoken by what sounded like a motorcycle or an ATV within 100 yards down the canyon from her bedroom window. She called the non-emergency line but no one answered. After she hung up, she heard a man say “Fire! Let’s knock this out before we go home.”