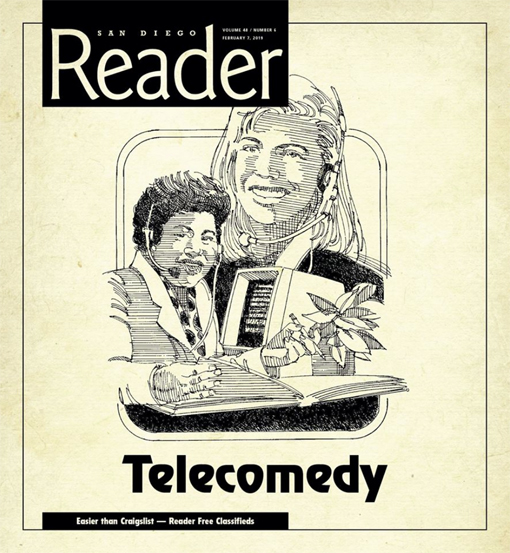 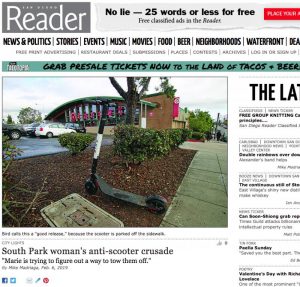 “I yell at them motorized scooter and bike riders to get off the sidewalk,” she said, “I have been known to stand in the middle of the sidewalk, hook my cane into the the wrought iron fence and hold it with my left hand in front of me. Like this. I will block the sidewalk and tell them to get back onto the street and what they are doing is illegal.”

Marie, 62, has grown tired of the motorized scooters and share bikes left on their sidewalks; so much that she used to lift and walk the scooters and bikes across the streets on a daily basis — until she sustained some injuries.

I spoke to Marie at her home on Grape Street between 30th and Fern.

“I move them by the Discover Bike rack in front of Target (kitty-corner from the plaza) or on the other side of Grape Street,” she said. “About three months ago I was moving a Bird off of our Grape Street plaza and as I put it down across the street, the back wheel bounced up and the kickstand came right down in the middle of my foot and broke my [toe] bones; there’s still like an [indentation] in my foot — look ….

She was referring to the rash of cat attacks reported on the Ring and Facebook apps.

“Both of my [Pitbull and Catahoula] dogs are now scratched, bit and bleeding,” said an IB resident on Facebook. “Thank GOD neither of them had their eyes hit.”

“Oh my, you don’t think cats can do that much damage,” Julie said about the “bloody” Facebook photos.

On January 28, I spoke to Julie and a couple of dog owners at Veterans Dog Park on 8th Street which is a block north of Imperial Beach Blvd. and a block east from the street where the bloody photos were taken.

Julie brought her four podencos (Aroa, Olive, Rusty and Raton-the-newbie); they were running and jumping around the 18,500 square-foot off-leash dog park — as we conversed about the “bully cats.”

“Two months ago, three of my dogs were also attacked close to this park ….

Even the DA buys into Alphabetic Evolution 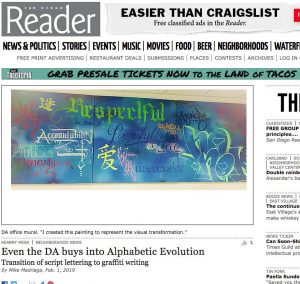 On January 25, Jose Venegas finished painting a mural titled Alphabetic Evolution at the juvenile office of the district attorney, located at Meadow Lark Drive, northeast from 163 and Genesee.

“This 15-foot painting represents the bridge that connects the transition of script lettering to graffiti writing, as an art form,” Venegas said. “The progression of typography styles in the United States, from the Declaration of Independence to the iconic font of the New York Times newspaper, and eventually to the side of subway trains in New York City — is the story of letters.”

Venegas is the current manager and part-founder of Writerz Block, a 10,000 sq./ft legal-graffiti-yard located in Lincoln Park. He is a resident artist of the San Diego Cultural Arts Alliance, which tries to redirect troubled youth.

Venegas has been spray painting murals since the 1990s ….

A camel for San Diego Somalis

She was referring to a new red colored bike rack that measures about four feet long, on the corner of 50th Street and University Avenue — a couple blocks east from Euclid Avenue in City Heights. 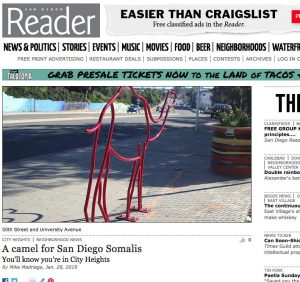 On January 25, I spoke to Kee, an Urban Corps employee and City Heights resident; she was hanging out at the game tables a few feet away from the bike rack.

“This being a refugee community, it’s [design is] appropriate for the Little East Africa setting,” she said, “it’s kind of creative.”

For now, “only one camel shape bike rack was installed as part of this collaborative project,” said Jose Cervantes from the City Heights Business Association. “The [Dero Bike Racks] vendor does offer several designs, but no other designs were installed ….

Click here for the full story. (Pages 8 and 30 on the print edition)

Van-lifers on Fiesta Island: you are subject to police profiling 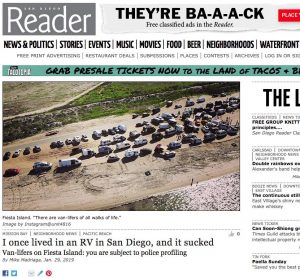 On January 26, about 150 van-lifers converged at Fiesta Island.

Jarrod, 33, rolled to the Vanlife Meetup in his 2003 Ford E-350 ambulance that he purchased from Pennsylvania last week.

“[I believe that] most of the van population here are doing it out of necessity,” Jarrod said. “I think only a few do it as a hobby and all of the people at the event yesterday do it as a lifestyle.

“There are van-lifers of all walks of life: some that’s low-income needing shelter; some that’s soul searching; some that’s wanting freedom from ‘the system’; and some with excess money that got caught in the romantic Instagram photos of van-life and want to buy all the gadgets and go all out ….

Click here for the full story. (Page 30 on the print edition)

A tidal island in Mission Bay; you may be able to walk to it

Leisure Island at Mission Bay might be one of San Diego’s only sandy “tidal islands,” if you can catch it on the right day.

A tidal island is a body of land that is connected to the mainland during low tide and can be reached by foot. When the tide rises, the same body of land is separated from the mainland, making a bonafide island. 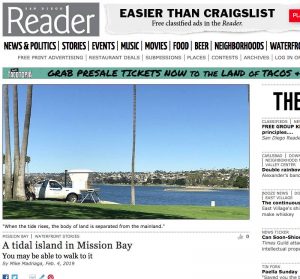 Since the 1990s, Willy of Clairemont has been running and walking at Mission Bay. “Yes, I have seen that pathway that leads from behind the bathroom to the island,” Willy recounted, “but not today.”

According to Google Maps, Leisure Island is located at 2081 East Mission Bay Drive. The island, which is located inside Leisure Lagoon, received five-star reviews. One read, “It is just a tiny island with an area of like 50 square feet ….

Click here for the full story. (Pages 36 and 73 on the print edition)