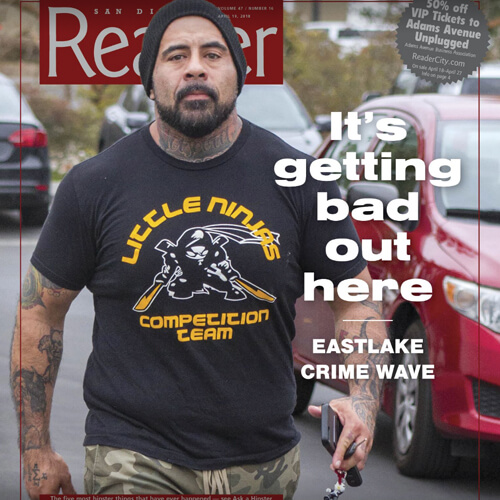 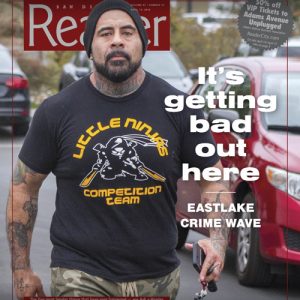 Eastlake was considered by some San Diego residents to be refuge from the criminal activity that occurs elsewhere in our county. But in the last year, the would-be suburban utopia, which is about 12 miles east of the Chula Vista Police Department, has not been immune to a string of crimes and scams.

Since 2018 began, Crimemapping.com has listed 329 crime incidents that happened (until March 7th) in Eastlake and the surrounding areas. Consequently, residents here are becoming more vigilant and posting news of anything suspicious to their social media accounts. Some say this is causing a needless neighborhood panic. Elias Gallegos isn’t one of them.

“People are like ‘The only reason we are hearing about [the uptick in crime] now is because of social media,’” says Gallegos.“That’s bullshit. I grew up here, and I don’t remember seeing aggressive people and gypsies panhandling at every single corner. I’ve never seen as many homeless people or drug addicts walking around the streets.” ….

On the morning of April 8, many of the visitors inside the Carlsbad Flower Fields were distracted, despite the flowers still being in bloom. 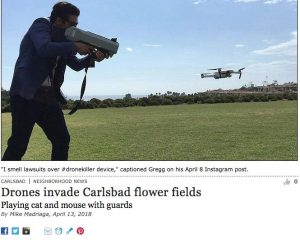 “OMG,” yelled one of teens taking a selfie with her friend inside the rows, “is that drone even allowed in here?”

On the venue website, it states: “Operation or use of any drones, unmanned aircraft/flying systems, and remotely controlled flying machines, motorized or not — is strictly prohibited.”

The teens stepping past the green tape perimeter and inside of the growing fields, is not permitted either…. 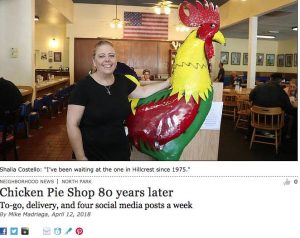 This year marks the 80th anniversary of San Diego Chicken Pot Pie Shop being in business.

“After the Peking Restaurant (circa 1931) closed last year,” said Lisa Townsend, “we became the fourth oldest restaurant that is still operating in San Diego County.”

The oldest operating restaurants that predated the pie shop on El Cajon Boulevard (on the corner of Oregon Street) are the Waterfront Bar (circa 1933), Las Cuatro Milpas (circa 1933), and Tobey’s 19th Hole Cafe (circa 1934)…. 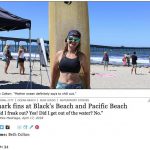 her on the north side of the Ocean Beach Pier.

“When riding a longboard you’re not going to be doing much carving … luckily for this board, there’s a lot of flex and a lot of rockers so it’s able to move that way. It’s fun to do turns and stuff but its also fun to see what the waves gonna do with you.”

Today, the waves were about two-and-a-half-footers….

Click here for the full story. (Page 36 on the print edition) 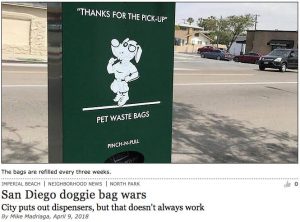 “It is estimated that the typical dog excretes between one half to three quarters of a pound of waste per day,” according to the City of San Diego website. “In San Diego alone, there are an estimated 600,000 dogs – that is roughly 136 million pounds of poop per year.”

“I have a cactus plant which I once discovered had been decorated with little blue bags filled with our favorite doggy stomach evacuations (poop),” said Ron Choularton from North Park. “Similar blue bags were found on my neighbor’s upstairs balcony, so it seems on less athletic days, he just flung his unhealthy packages down our rear alley.” ….

Click here for the full story. (Page 63 on the print edition)