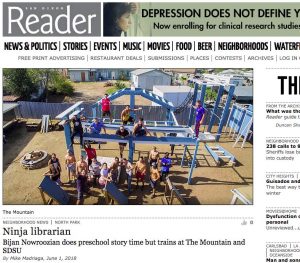 On June 6 at about 8 p.m., some children and their parents that frequent the North Park Library, will be in for a big surprise if their television sets are tuned in to NBC 7.

“My run will air on the Los Angeles qualifier episode of American Ninja Warrior,” said Bijan Nowroozian from El Cajon.

Nowroozian is a 29-year-old assistant-librarian that doubles as a ninja warrior. He stands 5’11” and weighs-in at 155 lbs. and attains his opportunity to compete on the ninja obstacle course to his library gig located on 31st Street (a block south of University Avenue).

“Every week, I do a preschool story time in front of 100+ people at the library,” he said. “I get as animated as I can be, as the children love it. I took that same approach into ninja and it certainly paid dividends, as everyone at filming loved my energy.”

Dane W. is a 32-year-old Navy chief petty officer who built a ninja gym in the backyard of his El Cajon residence. He was on the seventh season on the show but missed (by five competitors) making it to the city finals.

“It’s not all about the athlete’s ability now,” he said, “it’s more about the backstory because it is a TV show.”

Nowroozian trains at Dane’s The Mountain for ninja exercises, at Crunch Fitness for strength, and at the SDSU Arc for rock-climbing.

“Every person that ends up being on the show or that hopes to be on the show, every season, has to submit an eight-nine-page application with personality questions, your background questions,” Dane said. “…. and not just short answers either, full-on paragraph answers. The producers wanna know who you are and you have to submit two pictures of yourself and you have to make a three-minute audition video.

“We’ve been told by certain people that they’ve gotten 60-70 thousand applicants each year in the last couple of years.”

Sarah Bayne, Bijan’s girlfriend, agrees with Dane. “I found out from watching Bijan that it takes a lot of work just to apply and go through the whole process, from making a video application, going through phone interviews, etc.,” she said.

Bayne is a 23-year-old library clerk at the San Diego Public Library in San Carlos. She trains once a week with Nowroozian. “He likes to go to the gym and do P90x/insanity workouts, while I like to hike Cowles Mountain or run Lake Murray,” she said. “Spoiler alert, I’m the better hiker.”

Nowroozian can do thirty pull-ups, fifty push-ups, and 100 sit-ups — without stopping. “…. but I can also eat three large pizzas by myself in one sitting,” he said.

The couple’s last obstacle course run was at Big Bear on May 19.

“My legs are in so much pain,” Nowroozian said on The Armchair Ninja Podcast that he hosts, “I did the Mudrunner/Spartan Beast 2018 and it was by far the most excruciating physical thing I have ever done in my entire life, do not do that unless you are training all year around guys, the pain is indescribable.”

He added in the podcast, which aired on May 26, that despite his asthma (which, prior to the Big Bear event, has never affected his performance in competition), it took him seven hours to complete the obstacle course, and Bayne finished the course, too.

“It goes straight up to the 9000 feet peak of it,” he said, “so you are talking about a mile straight up with no breaks and [then] straight down where so much pressure on your knees. There’s no flatland or anything.”

The podcast, which he’s been a part of for a couple of years, is about the reality show, Team Ninja Warrior, and other local and national ninja competitions.

“There’s three foundations to being a good ninja,” Nowroozian said. “First is grip strength which is best maintained via rock climbing and bouldering — as seen on the show, rock climbers tend to do the best; second is comfort in the air and control of your body, all of this works well with gymnastics, parkour, and acro yoga; the third is just overall health and stamina for intense muscle strain …. many ninjas have strict diets and stay very lean close to the show.”

Before March 3-4, many San Diegans were bummed that the American Ninja Warrior Experience, that was expected to appear at the SDCCU Stadium, was cancelled.

“My kids were not happy about that [cancellation],” said Patricia, a mother who frequents the North Park Library with her toddler and 8-year-old, “but with our story-reader here being a legit ninja warrior, this makes up for that.”