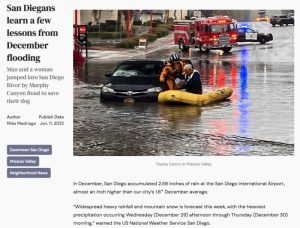 The original story was published in the print edition of the San Diego Reader in January of 2022.

By Mike Madriaga
In December, San Diego accumulated 2.58 inches of rain at the San Diego International Airport, almost an inch higher than our city’s 1.6″ December average.

In preparation, locals retrieved complimentary sandbags from the County of San Diego or CAL FIRE, then lined the flood-prone areas of their properties and surrounding streets and sidewalks. Other San Diegans headed towards Mount Palomar and Mount Laguna, where they got more than two inches of rain and snow, followed CAL FIRE’s advice. “Be winter driving ready …. Even the safest driver can still end up in an accident.” Local auto racers took precautions by removing cold air intakes, which sit low to the asphalt and are notorious for sucking floodwater into the engine’s cylinders, causing the engines to seize — or hydrolock.

Luckily, a day or two before New Year’s Eve, the rain wasn’t as heavy, and flooding receded. But San Diegans had good reason to be better prepared this time around, as two weeks prior, on December 14 — over 70 “Streets Flooded” reports were made on the Get It Done app.

“STREET FLOODED TRASHCANS FLOATING IN MIDDLE STREET” reported someone by Mission Gorge Road. “Pacific Highway and A St. flood badly every time it rains. This is true even after your team spent months redesigning the street,” read a report made at 2:31 pm, followed up with a photo depicting a black-colored SUV driven in water reaching the top of its wheels. Up in La Jolla, at 3:21 pm, a report read: “Storm drain clogged preventing access to school parking lot prevent parents and staff from entering or leaving.”

Most flooding reports that Tuesday came in from Mission Valley and Fashion Valley — as commuters by the boatload trekked in for holiday shopping.

At about 8 am, The River Rescue Team rescued a victim on Avenida Del Rio “with a high directional off their bumper for a one-point boat rescue.”

The River Rescue Team is a subsidiary of San Diego Fire-Rescue established in 1978 to “respond to emergencies created by flooding due to heavy rain. It is the task of the team to rescue people or property threatened, surrounded or entrapped by stationary or moving water.”

About 1:30 pm, the River Rescue Team rescued a man and a woman who jumped into the San Diego River by Murphy Canyon Road and the I-15 to try and save their dog from the rapidly streaming water.

“They were in that water, which was 52 degrees,” said Chris Babler, the Battalion Chief of San Diego Fire-Rescue, in a CBS News 8 interview. “Both victims are being treated for hypothermia.”

Usually, barricades are posted up to block flooded roads throughout Mission Valley and Fashion Valley during this time of the year. Rancho Mission Road by 24 Hour Fitness and the trolley platform in East Mission Valley appeared blocked from traffic. But a black Toyota Camry driver proceeded anyway; then the car conked out. Afterward, the lifeguards pulled up in a yellow-colored boat and rescued the Camry driver.

Also, that day, a San Diego State University student captured video footage of a driver driving a black Camry through a flooded street “in Mission Valley.” DaygoTV posted the video on their Instagram account on December 14. “Oh shit, it got stuck,” said the person filming.

“Because look how fast he/she was driving the Camry, the water got all up in the engine,” Felipe M. from El Cajon explained to me. “The water probably got in the air filter and throttle body and then killed the engine — hydrolock. Also, if your coil gets wet, it’ll start misfiring, and that’ll shut the engine off too. And lastly, if the connector to the crank sensor gets wet, that’s not good.”