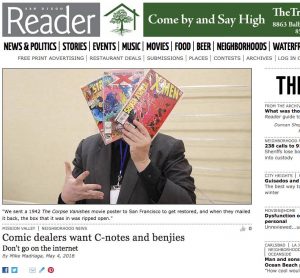 On April 28, John purchased a Howard the Duck comic book at the San Diego Rocket-Con.

Rocket Con. “If you are going to buy a high-end comic book online, you better buy one that’s certified.”

For the month of April, this was the third comic book and toy show in San Diego County.

Like other San Diego collectors, John, a 54-year-old graphic designer, has reverted to the cash-and-carry method of purchasing, like the days here at the Scottish Rite Event Center, which is on the opposite side of I-8 from the Westfield Mission Valley mall.

Andy from Empire Collectibles had his booth right at the entrance.

“People are tired of the deception of online sites, like Amazon, Etsy and eBay,” John said. “Items are sometimes different from what the ad states.”

John used to buy and sell comic books here when there was a similar show called The San Diego Mini Con.

On Saturday, Mister X was selling DVDs, posters, and comic books. In 1994, he sold bootleg VHS videos at this venue. “When Paul [Martinez] was promoting the show here, the internet wasn’t prevalent,” he said. “This 2018 show is more organized, with more dealers from out of town.”

Scott Hudlow, the owner of Comic Wise, trekked in from Bakersfield, which took him over four hours. His booths sold toys and vintage comic books. He prefers to buy collectibles face-to-face because it’s more personal when you remove the comic book from its plastic, flip through the pages, smell if it’s aged properly and not moldy, and then hand over the cash. “If you are are going to buy a high-end comic book online,” he said, “you better buy one that’s certified with a grade so that you know what you are getting in the mail.”

Professionally graded comics that are vintage, can go for more than double what a non-graded book can go for. John and other professional comic dealers, scoop up underpriced and undervalued non-graded comics, and then send them in to get graded.

“It’s different when you negotiate with C-notes or benjies [$100 bills],” said Ramon, “rather than trying to lowball online via a direct message.” Ramon’s been “cherry-pickin’” at this venue since the early 1990s. “I usually birdwatch and see who’s hurting (not making any sales), then when I see ’em packing their comic book long boxes, I hit ’em up with a cash offer.” This day, although, his wad of benjies remained unscathed.

“That petty self-serving little bitch,” Mr. X said, “he probably said ‘Look, he’s a [hard-up] dealer so I can victimize him.’”

Mr. X couldn’t give me a dollar amount on his sales, but he did say he broke even.

He paid $100 to sell here which included an eight-foot table with space behind it. The 55 spots were sold out.

“Comic book and toy shows still exist because a lot of people are gun-shy buying from the internet,” Mister X said. “The online sellers use stock photos of certain product that looks pristine, and then when they get it in the mail, its worn out and looks like crap.”

Other collectors said they get their packages swiped from their porches and mailboxes.

Ramon’s been a victim of the reverse-bait-and-switch a few times. “I sold a first appearance of Venom (Amazing Spider Man #300) online for like $300, then the customer said the comic was damaged in transit. I said ‘Send it back’ and she sent me a p.o.s. back that wasn’t even my original comic. The one that I got back was worth maybe $100. To make matters worse, she left me a negative remark on my profile which dropped my feedback-percentile. Then I was put on probation where I was limited to the dollar amount I could post per month, and when I did make a sale, my money was in limbo for like a week.”

Other dealers here agreed that unwarranted probations to sell on the collectible-based websites are attained via bogus reports that are made by their competitors or scammers.

“I quit selling online because of the BS,” John said, “then I started selling at Frank & Son [at the City of Industry] in 2009 to 2012, twice a week. I made more money there than online, and I didn’t have to deal with the drama associated with returns.”

“There’s just too many people ripping people off on the internet,” Mister X said. “We sent a 1942 The Corpse Vanishes movie poster to San Francisco to get restored, and when they mailed it back, the box that it was in was ripped open [without the movie poster] ….. and then a month later I saw the same exact poster on eBay for $5,000.”

Ramon admits that selling online is more efficient than selling at shows, but “you take a risk shipping expensive comics and toys, and cross your fingers that the buyer is not a shyster.” He now consigns his higher-end items at local comic book stores.

“I use to make over $100K on eBay sales back in the late 1990s until 2007,” he said, “then the market crashed in 2008. Then these youngsters that were into geek culture cleaned house in 2010-2014, because they would use their social media pages to draw the clients back to their [point-of-sale] pages. Many of us wondered why our online stores drew less and less traffic and our merch just sat. It was because the online traffic and money, was flowing to these [social-media-savvy] kids. Also, eBay’s algorithm system wasn’t Google friendly, like before … this really killed a lot of us dealers that didn’t jump on the social media bandwagon.”

Andy from Empire Collectibles had his booth right at the entrance. He was stoked to have sold a Captain America #117, the first appearance of Falcon. “I hope shows like this are successful and grow,” he said, “even though we didn’t have a great day.”

He blames his slow sales on the show being on Saturday, rather than Sunday.

Two dealers estimated “about 500” customers to have entered throughout the day. Bob Bellman, who sold toys, estimates less.

“All of these people, including myself, are comfortable with hands-on sales and I wish it would make a comeback,” Bellman said.

On April 15, there was a toy and comic show at the VFW in Chula Vista; then the week after was Comic Fest at the Town & Country in Mission Valley (photos available here); then the Rocket Con on Saturday (photos here). On Cinco de Mayo, the dealers can lie low and celebrate Free Comic Book Day and the next day opt to sell at Robo Toy Fest in Pasadena.

” …. then the week after I’ll be going to Indio for the Fantasia Con and then the following week, to Comic Revolution in Ontario,” Hudlow said.

“People are trying to get the smaller shows going because Comic-Con International is so big,” he said.

Many of the dealers and shoppers here were not able to access tickets for this year’s annual show at the San Diego Convention Center come July. Including Marvin, a U.S. postman. “I’m buying comic books fillers to complete my runs,” he said during our interview. Marvin’s purchased comics at this venue since the 1990s as well. “It’s more personable and you get to select from different dealers,” he said, “I happily paid the $10 entrance fee for this shopping experience.”

An overview of the influence of Comics in San Diego takes place June 27 at the Gaslamp Tavern, to include a talk by Ted Adams, Founder and CEO of local comic company IDW Publishing.

Original story featured in the print edition of  San Diego Reader (May 4, 2018)