The original story was published in the print edition of the San Diego Reader on March 17, 2020.

By Mike Madriaga
On March 12, the Rocket Con promoters postponed their upcoming comic book, toy and collectibles show in Mission Valley, to August 1-2.

Anaheim’s WonderCon — a subsidiary of Comic-Con International: San Diego — also canceled their three-day show next month with no word on a new date, “to protect public health and slow the rate of transmission of COVID-19,” says the organization in part. “We will begin processing refunds for badge purchases in the coming days …. We continue to work closely with officials in San Diego and at this time no decision has been made regarding the rescheduling of Comic-Con slated to take place this summer; July 23-26, 2020.”

(Just hours before the aforementioned announcements, WonderCon stated the exact opposite: “At this time both shows, WonderCon Anaheim and Comic-Con in San Diego, are moving forward as scheduled,” — which confused many local cosplayers and comic book fans as the cancellation posts went viral.)

Billy Khang, an Imperial Valley news reporter from Linda Vista, noticed the “switch up” before the weekend.

“Canceling or postponing WonderCon was the right thing to do,” he said to me on March 15. “The fact that so many people from all over the world attend that event, would have been a huge liability on the organizers’ hands. Also, it would’ve looked bad if they kept it going while other places like Disneyland and the March 12-15 Emerald City Comic Con [in Seattle], chose otherwise. It shows that it’s not just about money, but that they care about the fans.”

Some local comic book fans are not fazed by the County of San Diego’s March 13 order prohibiting all public or private large gatherings, which is any event or convening that brings together 250 people or more, to a single space at the same time.

“I don’t have it, [COVID-19, and] most people don’t,” commented MC underneath WonderCon’s cancellation post. “Since a small number of people have it, less than the flu, why shut down WonderCon?”

MC is a local comic book writer, designer, and illustrator who attended the San Diego Comic Fest show at the Four Points by Sheraton in Kearny Mesa on March 6.

“Why didn’t they do it when the flu has hit more people,” he questioned, “and had a higher mortality rate then?” 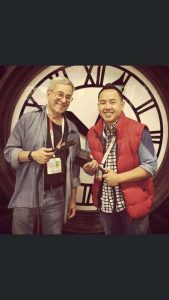 Billy Khang (right): “Canceling or postponing WonderCon was the right thing to do.”

John S., a cosplayer and artist, was at the eighth annual Comic Fest selling old toys and comic books. “There were like five people walking around with [surgical] masks on,” he said. “For me, business was so-so. This coronavirus could be ‘crapaganda’ and lots of us dealers will suffer because we make a living from these shows.”

“The people that make a lot of money during the cons are the costume designers for us cosplayers,” Khang continued, “and they rely on that clientele every year to make ends meet. Unfortunately, to have two cons like Emerald and WonderCon canceling is going to hurt them.”

Khang cosplays as Marty McFly from the Back To The Future franchise and a Speed Racer character, and has been attending the annual convention at the San Diego Convention Center since 2013; last year he covered it by interviewing fellow cosplayers who dressed as their favorite characters, for his news station.

“Our city relies on the Con annually since it brings hundreds of millions, if not billions of dollars to the San Diego economy,” he said. “We’re talking restaurants and hotels in downtown who go all out to meet the needs of the fans. People come from all corners of the world to attend the Con, and hopefully, there’s a vaccine by then and everything continues as usual. But ultimately, if our Comic-Con was to close, I’d be all for it.”

“It could take longer than that to find the vaccines,” said Willy, a Linda Vista toy dealer who has been selling at the Con since the 1990s. “And if that’s the case — and our Con is canceled in July, what are us dealers that eat and pay for bills [from the money earned at comic and toy shows] going to do? Other dealers I know don’t have retirement savings or health insurance. I have buddies that work in the back of the convention center that set up our displays, and even they say they are laid off, for now. Oh man, we also have the kids that work the concession stands and the security guards that patrol the area…it’s not just us dealers that’ll suffer.”

A few San Diego residents took off from work to attend the canceled WonderCon in April, and many Comic-Con attendees set aside vacation days for our summer event as well.

“It’s understandable, but we’re devastated,” said a San Diego mother underneath WonderCon’s Facebook post, “[as a] family of five that already booked two hotel rooms months ago. The hotel said a hard ‘no’ to any refunds since they don’t want to lay people off. So we’re now out our hotel stay entirely. Hopefully, WonderCon will at least refund our ticket costs.”

I reached out to the mother, local comic dealers, and various cosplayers, like Carl — for a quote; as of press time they haven’t replied. 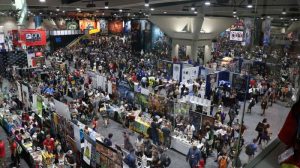 “…. I think almost everyone has whipped themselves into a hysterical panic, flogged on by media that has to feed a 24-hour news cycle,” Carl said in part on his Facebook account, “and that almost all of the hype is pure weapons-grade ‘bolognium.’ However, since I can neither control [n]or influence such things, I look forward to the new dates.”

“With the 100,000 [plus] people planning on attending our Con in July,” Willy continued, “and the rooms they booked, their flights coming in, lodging, food and drinks, car rentals, Uber and Lyft rides — there’s a lot riding on this, and we are all in this together.”