The Rising Price of “Chocolates”

When Lando Martinez returned to his south San Diego home on January 20, his 1995 Honda Del Sol was missing. “I parked the car in front of our new house on the 16th,” he said, “and we flew out to Texas to visit family. When we came back the following Monday, I thought my wife moved it into our garage, but she didn’t. It was long gone.” 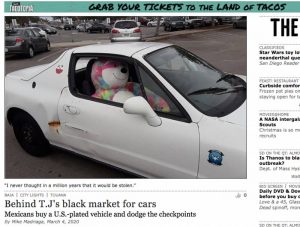 “When was it stolen?” I asked him on February 4.

While the 49-year-old Navy veteran and his wife were gone those five days, according to the Crimemapping.com database, about a dozen other cars were stolen within a three-mile radius of their south San Diego home near the intersection of the 905 and 5 freeways.

“I feel sorry for my husband,” Martinez’s wife responded underneath a photo she posted of the white, two-seater plastered with bumper stickers; the car has a dent by the driver’s side door; and sports black vanity plates that read ‘HOCUS 1.’ “It was part of his identity to his band…. The odds may be against us, but hanging on to hope that it will be located.”

Martinez is the lead guitarist and a singer for Hocus — an Imperial Beach rock band that sort of sounds like The Ramones, Nirvana, and Black Sabbath. 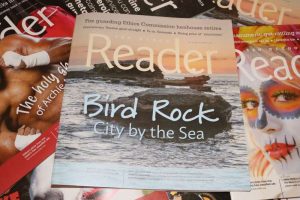 The original story was featured in the print edition of San Diego Reader on March 5, 2020.

“Luckily, my instruments weren’t in the car,” he continued, “I asked around our neighborhood and everybody was stumped, saying, ‘We’ve never had this type of stuff happen in our neighborhood.’”

Martinez filed a police report the same day they discovered the car was stolen. On January 22, his buddies suggested that the “HOCUS mobile” might be south of the border; their house is about four miles north of the San Ysidro Port of Entry.

“I just got back from San Ysidro [Port of Entry],” he said on a Facebook update, “they only read plates coming back into America… not going into Mexico…. Getting a car stolen sucks.”

Then on the 27th, Martinez got a call from the “Esurance insurance company. They said: ‘Hey, we found your car in Ensenada, Mexico,’” Martinez recounted, “and I was like, ‘Wow, how did you guys do that?’ She said, ‘We have agents worldwide.’”

Luck was with Martinez, to a point. “The thing is,” he explains, “I just had liability and uninsured motorist insurance coverage, because I never thought in a million years that it would be stolen.”

“Did it have a VTec motor?” I asked Martinez. In the ’90s-’00s, many San Diego owners of Del Sol swapped out their stock 70-horsepower D Series motors with the 160-horsepower B-16 VTec motor. Because of the popularity of the swaps, Del Sols were targeted by thieves on both sides of the border. 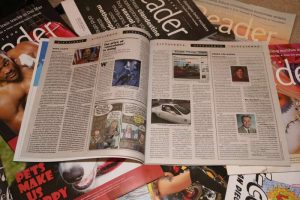 “No, it didn’t have that motor,” he responded, “I did buy some parts for it, and it went pretty fast on the Silver Strand…. But mine is a beat-up Del Sol. It was a car with character, and it was me. It may not be worth a lot of money, but to me, it’s worth emotionally: a million.”

“Down here, Del Sols that are chocolates, sell for between 1000-1400 dollars,” said Juan, a Tijuana import racer who builds what he calls “rápido y mugroso Hondas” — parodic Spanish wordplay on the Fast and the Furious franchise.

“Chocolates” is Mexican slang for cars that have expired U.S. registration, that are driven illegally in Mexico. Mexican nationals are not permitted to drive vehicles that are still within the U.S. system. A vehicle must be imported and registered in Mexico for them to be legally driven.

Juan sent me a link to a January 29 Cadena Noticias story that was headlined: “In BC, a thousand pesos will be charged to ‘chocolate’ cars to register them.”

“The Ejecutivo Estatal (state executive) sent to congress (on December 30) an initiative to create the Institute for Vehicle Identity and Pollution Control of the state of Baja California,” says the news report. If passed, the initiative will be an equivalent to our Smog Check Referee Program. “The document sent to the… Legislature details that the institute aims to carry out a vehicle census to assess the levels of polluting emissions. 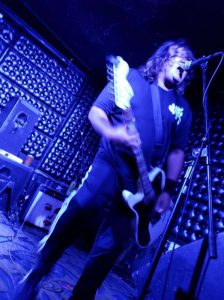 “They clarify that the certificate issued by the institute — where the minimum cost will be 1000 pesos ($53 USD) — will not validate the legal status of the vehicle. A fine of more than 6000 pesos ($322 USD) is foreseen for the owners of foreign vehicles that are not registered with the Institute of Vehicle Identity and Pollution Control of the state of Baja California. It is estimated that in Baja California, there are 500,000 foreign vehicles, so the state would be earning 500 million pesos (about $2.7 million USD).”

To import a vehicle from the U.S. into Mexico — legitimately — is not an easy task.

“It costs $1500 to $3000 USD to import a car or truck, add about $300 to $400 USD for license plates,” said Pedro Vargas, a Tijuana-based race car driver and race promoter. “Say a Tijuana family saves their hard-earned cash to buy a used family vehicle that’s U.S.-made and about 15 years old for maybe 1000 bucks. Now, add the import tax — and it’s out of reach for the average worker.

“The black market exists because national automakers have heavily lobbied for foreign used vehicles not allowed to be imported, but the kicker is our public transportation is inefficient, and somewhat expensive for the average citizen. So, a lot of folks just buy a U.S.-plated vehicle, a chocolate, and chance it. They dodge the checkpoints.”

While speaking with Valdez, I searched on the Facebook Marketplace in Tijuana. I found a 1995 Honda with California plates being sold in Tijuana for 16,500 pesos ($886 USD). I found another person selling 2020-2022 license plate tags and DMV-looking paperwork.

“Our government really leaves no choice for families but to drive outlawed vehicles,” Valdez continued. “We all need to take our kids to school, get to work, go buy groceries — the basic stuff.” 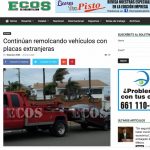 Trailers with foreign license plates in Baja, are targeted as well.

According to a January 24 Ecos De Rosarito news report: “The promises of the Secretary of Citizen Security, Francisco Javier Arellano Ortiz, remained up in the air, to combat police abuse and extortion against tourists… the trailering (or towing) of vehicles with foreign license plates would be prohibited…. Other tourists have complained about what looks like a police hunt against vehicles with American license plates, which for any reason they stop and tow.”

Some Americans that trek into Baja became concerned about the report, particularly the “trailering vehicles with foreign license plates would be prohibited” part. I reached out to Diego Knight, a bilingual reporter from Rosarito and he said: “It’s not about trailers, only the vehicles.”

“By that report, it means that cops have been towing away vehicles with foreign plates, even though the owners had legal status in the U.S.,” Valdez said.

“Is this affecting your upcoming San Pedro Mártir Hill Climb race in October?” I asked Valdez.

“It should not affect the racing scene,” he responded, “if owners of the vehicles and trailers show the proper paperwork matching their legal status in the country, or, show importation documentation of the vehicles. But, as far as I know, yes, the police (federal and municipal, as well as the SAT — the Mexican revenue agency — are confiscating vehicles not legally imported into the country. This applies to Mexican nationals driving foreign licensed vehicles.” 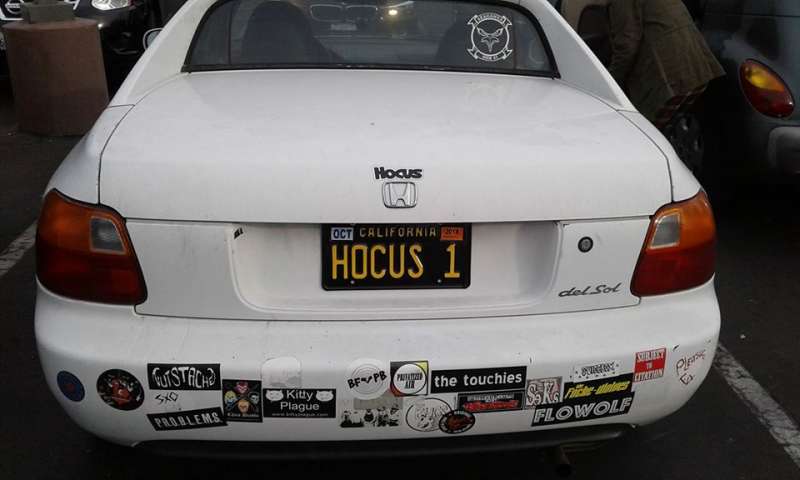 And that’s likely how Martinez’s Honda Del Sol-turned-chocolate, was located and impounded in Ensenada. “The insurance company sent me contacts for the consulate of the U.S. in Tijuana,” Martinez said, “they have a stolen vehicle department in the consulate. I contacted the email address, mexcarrecovery@state.gov, and about a day or two later they contacted me saying that the state police in Ensenada has it in their custody, and since it’s in the state police’s possession, I have to go through the consulate to go get it…. On the Tijuana consulate’s section of the U.S. government website, there is a phone number listed, but when I called it it directed me to the email I mentioned.”

After I spoke with Martinez, I reached out to the consulate about the vehicle recovery process. As of press time I haven’t received a response.

“What are the steps to retrieve a stolen U.S. vehicle that’s in police custody in Baja?” I asked Martinez.

“You need one personal identification,” he said, “a photo ID such as a driver’s license, an identification card, or passport; two certified copies of title, vehicle registration or proof of ownership, and then it translated to Spanish; two certified copies of the police theft report in English and two copies translated to Spanish. If a representative for the owner picks up the vehicle, they will need two powers of attorney in English and Spanish — both must be notarized; you have to contact the Car Recovery Unit in the U.S. Consulate in Tijuana in order to get a ‘Consular Letter.’”

“So where are you at now in the process?” I asked.

“I’m still waiting for the San Diego Police Department police report,” he said, “it’s been two weeks. I also asked the consulate about the condition of my car and they haven’t responded yet.”