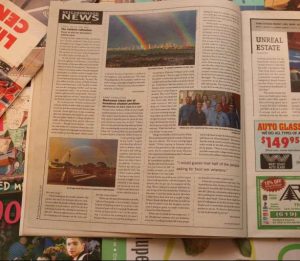 The original story was published in the print edition of the San Diego Reader on February 21, 2019.

By Mike Madriaga
In the last couple of weeks, the elusive “double rainbows” have been spotted throughout San Diego County.

“It was surreal,” said Chris Mannerino, “On February 5, I saw it out of my new office and raced up the hill just in time for the picture.”

Mannerino is a Point Loma-based realtor that photographs landscapes as a hobby; he’s caught three sets of double rainbows in the last two weeks. “It was luck and timing mostly,” he said. “My new office is at the corner of Shelter Island Dr. and Rosecrans, and I’m able to look out and see the changing weather and run out at a moment’s notice.”

He posted the double rainbow photos on his social media.

“Wow it’s pouring right into our bay,” responded one of his friends; another said: “Doesn’t look real!”

Per curiosity.com: “Double rainbows (or primary rainbows with visible secondary rainbows) are just the result of extra bouncy light, basically. When light rays escape a raindrop after two reflections, two rainbows are visible. The secondary rainbow is almost double the width of the primary bow, and its colors are reversed — though much fainter — so that the reds of the two rainbows always face one another. Because the light gets an extra bounce in the raindrop, they flip again, which causes the color swap.” 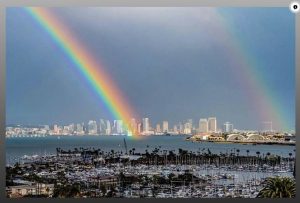 On January 31, the same double rainbow was spotted from Carlsbad and arching atop the Crystal Pier in PB; another set was seen and photographed in Valley Center on February 10.

When looking at the double rainbow, the darker sky that’s in-between the two rainbows is called Alexander’s band, named after Alexander of Aphrodisias, who in 200 AD was said to be the first individual to note the colorful occurrence.

“Because light bounces off the back of a raindrop and emerges on the same side it entered, the area of sky below a rainbow is the brightest,” says curiosity.com. “The same thing happens in the secondary rainbow as a mirror image, so the light is brightest above the faint rainbow. This leaves you with a rainbow sandwich of dark sky.”

There are other variations of rainbows, including monochrome, supernumerary, twinned, full circle and reflective.