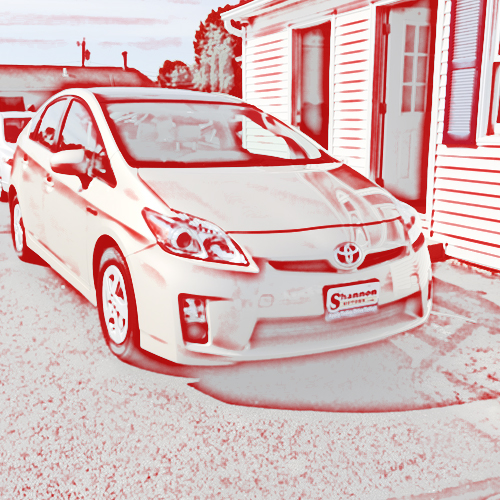 Toyota Priuses are targeted by thieves 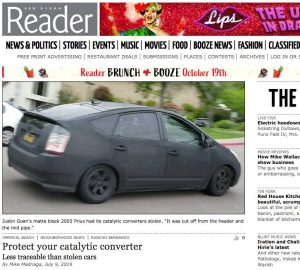 The original story was featured in the print edition of San Diego Reader on July 18, 2019

By Mike Madriaga
“I see about one of these cars with stolen catalytic converters a week, go through my repair shop in Rancho Bernardo,” said Justin Goen. “It pisses me off and I think recyclers need to figure something out to help stop this.”

Recyclers pay good money for certain catalytic converters because of the rare metals within its housing — palladium, platinum, and/or rhodium.

On July 7, I communicated with Goen after we both saw the same photo online of a Toyota Prius missing its catalytic converters underneath. Goen is an auto technician and race car driver from North County; his matte black 2005 Prius had its catalytic converters recently stolen. “It was cut off from the header and the mid pipe with a battery powered electric saw by the looks of it and the oxygen sensor went along with the two cats.

“The first thing you notice when you start the car is the loud exhaust sound; then you will have a check engine light from the missing oxygen sensor, followed by a raw fuel or exhaust smell.”

The Prius in the photo that we both saw was burglarized in Imperial Beach on June 25. I reached out to the victim for an interview but as of presstime she hasn’t replied. Her photo posted on Facebook depicts the under chassis of her Prius; the caption reads in part: “They used a saw to cut it out and I’m assuming they must have jacked up the car because it’s a Prius and really low to the ground. I did report it to the police and apparently this has been happening to Toyota Priuses, so if you have one — try to park in a safe place if you can.”

“Hybrids get targeted along with older vehicles from the 90s because they contain higher levels of rare earth metals inside their cats,” Goen added.

Under chassis of Imperial Beach Prius

The Larry H. Miller Toyota Lemon Grove dealership has a Prius catalytic converter listed for $939.14 a piece; Amazon is selling one for almost $2,000.

On July 1, Goen posted a YouTube video of him driving his “weed wacker” and “lawn mower” sounding Prius; he captioned it: “My cats were stolen, so I wanted to show everyone how stupid it sounds for your entertainment at my expense.”

“Unfortunately, the catalytic converter on the Gen II Prius is particularly accessible; that’s why it’s a favorite for thieves,” said Jo, another Prius owner. “There’s not a lot you can do about it, other than to etch your VIN number into it to prevent those who cut them out for black market resale from taking it or weld a cage around it to make it more difficult to get to.”

Others have welded rebar along the sides of their cats to make it harder for the thieves to cut.

“[Stealing Prius cats] is much easier to deal with and less traceable than stealing cars,” Goen said. “I feel bad for the victims, they usually have to pay out of pocket and can be a tipping point that can result in major consequences for them — especially when they are living paycheck to paycheck as many San Diego residents are these days.”

Goen wasn’t the only Prius driver sharing videos of the 48-to-50 mile per gallon hybrid; in United Kingdom, a few videos have been posted of Priuses that are burglarized in broad daylight, by guys working in tandem: the first man lifts the vehicle with a floor jack; the second man crawls underneath with an electric saw and hacks away from underneath the car; the first man stands by and looks out for law enforcement or lookie loos; the second man climbs out with catalytic converter; the first man lowers the car back down; the “cat-jackers” take off.

Michael from City Heights saw the Prius cat-theft videos on YouTube; he too drives a Prius. “In United Kingdom, the thieves are brazen and steal cats in the daytime — I bet some Californians are copycatting them.”

“According to state law, we are not able to buy more affordable catalytic converters unless they are carb approved,” Goen explained, “unfortunately the only approved cats for the Prius are from the Toyota dealer. They typically sell for over $1,500, but when the cats are stolen, the oxygen sensor/s also get damaged or taken, so it ramps up the price closer to $2,000 or more on average. We cannot legally buy or sell used catalytic converters in this state, and lower cost aftermarket converters cannot be shipped/sold to California. Also, to complicate things further, state law makes the previous owner responsible for passing smog when transferring title and that includes repairing/replacing the cats.”