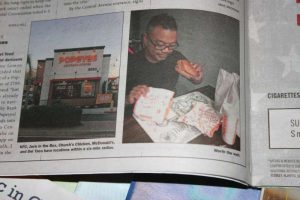 This month, those who live in Lemon Grove were soured by the grand opening of a Popeyes restaurant.

“Just two days open has already made it impossible to navigate the parking lot by Bank of America, as the [Popeyes] drive-thru line extends into the narrow exit onto Central!” exclaimed Charlie on our shared NextDoor app on June 2. “If I [were] BofA, I would post somebody in the lot and enforce people from getting inline or using that lot to park in.”

On Friday, June 11, about 7:27 pm, I entered the New Orleans–style fried chicken restaurant parking lot from the Lemon Grove Avenue entranceway, about a half-mile south of 94 and a half-mile west of the 125. The banks, BofA and the Union Bank next door were closed, and their patrons drove around Popeyes’ customers to get to the bank ATMs. My car was behind five cars waiting within the curvy drive-thru lane. Feet away from the drive-thru to the east is Lemon Grove Skatepark, packed with grom skateboarders.

“I too absolutely hate that it is a Popeyes, and not something healthier for our kids and families,” said Den on Facebook. “…. I am happy that it will bring more money into the city.” 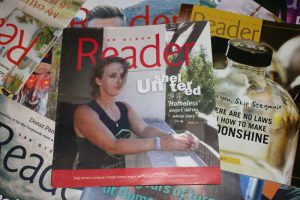 The original story was featured in the print edition of the San Diego Reader on June 24, 2021.

“Hmm, seems like the line would impact the fire station?” questioned Peggy from a Jamacha neighborhood. “Surely that cannot be blocked.”

After about 12 minutes, at 7:39 pm, I pulled up to the window and paid $16.57 for two chicken sandwich combos, including two soda pops and my choices of sides, Cajun fries and coleslaw.

“Are your chicken sandwiches still selling out?” I asked the window attendant.

The Lemon Grove Popeyes location is one of 2700 of “one of the world’s largest chicken quick-service restaurants” worldwide.

After the first four weeks of Popeyes’ launch of the 699 calories chicken sandwich on August 12, 2019, its growth in spend per panelist (year-over-year relative percentage) rose to 40 percent, according to the data platform Sense360, per qsrmagazine.com.

She replied “Yeah.” I looked behind me, and seven vehicles were waiting in line.

KFC, Jack in the Box, Church’s Chicken, McDonald’s, and Del Taco, all occupying restaurants within a six-mile radius of the Lemon Grove Popeyes, created their own chicken sandwich recipes and increased their sales, says the April article.

“So while some great results, replicating Popeyes’ trigger event is a unicorn target. Understandably so. As much as the brand has, impressively, continued heightened results—to the tune of $400,000 more per restaurant… Roughly 65 percent of the U.S. population ordered a breaded chicken sandwich from a quick-service restaurant in the last six months.”