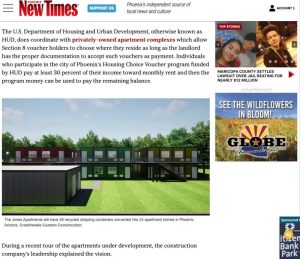 The original story was featured in the print edition of the Phoenix New Times in March of 2022.

When the cost of a single-family home hewn from wood and traditional construction materials is out of reach for many low-income Phoenix residents, and hell, some middle-income earners too — the concept of what constitutes a suitable house is likely to change.

And some residents might be more willing to live in tiny apartments under 500 square feet, even used shipping containers.

At least that’s what Mesa-based homebuilder Luke Crosthwaite, who is sitting on a sandy lot of two dozen used shipping containers is banking on will happen as Arizona residents are looking for alternatives to a crushing housing market for both home purchases and rentals alike.

The owners of Crosthwaite Custom Construction have been collecting a “monster garage” of tiny container homes in Apache Junction on the site of All-Star Storage.

The company is under contract with a local housing developer to deliver by truck an entire apartment complex made of old shipping containers to the 900 block of East Jones Avenue in Phoenix by the end of May.

Low-income renters could snap up the apartments for $1,000 a month each, but when government assistance is applied to the rent, individuals would pay $300 a month out of pocket.

The project in South Phoenix, 927 Jones Apartments LLC, is owned by Steve Villarreal, city planning documents show. It was not immediately clear how much the development cost to construct or if there were any outside investors. 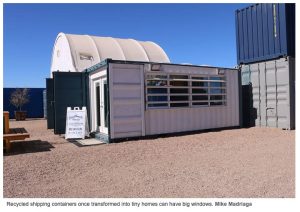 Villarreal told Phoenix New Times that the project was just an idea a few years ago and “now it’s coming to fruition.”

While some affordable housing projects in Arizona are public-private partnerships with government entities such as the city of Phoenix, this development is not, according to city records.

Individuals can apply to live at the new apartment complex by sending an email to info@927jones.com but income restrictions could apply, according to the construction company. Click here to read the full article.