Off-roaders head to desert but watching for thieves

On the morning of April 23, Jasmine King and her family’s flatbed trailer was stolen from the front of their Escondido home.

“People are getting desperate,” she said to me on May 9, “there’s been a recent problem with off-road [vehicle] theft ….” 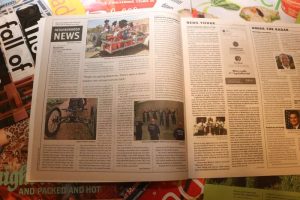 The original story was featured in the print edition of the San Diego Reader on May 12, 2020.

“Some friends of ours in the desert were robbed during the same week, and the thieves used a torch cutter to break into their shipping container which is the same thing we use to store all our stuff on our desert property. So we decided we would haul everything home and store it here until we could figure out a way to make it more secure out there.”

“And there is another person who had his trailer and buggy stolen this past week from a neighborhood not too far from ours.”

I reached out to the owner of the stolen trailer and buggy for an update, but I didn’t receive a reply. On May 4 he posted Facebook photos and captioned them in part: “This buggy/trailer was stolen last night from here in Escondido. A neighbor caught a video [but] it’s hard to tell, but looks like a smaller Dodge truck that took it between 3:40 am – 3:50 am.”

Then on May 7, King’s neighbor reported that her Toyota off-road truck was stolen from an assigned apartment carport.

“I have seen friends sharing and posting about a lot of stolen toys,” said Yolie Stover, founder of Off Road Girl Loves Baja, “well actually trailers with bikes, quads, UTVs. Some are recovered, but not all.”

Stover, from Alpine, covers off-roading on both sides of the border. She has over 19,000 followers on her Facebook page. “Mostly all the stolen trailers, trucks, and RVs, are in desert areas like in Glamis and Ocotillo.”

Many San Diego County off-roaders took to the desert and camped out during our county’s lockdown; some prefer to drive their off-road toys up the ramp and onto the trailer the night before to avoid “rev bombing” and waking up the neighbors the next morning.

“It’s only neighborly to load ‘em up the day before,” opined John, a local mechanic that rides his souped-up 3-wheeler up Superstition Mountain, ”but make sure you unhinge your trailer first, then box it in (with vehicles). With people losing their jobs and shit, bro, sad to say, but some peeps are on the prowl and lookin’ for easy come-ups.”

Local off-roaders are installing GPS trackers onto their toys and haulers, while others are going old school, running chains and locks throughout the trailer, pull vehicles, and toys; some spend thousands on aftermarket upgrades.

Ryan R. lives north of Fallbrook. “If I don’t block my trailer with the truck, I set an alarm sensor on the ground pointing straight up at the hitch, that way cars driving by don’t set it off. It’s very loud, but not as loud as the sound of my Glock if the alarm ever goes off. Only thing is, you have to take off your flags because the flags will set it off at night.”

Ryan takes his 300-foot motion sensor setup, which can be purchased on Amazon or Home Depot for $29.95, out to the desert.

“I even leave it set up during the day because the alarm is so loud. I’ve even heard of people stealing ice chests and stuff. I think if people heard the alarm going off if they were roaming around your camp when you’re on a ride, it would scare them enough to make them leave.”

“Please be on the lookout for this bike,” posted Shane in part on Facebook on May 1. “It belongs to my brother, who is a paraplegic. It was stolen from his storage unit at an apartment complex in the USD/ Mission Valley area. It is a Sport-On Explorer III [handcycle] with [an Rohloff] internal rear hub. This is not a bike you see every day on the trails and sticks out like a sore thumb.”