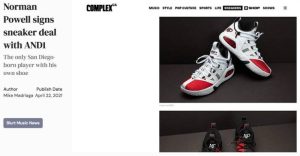 The original story was published in the print edition of the San Diego Reader on April 22, 2021.

A sense of elation followed by pride broke out among San Diego hip-hoppers and sneakerheads last month when Lincoln High alumnus, Norman Powell, signed a sneaker deal with AND1.

“Powell is currently the only San Diego-born player with his own shoe,” said local hip-hop head and sneaker dealer Dante Rowley. “Powell signing with AND1 is a great decision; it’s every player’s dream to get his or her signature shoe and is also almost next to impossible.”

“It has been a dream come true to be able to be one of the faces for AND1 and to be able to partner with them,” Powell said in a statement. “I grew up watching AND1 mixtapes, and now to be a part of the brand is surreal.”

“It’s all about the hype and the swag of the ballplayers,” Degracia explained. “When you got that type of music in the background, it creates a feeling as if you’re there, and it adds another element to the highlights.”

Back in ’98, Foot Action, a subsidiary of Foot Locker, reportedly hooked up their clientele with about 200,000 complimentary AND1 Mixtape Volume 1 VHS tapes. The formula was a success and “made AND1 a household name in the mid-2000s. Every kid used to emulate the moves of ‘Skip to my Lou’ aka Rafer Alston [on the video],” Rowley recounted.

Powell’s Attack 2.0 sneakers should be available in early fall. “Are you going to rock them on your hip-hop sets?” I asked Degracia.

“Yes, they look cool and seem to be good hooping shoes, but more so in support of a San Diego native.”

Ryan Anthony, a Spring Valley rapper, wrote that he’s “fasho finna get em” on an Instagram post. “…The AND1 sponsorship is legendary.”

Complex magazine re-posted AND1’s teaser flicks of Powell’s basketball shoes in black and red, and white and red colorways with Powell’s “NP” logo embroidered either by the heel or on the tongue.

Reports state that Powell’s sneakers will ship to Foot Locker Canada stores, but there was no word on if or when they’ll arrive in San Diego Foot Locker locations.

Rowley is known to source rare sneakers for his Rosewood store in the Gaslamp District; he supplies rappers and basketball players from all parts of the world.

“San Diego had a connection to AND1 before Powell,” says Rowley. “When Jamaal Franklin from SDSU went pro, he was also signed by AND1. Anytime a player gets his own shoe, it is a big deal because kids growing up now will remember that player even if they end up fizzling out.”

Degracia added that his SDSU alumni already have a couple of Nike basketball shoes floating around. “Those 2011 SDSU sneakers are customs, and I would love to have a pair. I believe the [Kick Factory 619] utilized a pair of hi-top Nike SB dunks, and since the SBs have made a huge comeback over the past year, that could add a lot of value to them.”

The original, circa 1998 AND1 Mixtape VHS tapes featuring rappers Mos Def, Sadat X, and GZA are available for sale on eBay for $18.50.