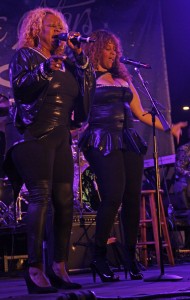 On Oct. 10, the ticket was labeled as the Mary Jane Girls (MJG), but there was only one original member singing — Candice “Candi” Ghant.

Ghant played the supermodel role of the foursome in 1983.

Maxi & Cheri Wells were both not present at this concert held at the Qualcomm Stadium Practice Field.  TMZ reported on November 20, 2013, that the Rick James’ estate sued the two for “… when the group broke up, Rick kept the name and the music for himself,” and not supporting the two members to use the MJG name.

Regardless of the legalities and missing members, the trio this night performed on-point. Their songs and dance routines looked just as the group’s MTV videos from 30 years ago.

“Candy Man”, “Boys”, “In My House” and “All Night Long” were performed. The finale of the set was James’s “Mary Jane” jam which brought about the crowd to chant the “na na na” portion of the song. The marijuana smoke in the Qualcomm Stadium Practice Field air was reminiscent to what the name stood for in 1978.

Midnight Star, Heatwave and Dazz Band also performed this night at the event called the “Magic Under the Stars.”