Marriott strike – from both sides 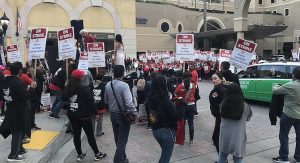 By Mike Madriaga
On October 13, as we neared The Westin San Diego Gaslamp Quarter, next door to Horton Plaza, the chants of the strikers in red shirts became louder.

At the glass door entrances by the hotel loop, there were stanchions separating us from two protestors. “We are on strike and we ask you not to spend any money here. All the workers here are on strike; spend money somewhere else.”

They handed me a flyer that read in part, “DO NOT SLEEP, MEET, OR EAT IN THIS HOTEL. We are NOT taking out the trash, cooking the food, or cleaning the rooms.”

As we entered the 4-star hotel’s doorways at about 7:30 pm, we were greeted by three men with three-piece suits. I told them I was attending the San Diego International Film Festival (SDIFF) awards ceremony on the fourth floor.

The annual festival transpired on October 10-14.

The front desk staff checked in new arrivals, and the bar near the elevators looked packed with patrons. We took the elevator up and hung out on the patio where the downtown San Diego skyscrapers hovered above and where we could see the protestors down below. At times their chants seemed louder than the music from the speakers.

“The protesting wasn’t bothering me,” said Judy, one of the festival staff members. “Downstairs, they (the protesters) have like a line or barricade going on but it’s easy for attendees to get in.” 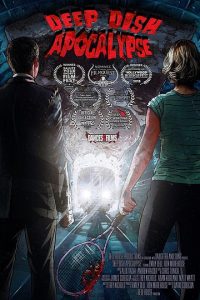 Trey Nichols’ Deep Dish Apocalypse. Nichols made a suggestion for the protestors and the hotel management.

Judy and her co-workers changed from their film festival polo shirt-and-slack uniforms to nightlife gear for the award ceremony that started at 9:30 p.m. They took red carpet photos by the media wall.

Trey Nichols is a Los Angeles-based scriptwriter who wrote “Deep Dish Apocalypse,” a horror-comedy that played on Friday. “I support the labor issue [strike]. The [$14 per hour] is generous if that’s the starting wage, but if that’s the most they can make and they’ve been there for a while and they are not getting other benefits — that’s a travesty.”

“This is one of 23 hotels on strike against Marriott,” said Joe Bagby, one of the protestors standing by the doorway when we first entered. “Westin is a brand of Marriott: the richest and biggest hotel corporation in the history of hotels — and workers are simply asking for a better wage, asking to maintain their health benefits and asking for respect and a fair workload.”

Bagby, 40, from East County, is the organizing director for the UNITE HERE Local 30: a hotel and hospitality workers’ union. “The wages vary, but a lot of folks are making between $14-$16 an hour, and it takes them about half an hour to clean a room,” he continued. “Room rates often are about $200 a night, and it went up this week [because of the film festival]. All we are asking for is a little bit more per hour.”

“But what about the other businesses losing money?” Patricia from the film festival questioned. “Joey probably hasn’t made any money since this started. I feel bad for him because he comes over to us trying to get some shoe-shine business and he’s upset.”

The day before, there were about 75 protesters in front of the Westin and five police officers. To the east of the hotel, inside Horton Plaza, is a United States Post Office branch, and then further to the east was the film festival’s temporary headquarters. Joey Aiello’s shoe shine booth sits in front of the Westin and next door to the Thai Time restaurant which is across the curved street from Panera Bread.

“I’ve lost about $700 in [shoeshining] business,” Aiello said to me after he spoke with a police officer on the scene. “They (the protestors) are killing my business.”

Sean, an electrician, was passing by the Westin earlier in the day. He yelled, “Get a [explicative] job” to the protestors.  I caught up with him in front of the festival headquarters. “I walk by going to work every day and I hear them,” he continued. “Why don’t they just get another job? That’s what I did and that’s what you gotta do ….” 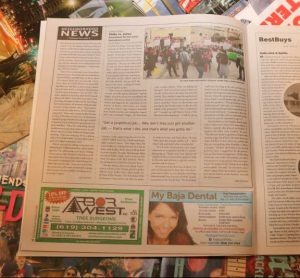 The story premiered in the print edition of the San Diego Reader on October 25, 2018.

A male employee of the festival was not happy with some of the protestors after “they followed the [independent-film fans] from the Westin to here and filmed them (with smartphones). Their problem should be with the Westin and not with our film festival.”

“I heard that 30 percent of the union guys stayed on the job inside,” Aiello continued. “They didn’t all agree with this and if you look around, these are not all workers of the hotel, these are the unions. They attacked a guy driving his truck and they harassed someone going into the doors yesterday.”

“We’ll take frustration and angry responses as recognition that there’s a problem going on,” Bagby from the worker’s union said. “And what we tell neighbors that are tired of the noises is, ‘Talk to Marriott and tell them to sign the contract and this will be all over.’”

By 11 p.m., the festival staff had announced all of the award winners and the after-party continued out on the patio.

Nichols’ short film didn’t win. He made a suggestion for the protestors and the hotel management. “When they can tie the rate of the CEO and the executive management to the people that are working on the bottom level, I think there would be more equity. In Germany and I believe, Japan, there are workers’ representatives on the boards so the workers’ interests are represented.”