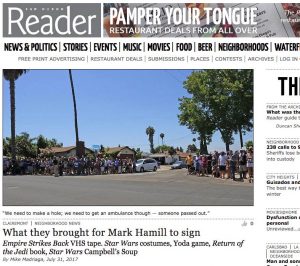 “We don’t have a crowd size,” said Lt. D. Crubbs, “we normally do that [assessment] from a helicopter.”

No Star Wars motif drones flew above either (at the Castleton Drive and Mount Abernathy Avenue cross streets in Clairemont).

On July 30 at about 2:30 p.m., Crubbs, from the San Diego Police Department, was handling some of the crowd awaiting Mark Hamill’s arrival. Hundreds were present to witness the ceremony for the honorary “Mark Hamill Drive” to take place — others just wanted his autograph.

“Everybody here wants an autograph,” Jean said, “I’ve been a fan since 1977 when the first movie came out.”

She had a VHS tape of Empire Strikes Back. “I think it’s this house that I saw on the news,” she said as she pointed by the stage where Hamill stood later, “they have all of these [Star Wars] costumes [and] I wonder if they will get them signed.”

“We need to make a hole,” Crubbs said , “we need to get an ambulance through — someone passed out.”

“It’s because we are all bunched up,” said one collector holding an Ewok plush toy, “it’s hot out here.”

Mercedes, another collector, has been a Star Wars fan for forty years. She lives about two blocks away from Hamill’s old home located at the 5900 block of Castleton Drive — and despite her sweating and getting thirsty, she waited (for two hours) patiently. “This is a [Yoda] game that I have to get signed,” she said, “and I have my [marker] pen ready.”

Many of the people here wanted their items signed because Hamill’s autographed memorabilia sells for top-dollar on the eBay site.

A signed comic book is going for almost $9000, an autographed poster is selling for $4000, and a light-saber with Hamill’s signature on the hilt is auctioning at about $1000.

“This [Return of the Jedi] book is actually mine from 1983,” said Jennifer Sommerfeld. She was posted up across the street and said that she “couldn’t wait to get an autograph.”

“I have a can of [Star Wars] Campbell’s Soup and a Funko action figure,” said Nico Vitali, who was selling lemonade for 50 cents with his buddy Caleb — under his dad Michael Vitali’s supervision.

“When I was nine years old, I use to deliver newspapers (Clairemont Sentinel) to his (Mark Hamill’s) house,” Michael said, “we lived in this neighborhood for 50 years now and our house is about five houses away from his old house.”

Michael said that despite them being about 10 years apart in age, he remembers when “he moved to LA to do acting lessons when he was like 19 or 20.”

Both Nico and Caleb were hoping to get their stuff signed. After all, a Luke Skywalker Funko toy (just like the one on their table) paired with a Han Solo toy, signed by Harrison Ford; are selling for $699.

“He does a lot of appearances for money,” Michael said, “they made it very clear that he wasn’t signing anything.”

John, an autograph hound and collector, was present. “This is the perfect place for us to get autographs because when these guys do good-publicity functions,” he said, “they will never stop and ask for money — and not only that, when they sign stuff in these type of situations, they don’t have time to sign items ‘to someone,’ which kills the value of the signed items.”

At the 2015 Star Wars celebration in Anaheim, they were charging $125 for Hamill’s signature and $70 for the late Carrie Fisher’s,

“And now her autograph sells for lots of money,” John said.

Later this day, after the unveiling of the Mark Hamill Drive street sign, Hamill was witnessed signing items — free of charge.