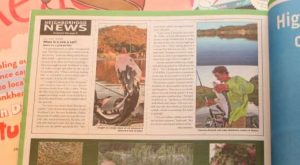 The original story was published in the print edition of the San Diego Reader on October 17, 2019.

I’ve seen thousands of catfish,” George Scalo said, “but I have never seen a catfish look like that before.”

Scalo, a ranger specialist for the city of Escondido, spoke about the piebald catfish caught at Lake Wohlford on Sept. 14. The fish is also referred to as a “cowfish” because of its white and black appearance.

“What a striking looking fish,” Scalo said as we both viewed the cowfish’s photo. “It looks like Shamu.”

“I caught it at about six in the afternoon,” Cameron Gruwell said, “when the lake started getting some shade. It was caught on a large chunk of cut mackerel in about five feet of water, and it weighed about two pounds.”

After I spoke with Gruwell and Scalo on September 25, I searched online. But, unfortunately, I couldn’t find any info on a piebald catfish caught/photographed in San Diego County before the Saturday catch of the 27-year-old construction worker from Valley Center.

“I’ve never even heard about that type of catfish,” said Christa from Smokey’s Lake Wohlford Cafe. Christa sees hundreds, maybe thousands of catfish a year because their cafe is located by the lake and about seven miles east of Escondido. Their circa 1947 cafe sells bait and tackle and offers an all-you-can-eat catfish special for $17. “We even serve catfish and eggs for breakfast,” she added.

“After taking photos, I returned the fish into the lake,” Gruwell continued, “because I wanted someone else to catch it and experience the same stoke I got when I caught it.”

In 2015, another piebald catfish was caught and photographed in Oklahoma. 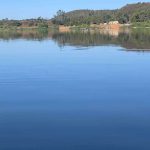 Lake Wohlford. “We even serve catfish and eggs for breakfast.”

“It was just a regular channel catfish,” the Oklahoma Department of Wildlife Conservation reportedly explained to Grind TV. “Piebalds are abnormalities in the animal kingdom. They occasionally occur in almost all animal species. It was just a genetic malfunction.”

“Piebald is defined as spotted or blotched with black and white. The rare catfish was also described as a leucistic catfish, which is essentially the same as piebald.”

Scalo’s been fishing the area since the 1980s and has documented the catches at Lake Wohlford for 15 years. “I’ve seen albino catfish, and they are not that common. But, I’ve never even heard of this before.”